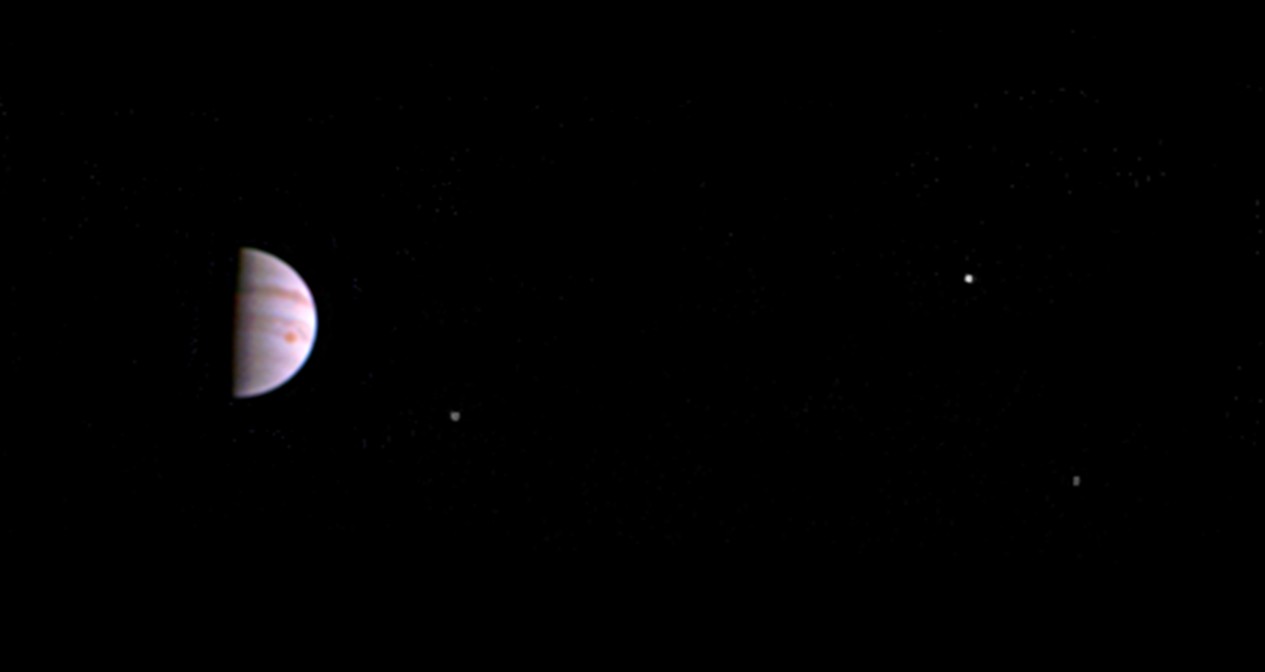 The JunoCam camera aboard NASA’s Juno mission is operational and sending down data after the spacecraft’s July 4 arrival at Jupiter. Juno’s visible-light camera was turned on six days after Juno fired its main engine and placed itself into orbit around the largest planetary inhabitant of our solar system. The first high-resolution images of the gas giant Jupiter are still a few weeks away.

“This scene from JunoCam indicates it survived its first pass through Jupiter’s extreme radiation environment without any degradation and is ready to take on Jupiter,” said Scott Bolton, principal investigator from the Southwest Research Institute in San Antonio. “We can’t wait to see the first view of Jupiter’s poles.”

The new view was obtained on July 10, 2016, at 10:30 a.m. PDT (1:30 p.m. EDT, 5:30 UTC), when the spacecraft was 2.7 million miles (4.3 million kilometers) from Jupiter on the outbound leg of its initial 53.5-day capture orbit.  The color image shows atmospheric features on Jupiter, including the famous Great Red Spot, and three of the massive planet’s four largest moons — Io, Europa and Ganymede, from left to right in the image.

“JunoCam will continue to take images as we go around in this first orbit,” said Candy Hansen, Juno co-investigator from the Planetary Science Institute, Tucson, Arizona. “The first high-resolution images of the planet will be taken on August 27 when Juno makes its next close pass to Jupiter.”

JunoCam is a color, visible-light camera designed to capture remarkable pictures of Jupiter’s poles and cloud tops. As Juno’s eyes, it will provide a wide view, helping to provide context for the spacecraft’s other instruments. JunoCam was included on the spacecraft specifically for purposes of public engagement; although its images will be helpful to the science team, it is not considered one of the mission’s science instruments.

The Juno team is currently working to place all images taken by JunoCam on the mission’s website, where the public can access them.

During its mission of exploration, Juno will circle the Jovian world 37 times, soaring low over the planet’s cloud tops — as close as about 2,600 miles (4,100 kilometers). During these flybys, Juno will probe beneath the obscuring cloud cover of Jupiter and study its auroras to learn more about the planet’s origins, structure, atmosphere and magnetosphere.

Source: Press release from NASA.gov republished under public domain rights and in compliance with the NASA Media Usage Guidelines.