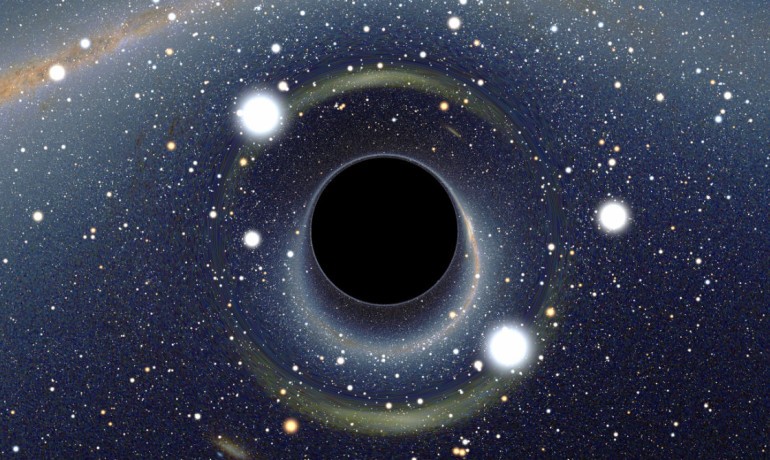 For all their extraordinary power, black holes are not immortal.

They have a life cycle just like we do. Forty years ago Stephen Hawking, the world’s foremost expert on black holes, announced that they evaporate and shrink because they emit radiation.

But if a black hole evaporates and shrinks, what happens to everything it devoured during its lifetime?

Most mathematical calculations have suggested that the information and everything else inside the black hole simply vanishes, a conclusion that raised more questions than it has answered.

A calculation of the black hole’s evaporation seemed impossible, unless a full theory of quantum gravity that unites Einstein’s general relativity with the framework of quantum field theory could be found.

HAWKING’S THEORY, BUT WITH A TWIST

Adami and colleague Kamil Bradler of the University of Ottawa have developed a new theory that allows them to follow a black hole’s life over time. What they find is striking: Whatever quantum mysteries were hiding behind the black hole event horizon—the invisible boundary of a black hole—slowly leak back out during the later stages of the black hole’s evaporation.

With this finding, a major black hole physics problem is avoided. Physicists have argued strenuously that it was not possible that all quantum information could remain hidden within the black hole when it shrunk to minute sizes.

It turns out that to show that black holes do not destroy information forever as they evaporate, Adami and Bradler did not have to create the elusive theory of quantum gravity. Instead, they used Hawking’s own theory, but with a twist.

To understand how a black hole would interact directly with the Hawking radiation it generates, Adami and Bradler used a set of sophisticated mathematical tools and high-performance computers to evolve the black holes over sufficiently long times until they were able to find quantum information outside of the black holes.

“To perform this calculation, we had to guess how a black hole interacts with the Hawking radiation field that surrounds it,” Adami says. “This is because there currently is no theory of quantum gravity that could suggest such an interaction. However, it appears we made a well-educated guess because our model is equivalent to Hawking’s theory in the limit of fixed, unchanging black holes.”

“While our model is just that—a model—we were able to show that any quantum interaction between black holes and Hawking radiation is very likely to have the same properties as our model,” Bradler says.

The theory was able to reproduce a feature long searched for in black hole physics, the so-called “Page curves,” named after University of Alberta physicist Don Page. His model predicted the curves that show the quantum information first entering, then exiting the black hole. Adams and Bradler’s calculation is the first that yielded curves just like those Page had anticipated.

But much work remains to be done. In principle, the team’s guess should follow from the yet-to-be-discovered fundamental unified theory of quantum gravity. But in the absence of proof of that theory, the success of Adami and Bradler’s theory may give hints as to just how such a theory—one that goes beyond Hawking’s—could be constructed.

In the new era of gravitational wave observatories that the LIGO discovery just ushered in, such a theory may even one day be tested.

Adami and Bradler’s theory is published in Physical Review Letters.

Source: Republished from Futurity.org as a derivative work under the Attribution 4.0 International license. Original article posted to Futurity by Kim Ward-Michigan State.