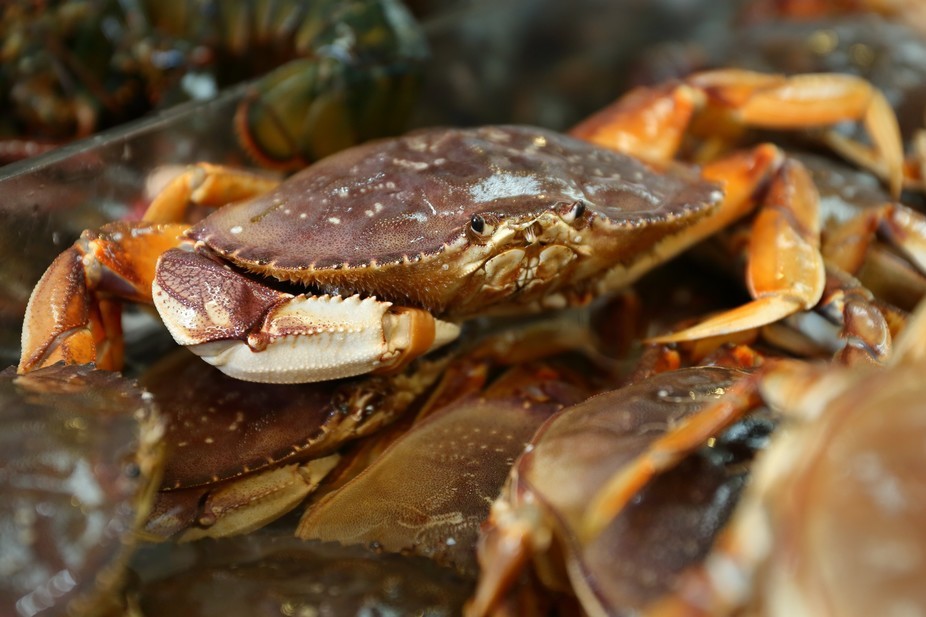 Many travelers visit the Pacific Northwest to eat the region’s famous seafood – particularly Dungeness crabs, which are popular in crab cakes or wrestled straight out of the shell. Locals also love catching and eating the feisty creatures. One of my favorite ways to spend an afternoon is fishing for Dungeness crabs from a pier in Puget Sound with my daughter. We both enjoy the anticipation of not knowing what we will discover when we pull up the trap. For us, the mystery is part of the fun.

But for commercial crabbers who bring in one of the most valuable marine harvests on the U.S. West Coast, that uncertainty affects their economic future.

In my day job as a research ecologist with the National Oceanic and Atmospheric Administration’s Northwest Fisheries Science Center, I study how changes in seawater’s acidity from absorbing carbon dioxide in the air, referred to as ocean acidification, may affect the success of recreational crabbers like me and the fortunes of the crabbing industry.

Contrary to early assumptions that acidification was unlikely to have significant effects on Dungeness crabs, we found in a recent study that the larvae of this species have lower survival when they are reared in the acidified ocean conditions that we expect to see in the near future. Our findings have sobering implications for the long-term future of this US$170 million fishery.

Ocean acidification is a global phenomenon that occurs when we burn fossil fuels, pumping carbon dioxide (CO2) into the atmosphere. Some of that CO2 is absorbed by the ocean, causing chemical changes that make ocean water more acidic, which can affect many types of marine life. The acidification taking place now is the most rapid change in ocean chemistry in at least 50 million years.

Many organisms, including numerous species of fish, phytoplankton and jellyfish, do not seem to be greatly affected by these changes. But some species – particularly oysters, corals and other organisms that make hard shells from calcium carbonate in seawater – die at a higher rate as the water in which they are reared becomes more acidic. Acidification reduces the amount of carbonate in the seawater, so these species have to use more energy to produce shells.

Dungeness crabs make their exoskeleton primarily from chitin, a modified polysaccharide similar to cellulose, that contains only small amounts of calcium carbonate. Initially, scientists predicted that the species would experience relatively limited harm from acidification. However, recent experiments in our lab led by graduate student Jason Miller suggest that Dungeness crabs are also vulnerable.

In these experiments we simulated CO2 conditions that have been observed in today’s ocean and conditions we expect to see in the future as result of continued CO2 emissions. By raising Dungeness crab larvae in this “ocean time machine,” we were able to observe how rising acidification affected their development.

Dungeness crabs’ life cycle starts in autumn, when female crabs each produce up to two million orange eggs, which they attach to their abdomens. The brooding females spend the winter buried up to their eye stalks in sediment on the sea floor with their egg masses tucked safely under a flap of exoskeleton.

In spring the eggs hatch, producing larvae in what is called the zoea stage – about the size of a period in 12-point type. Zoea-stage crab larvae look nothing like adult crabs, and have a completely different lifestyle. Instead of lurking on the bottom and scavenging on shrimp, mussels, small crabs, clams and worms, they drift and swim in the water column eating smaller free-swimming zooplankton.

After molting through five different zoea stages, which all look pretty similar, the larvae reach the megalopae stage when they are about two months old. Next they molt into the benthic juvenile stage, which looks a lot like an adult crab, and settle to the sea floor. The crabs finally reach adulthood about two years after hatching.

In our experiment, divers collected brooding female Dungeness crabs from the bottom of Puget Sound in Washington state. We reared larvae produced from these females in three different CO2 levels that roughly corresponded to acidification levels now (pH 8.0), levels projected to be relatively common at midcentury (pH 7.5) and levels expected in some locations by the end of the century (pH 7.1). The pH scale measures how acidic or basic (alkaline) a substance is, with lower pH indicating a more acidic condition and a decrease of one unit (i.e., from 8 to 7) representing a tenfold increase in acidity. This means that the ocean today (average pH 8.1) is about 25 percent more acidic than the ocean in pre-industrial times (pH 8.2) and the ocean of the future is expected to be about 100 percent more acidic than today.

Describing exactly how acidic Puget Sound is now or could be in the future is complicated, because CO2 levels in different parts of the Sound vary widely and there are seasonal shifts. Generally, however, Puget Sound is naturally more acidic than other parts of the ocean because currents bring acidic waters from the deep ocean to the surface there. But shellfishermen are concerned because human-produced CO2 is causing large changes on top of these background levels of variation.

We found that although eggs reared in high-CO2 water hatched at the same rate as those in lower-CO2 water, fewer than half as many of the larvae reared in highly acidic conditions survived for more than 45 days compared to those raised under current conditions (Figure 2). Put another way, the mortality rate in acidified conditions was more than twice as high as in more contemporary CO2 conditions. Crabs raised in more acidic water also developed more slowly, and fewer of them reached the 4th zoeal stage compared to larvae raised in less-acidic water. This slower development rate probably reflected the extra energy that larvae had to expend to grow in a more acidic environment.

We are not entirely sure what these results mean for future populations of Dungeness crabs, but there is reason for concern. Significantly lower larval survival may translate into fewer adult crabs, which will have ripple effects on the fishery and Pacific coastal food webs.

Slower larval growth could lead to a mismatch in the timing of predators and prey. Crab larvae depend on finding abundant prey during certain times of the year, and organisms such as Chinook salmon and herring that prey on crab larvae depend on an abundance of crabs at particular times of the year. Any factor that disrupts the timing of development can have important ecological consequences.

Dungeness crab are found along the Pacific coast from California to Alaska, and over that range they experience wide variations in water temperature, ecological communities and pH. It is possible that individual crabs may be able to tolerate new CO2 conditions during their lives – in other words, to acclimate to the changes. Or if some crabs are just better able to tolerate high-CO2 conditions more easily than others, they may pass on that ability to their offspring, allowing the species to adapt to rising acidification through evolution. Our next studies will examine how Dungeness crabs may acclimate or adapt to increasing acidification.

Today Dungeness crab populations are generally in good condition, and my daughter and I usually come home from our crabbing adventures victorious. It is hard to imagine that this abundant species is at risk in the coming decades, but we need to anticipate how it could be affected by acidification. For Dungeness crabs and many other species, it is essential to understand how human actions today could alter sea life in tomorrow’s oceans.

Jason Miller, a former biologist at NOAA’s Northwest Fisheries Science Center and graduate student at the University of Washington, was lead author of the Dungeness crab larval exposure study on which much of this article is based.