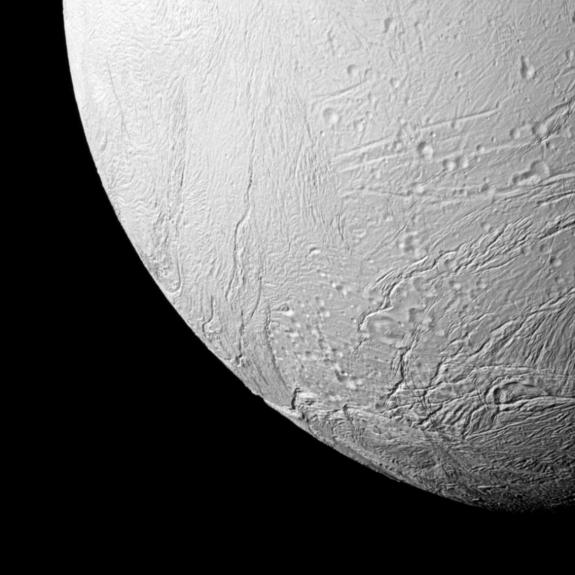 There has been some debate in the astronomical science community about Enceladus, one of Saturn’s moons that has been closely studied for over 7 years.  The debate has focused on whether Enceladus has a global ocean, or whether the observations of amazing geysers of water around the south pole of the moon mean that there was simply a small ocean concentrated there.

An excellent article on Space.com spills the beans. After all those years of observations, they report that the startling conclusion to this very hard problem is thus:

The smoking gun is the very slight wobble that Enceladus displays as it orbits Saturn. This unsteady motion is effectively the result of water sloshing around inside Enceladus, and could not appear if the moon were made of ice all the way to its core. Instead, the moon must contain a complete ocean layer, according to new research that relied on more than seven years of images taken by NASA’s Cassini space probe.

“This was a hard problem that required years of observations, and calculations involving a diverse collection of disciplines, but we are confident we finally got it right,” Peter Thomas, lead author of the new work and a Cassini imaging team member at Cornell University, said in a statement from the Cassini imaging team.

Thomas and his colleagues studied images of Enceladus to precisely measure changes in its rotation, then ran several simulations to determine how the interior of the moon would affect those wobbles.

The article explains how Thomas and his team painstakingly analyzed the available data to come to their stunning conclusion that there is a global ocean underneath a thin, icy crust:

“If the surface and core were rigidly connected, the core would provide so much dead weight the wobble would be far smaller than we observe it to be,” co-author Matthew Tiscareno, a Cassini participating scientist at the SETI Institute in California, said in the same statement.

“This proves that there must be a global layer of liquid separating the surface from the core.”

There are more mysteries to be solved regarding this amazing discovery, but for now you can read all of the details in the excellent article on Space.com.