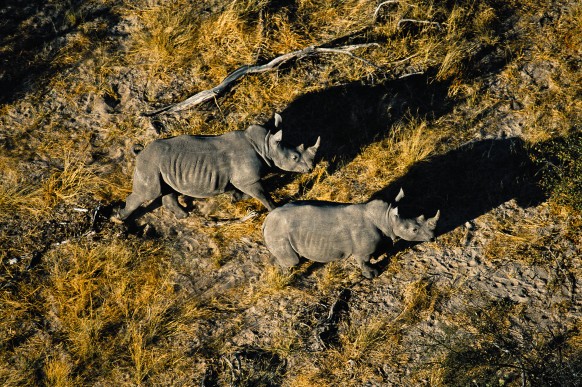 A really insightful article on WIRED’s website explores the ramifications of that dilemma. To resurrect or not to resurrect, that is the question… In the sad case of the Northern White Rhino, it may be that either choice is a bad one, even though it may be technically possible.

As the WIRED article explains:

At the Scripps Research Institute, regenerative medicine researcher Jeanne Loring has figured out how to make induced pluripotent stem cells, capable of transforming into any cell type in the body, out of rhino skin. She and her team are now working out how to turn them into rhino eggs and sperm. If successful, they should be able to create new rhinos via in vitro fertilization, saving the animal from extinction—or more likely, bringing it back from the dead.

The white rhino isn’t the only beast on the verge of resurrection. For species that are already wholly extinct, scientists are turning to massive caches of animal and plant cells stored in deep-freeze repositories like the Cryo Collection, buried in the bowels of the American Museum of Natural History. Others are using a method called anthropogenic hybridization—crossbreeding a dying species with a similar, living one so that some of its characteristics survive.

With these methods and others, biologists may soon be able to bring animals back from the dead. That’s a thrilling but distinctly unnatural approach to preserving nature. And some scientists and conservationists are asking if resurrection is really the right way to save the Earth’s threatened species.

The article goes on to explain that the Northern White Rhino is a dying species because it has been hunted to the brink of its now inevitable extinction due to the commercial demand for its horn. So, if Loring’s experiments eventually produce a new rhino, it couldn’t be released into the wild because poachers would likely kill it.

So where will they live? The article continues:

Zoos. Loring calls her work “Jurassic Park without the scary parts,” in part because her newly-birthed science experiments might only ever get to roam in a living museum. Some question whether preserving wildlife is valuable if it can’t live in the wild. “A tiger in a zoo isn’t really a tiger anymore because it’s not doing its thing,” [says] the environmental ethicist Holmes Rolston III.

An animal robbed of its natural home is hardly an ideal solution, Loring recognizes. “I don’t want to rescue an animal that’s going to exist only in a zoo,” she says. “But it’s probably better than not having it at all.”

But one wonders, is the potential resurrection of species just humanity’s way of trying to “play god?” After all, who determines which species get to come back and which don’t?

…the attempt to save the white rhino might have another driver: human self-interest. Fifty years ago, scientists successfully cloned carp, currently a vulnerable species. But using that technology to increase the fish’s numbers isn’t nearly as attractive as the redemption story of bringing back the white rhino from the brink of extinction. It’s estimated that human activity is causing Earth’s species to go extinct at 100 times their natural rate. But only those species that have earned favor among humans—or make us feel especially guilty—get a lifeline. “I’m not saving mosquitos,” says Loring. “Trust me.”

So should humanity save our chosen species out of guilt for causing their extinction?  It’s an open question, and one that is sure to be debated in years to come if Loring’s research pans out.

For more fascinating discussion of the moral dilemma of resurrecting species, see the excellent article on the WIRED website.

Source: WIRED.com – “Biologists Could Soon Resurrect Extinct Species. But Should They?”