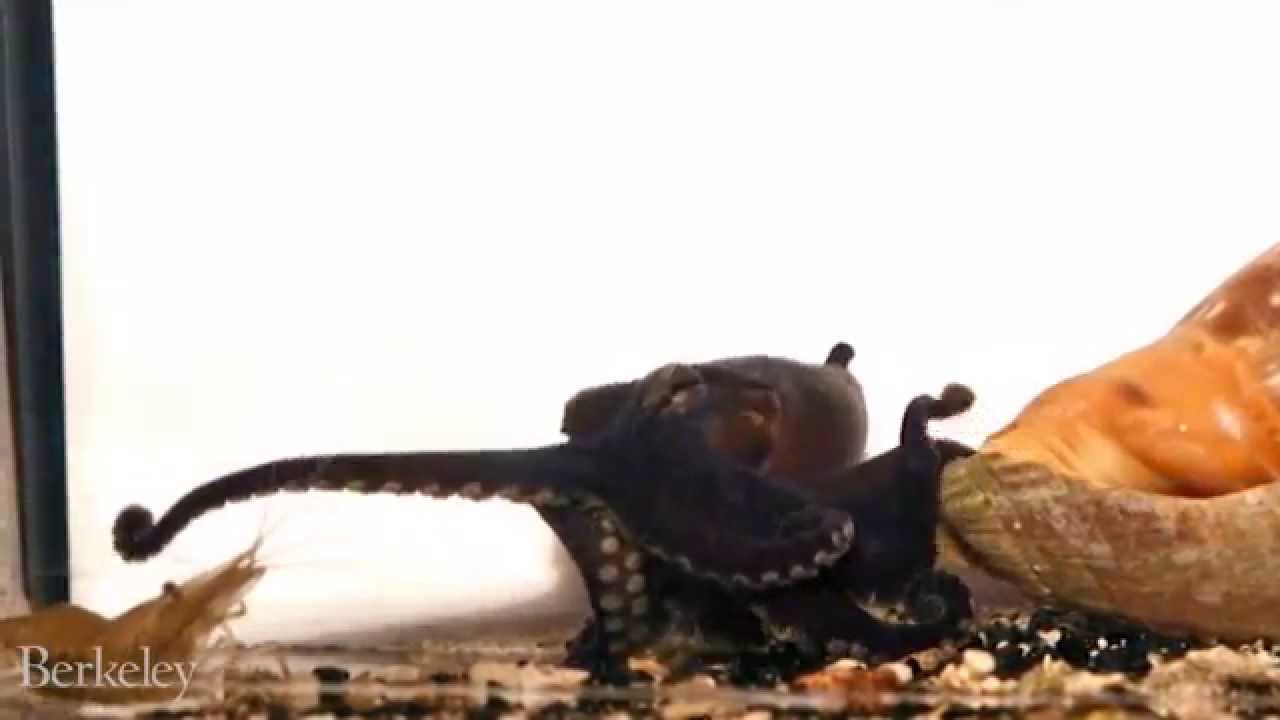 Unlike most octopuses, which tackle their prey with all eight arms, a rediscovered tropical octopus subtly taps its prey on the shoulder and startles it into its arms.

“I’ve never seen anything like it,” says Roy Caldwell, professor of integrative biology at the University of California, Berkeley. “Octopuses typically pounce on their prey or poke around in holes until they find something.

“When this octopus sees a shrimp at a distance, it compresses itself and creeps up, extends an arm up and over the shrimp, touches it on the far side, and either catches it or scares it into its other arms.”

The creature, known as the larger Pacific striped octopus, also turns out to be among the most gregarious of known octopuses. While most species are solitary, these have been seen in groups of up to 40 off the Pacific coasts of Nicaragua and Panama.

And while male octopuses typically share sperm with females at arm’s length, ready to flee should the female get aggressive or hungry, mating pairs of this octopus when observed in captivity sometimes cohabit in the same cavity for at least a few days while mating, with little indication of escalated aggression.

Mating pairs have even been observed to share meals in an unusual beak-to-beak position. They do engage in rough sex, however. The pair grasp each other’s arms sucker-to-sucker and mate beak-to-beak, as if kissing. The females mate frequently and lay eggs over several months, whereas the females of most known octopuses die after a single brood.

The peculiar behaviors seen in the larger Pacific striped octopus are actually a testament to how little is known about most octopuses. While their behavior and neurobiology have been extensively studied, most research is based on observations of just a handful of the more than 300 species of octopus worldwide, Caldwell says.

“There are a lot of species of octopus, and most have never even been seen alive in the wild and certainly haven’t been studied.”

Panamanian biologist Arcadio Rodaniche first observed much of this strange behavior in the 1970s while studying captured specimens in a saltwater swimming pool in Panama. The behavior was so at odds with accepted octopus behavior, however, that he was unable to publish more than an abstract. The species has still not been officially described and has no scientific name.

Caldwell, too, once doubted the brief description of the octopus’s behavior, and only stumbled across the species while pursuing a smaller relative, Octopus chierchiae, on the Pacific coast of Central America. Both are “harlequin” octopuses, so called because of their semi-permanent stripes and spots. The animal lives in water between 40 and 50 meters (150 feet) deep, typically on muddy, sandy plains at the mouths of rivers, probably living in cast-off shells or rock cavities. Females grow to less than 7 centimeters across (3 inches), while males max out at less than 4.5 centimeters (2 inches).

‘DENIZENS OF THE DEEP’

For a new study, published in the journal PLOS ONE, Caldwell and coauthor Richard Ross of the California Academy of Sciences obtained 24 live specimens from a pet supplier between 2012 and 2014 and observed them in their laboratories. Ross even put some on display at the academy’s Steinhart Aquarium, where guests could have observed several pairs mating daily and producing multiple clutches of eggs.

“Personally observing and recording the incredibly unique cohabitation, hunting, and mating behaviors of this fascinating octopus was beyond exciting—almost like watching cryptozoology turn into real-life zoology,” Ross says. “It reminds us how much we still have to learn about the mysterious world of cephalopods.”

“Each time a different type of octopus is studied, we need to redefine our theories about their behavior. It turns out most don’t live up to their ‘denizen of the deep’ reputation,” says former UC Berkeley doctoral student Christine Huffard of the Monterey Bay Aquarium Research Institute.

In these captive environments, the biologists observed females laying eggs for up to six months and brooding for up to eight months. Even after their eggs began hatching, females continued to feed, mate, and lay hundreds more eggs—another unusual behavior.

The larger Pacific striped octopus exhibits a striking high-contrast display of colors and patterns, which can vary from a pale to dark reddish-brown hue to black with white stripes, and spots with both smooth and uneven skin textures.

“They certainly respond to one another when they display their highly contrasting stripes and spots, so their coloration appears to be useful for group living,” Caldwell says. “Nevertheless, while they tolerate one another and sometimes pair up, I don’t think they are highly social.

“Only by observing the context in which these behaviors occur in the wild can we begin to piece together how this octopus has evolved behaviors so radically different from what occurs in most other species of octopus,” he says.