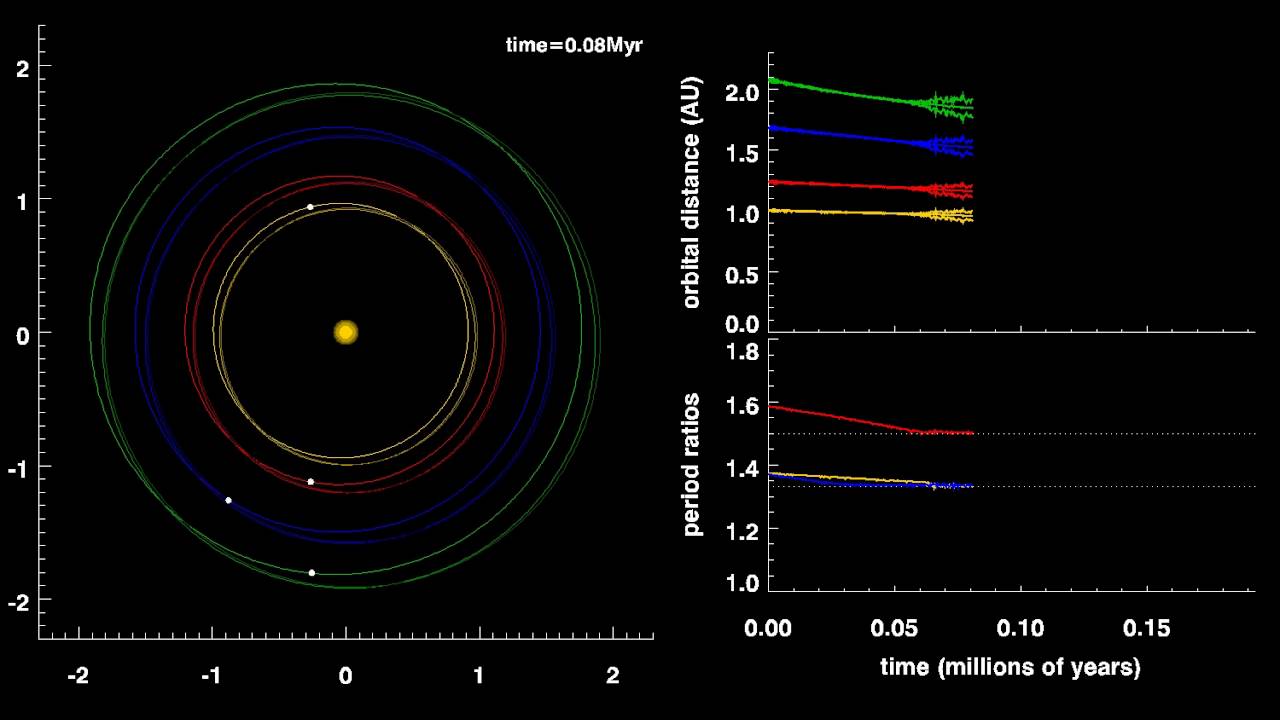 Astronomers searching for planets using NASA’s Kepler telescope have found an extraordinary family of four. Their orbits are so carefully timed that they provide long-term stability for their planetary system.

Throughout the Kepler-233 system, the dance is much more elaborate.

“The orbital periods of the four planets of the Kepler-233 system have ratios of exactly 3 to 4, 4 to 6, and 6 to 8,” says Eric Ford, a professor of astronomy and astrophysics at Penn State and a member of the research team.

All four of the puffy, gaseous planets are far more massive than Earth and orbit extremely close to their nearest star—closer than Mercury is to our sun. The scientists used data from NASA’s Kepler telescope to measure how much starlight each of the four planets block as they pass in front of their star, and to detect slight changes in each of the planets’ orbits. Combining observations from Kepler and the Keck Observatory, the team was able to infer the planets’ sizes and masses.

Their orbits raise the question of whether the gas giants in our solar system somehow escaped a similar configuration in the distant past.

“Exactly how and where planets form is an outstanding question in planetary science,” says Sean Mills, a graduate student at the University of Chicago and lead author of the study in Nature. “Our work essentially tests a model for planet formation for a type of planet we don’t have in our solar system.”

Because the orbital configuration is so different than the one in our system, Mills says, there’s a big debate about how such planets form, how they got there, and why Earth’s system turned out as it did.

The Kepler-223 system provides alternative scenarios for how planets form and migrate in a planetary system that is different from our own, says study coauthor Howard Isaacson, a research astronomer at the University of California, Berkeley, and member of the California Planet Search Team.

Thanks to observations of Kepler-223 and other exoplanetary systems, “We now know of systems that are unlike the sun’s solar system, with hot Jupiters, planets closer than Mercury or in between the size of Earth and Neptune, none of which we see in our solar system. Other types of planets are very common,” says Isaacson.

Some stages of planet formation can involve violent processes, but during other stages, planets can evolve from gaseous disks in a smooth, gentle way, which is probably what the sub-Neptune planets of Kepler-223 did, Mills says.

That process differs completely from the one that scientists believe led to the formation of Earth, Mercury, Venus, and Mars, which likely formed in their current orbital locations.

Earth formed from Mars- or moon-sized bodies smacking together, Mills says, a violent and chaotic process. When planets form this way their final orbital periods are not near a resonance.

But scientists suspect that the solar system’s larger, more distant planets of today—Jupiter, Saturn, Uranus, and Neptune—moved around substantially during their formation. They may have been knocked out of resonances that once resembled those of Kepler-223, possibly after interacting with numerous asteroids and small planets (planetesimals).

“These resonances are extremely fragile,” Fabrycky says. “If bodies were flying around and hitting each other, then they would have dislodged the planets from the resonance.”

But Kepler-223’s planets somehow managed to dodge this scattering of cosmic bodies.

Other processes, including tidal forces that flex the planets, also might cause resonance separation.

“Many of the multi-planet systems may start out in a chain of resonances like this, fragile as it is, meaning that those chains usually break on long timescales similar to those inferred for the solar system,” Fabrycky says.

Mills and Fabrycky’s Berkeley collaborators were able to determine the size and mass of the star by making precise measurements of its light using the high-resolution Eschelle spectrometer on the 10-meter Keck I telescope atop Mauna Kea in Hawaii.

“The spectrum revealed a star very similar in size and mass to the sun but much older—more than six billion years old,” Isaacson says. “You need to know the precise size of the star so you can do the dynamical and stability analysis, which involve estimates of the masses of the planets.”

Source: Republished from Futurity.org as a derivative work under the Attribution 4.0 International license. Original article posted to Futurity by Steve Koppes-Chicago.