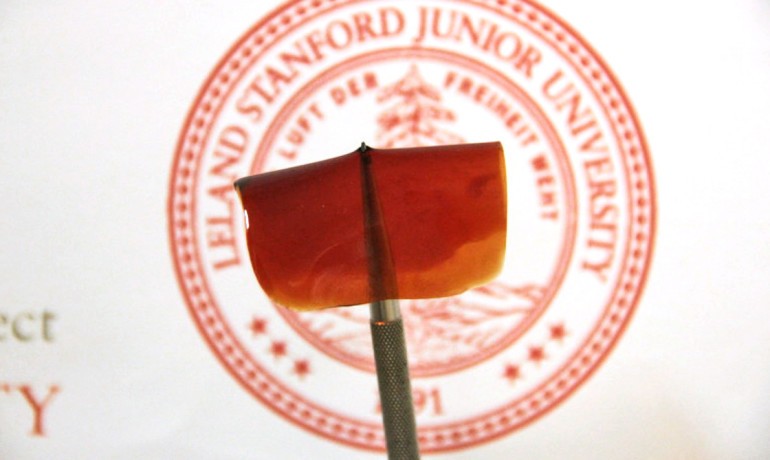 Jolting a super-stretchy, self-healing material with an electrical field causes it to twitch or pulse in a muscle-like fashion. The polymer can also stretch to 100 times its original length, and even repair itself if punctured.

Cheng-Hui Li, working in the Stanford University lab of chemical engineering professor Zhenan Bao, wanted to test the stretchiness of a rubberlike type of plastic known as an elastomer that he had just synthesized. Such materials can normally be stretched two or three times their original length and spring back to original size. One common stress test involves stretching an elastomer beyond this point until it snaps.

But Li, a visiting scholar from China, hit a snag: The clamping machine typically used to measure elasticity could only stretch about 45 inches. To find the breaking point of their one-inch sample, Li and another lab member had to hold opposing ends in their hands, standing further and further apart, eventually stretching a 1-inch polymer film to more than 100 inches.

“I said, ‘How can that be possible? Are you sure?’” she recalls.

In the journal Nature Chemistry, the researchers explain how they made this super-stretchy substance. They also showed that they could make this new elastomer twitch by exposing it to an electric field, causing it to expand and contract, making it potentially useful as an artificial muscle.

SELF-HEALING IN THE COLD

Artificial muscles currently have applications in some consumer technology and robotics, but they have shortcomings compared to a real bicep, Bao says. Small holes or defects in the materials currently used to make artificial muscle can rob them of their resilience. Nor are they able to self-repair if punctured or scratched.

But this new material, in addition to being extraordinarily stretchy, has remarkable self-healing characteristics. Damaged polymers typically require a solvent or heat treatment to restore their properties, but the new material showed a remarkable ability to heal itself at room temperature, even if the damaged pieces are aged for days. Indeed, researchers found that it could self-repair at temperatures as low as negative 4 degrees Fahrenheit (-20 C), or about as cold as a commercial walk-in freezer.

The team attributes the extreme stretching and self-healing ability of their new material to some critical improvements to a type of chemical bonding process known as crosslinking. This process, which involves connecting linear chains of linked molecules in a sort of fishnet pattern, has previously yielded a tenfold stretch in polymers.

First they designed special organic molecules to attach to the short polymer strands in their crosslink to create a series of structure called ligands. These ligands joined together to form longer polymer chains—spring-like coils with inherent stretchiness.

Then they added to the material metal ions, which have a chemical affinity for the ligands. When this combined material is strained, the knots loosen and allow the ligands to separate. But when relaxed, the affinity between the metal ions and the ligands pulls the fishnet taut. The result is a strong, stretchable and self-repairing elastomer.

“Basically the polymers become linked together like a big net through the metal ions and the ligands,” Bao explains. “Each metal ion binds to at least two ligands, so if one ligand breaks away on one side, the metal ion may still be connected to a ligand on the other side. And when the stress is released, the ion can readily reconnect with another ligand if it is close enough.”

The team found that they could tune the polymer to be stretchier or heal faster by varying the amount or type of metal ion included. The version that exceeded the measuring machine’s limits, for example, was created by decreasing the ratio of iron atoms to the polymers and organic molecules in the material.

The researchers also showed that this new polymer with the metal additives would twitch in response to an electric field. They have to do more work to increase the degree to which the material expands and contracts and control it more precisely. But this observation opens the door to promising applications.

In addition to its long-term potential for use as artificial muscle, this research dovetails with Bao’s efforts to create artificial skin that might be used to restore some sensory capabilities to people with prosthetic limbs. In previous studies her team has created flexible but fragile polymers, studded with pressure sensors to detect the difference between a handshake and a butterfly landing. This new, durable material could form part of the physical structure of a fully developed artificial skin.

“Artificial skin is not just made of one material,” says Franziska Lissel, a postdoctoral fellow in Bao’s lab and member of the research team. “We want to create a very complex system.”

Even before artificial muscle and artificial skin become practical, this work in the development of strong, flexible, electronically active polymers could spawn a new generation of wearable electronics, or medical implants that would last a long time without being repaired or replaced.

The Air Force Office of Scientific Research, Samsung Electronics, and the Major State Basic Research Development Program of China supported the work at Stanford. Other members of the research team are from University of California, Riverside and University of Colorado, Boulder.

Source: Republished from Futurity.org as a derivative work under the Attribution 4.0 International license. Original article published to Futurity by Tom Abate-Stanford.