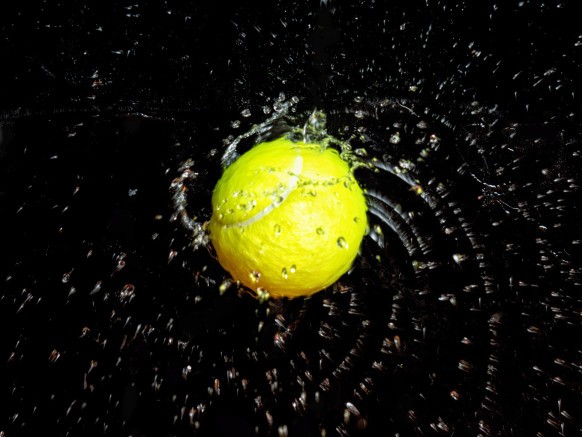 Spin wins tennis matches. Period. The ability to put spin on the ball and ace your opponent is key. But who figured that out first?  A fascinating article on Wired’s website delves into the details.

First of all, how does a player generate spin with their racquet?

In order to generate spin, you have to brush your racquet up across the ball, rather than strike it dead on. The motion looks kind of like you are giving the ball a weird high five. Starting low, with the racquet at your waist, you bring it up and forward, twisting with your hips and elbow so the racquet’s head finishes high above your opposite shoulder.

And that’s not all. “For a good topspin, you have to tilt the racquet at a good angle, too,” says Crawford Lindsey, head tester at the Tennis Warehouse University, a tennis testing website (with some seriouslyawesomestudies). “You don’t present much face to the ball, because everything is slanted.”

The best angle for your racquet’s forward face is around 50 degrees, or less, relative to the surface of the ground. This puts spin on the ball, but also makes it a lot easier to ding the ball with the rim. “Bigger racquets give you more surface area, and therefore safety, so you can swing faster and at a greater angle,” says Lindsey.

However, the technique can be greatly enhanced by the technology, so you may wonder: who thought about that first?  The article continues:

The modern, spin-dominated game of tennis owes everything to an inventor named Howard Head. In the late 1940s, Head was an airplane mechanic, and he was learning to ski. He liked the sport, but didn’t like lugging the heavy wooden planks up the hill between each run. His frustration became the first aluminum skis, which he patented and used to form the Head Ski Company.

What’s that got to do with tennis? A few decades later, Head sold his company, retired, and took up tennis. Like, he went all in: built a court at his house, hired a coach, bought a newfangled ball machine. But again, he found a sport that wasn’t quite designed right. First of all, his ball machine was wack. So he bought the company the made it—Prince—and invented a better version.

Then he went after the personal gear. Like with skiing, tennis was dominated by wood. But that medium restricted the racquets’ head area to about 60 square inches—the frame would break if it got any bigger. “There just wasn’t enough margin of error with a racquet that size,” says Rod Cross, a retired physicist in Australia who studies tennis physics. So Head brought his aluminum expertise to bear on the problem, and invented the sturdier aluminum Prince Classic. His patent covered tennis racquets with heads up to 125 square inches.

Howard Head’s big headed racquets let players attack the ball with more angle on their swings. (He later introduced graphite frames, which are even lighter and stronger.) But frame size is only part of the racquet design equation.

Read on, as we explore what else influences that critical equation…