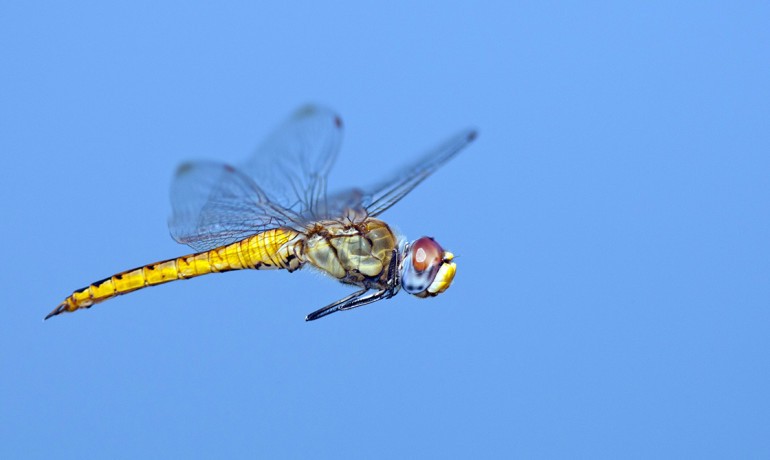 Through studying the genetics of these unique insects, biologists have discovered a dragonfly barely an inch and a half long which appears to have shattered the long-distance record for insect flight—traveling thousands of miles as it migrates from continent to continent.

Biologists say the evidence is in the genes. Populations of the dragonfly, called Pantala flavescens, in locations as far apart as Texas, eastern Canada, Japan, Korea, India, and South America, have genetic profiles so similar that there is only one likely explanation.

Apparently, somehow—the insects are traveling distances that are extraordinarily long for their small size, breeding with each other, and creating a common worldwide gene pool that would be impossible if they didn’t intermingle.

“This is the first time anyone has looked at genes to see how far these insects have traveled,” says Jessica Ware, an assistant professor of biology at Rutgers University and senior author of the study that is published in PLOS ONE.

So how do insects from different continents manage to meet and hook up? It appears to be the way their bodies have evolved, Ware says.

“These dragonflies have adaptations such as increased surface areas on their wings that enable them to use the wind to carry them. They stroke, stroke, stroke and then glide for long periods, expending minimal amounts of energy as they do so.”

Dragonflies have already been observed crossing the Indian Ocean from Asia to Africa. “They are following the weather,” says Daniel Troast, who analyzed the DNA samples in Ware’s lab while working toward his master’s degree in biology, which he earned at the university in 2015.

“They’re going from India where it’s dry season to Africa where it’s moist season, and apparently they do it once a year.”

Moisture is a must for Pantala to reproduce, and that, says Ware, is why these insects would be driven to even attempt such a perilous trip, which she calls a “kind of suicide mission.” The species depends on it. While many will die en route, as long as enough make it, the species survives.

Flight patterns appear to vary. The hardiest of the dragonflies might make the trip nonstop, catching robust air currents or even hurricane winds and gliding all the way.

Others may, literally, be puddle jumpers. Pantala need fresh water to mate and lay their eggs—and if while riding a weather current they spot a fresh water pool created by a rainstorm—even on an island in the middle of a vast ocean—it’s likely they will dive earthward and use those pools to mate.

After the eggs hatch and the babies are mature enough to fly—which takes just a few weeks—the new dragonflies join the swarm’s intercontinental and now multi-generational trek right where their parents left off.

For now, details of this extraordinary insect itinerary are an educated best guess, as are specific routes these migrations might take. Much more work is needed to bring many loose ends together.

But now that their work has established a worldwide population of intermingling dragonflies, the scientists hope work on plotting those routes in earnest. They would need to be innovative, because tracking devices that can be attached to larger animals are far too big to put on insects.

“Monarch butterflies migrating back and forth across North America were thought to be the longest migrating insects,” traveling about 2,500 miles each way, says Troast, “but Pantalacompletely destroys any migrating record they would have,” with its estimated range of 4,400 miles or more.

It even exceeds Charles Lindbergh’s celebrated solo flight from New York to Paris by at least several hundred miles. Pantala leaves many of its fellow dragonflies even farther behind. WhilePantala and its cousin the Green Darner (Anax junius) have developed into world travelers, other members of the family “don’t ever leave the pond on which they’re born–traveling barely 36 feet away their entire lives.”

The study is published in PLOS ONE.

Source: Republished from Futurity.org as a derivative work under the Attribution 4.0 International license. Original article posted to Futurity by Rob Forman-Rutgers.