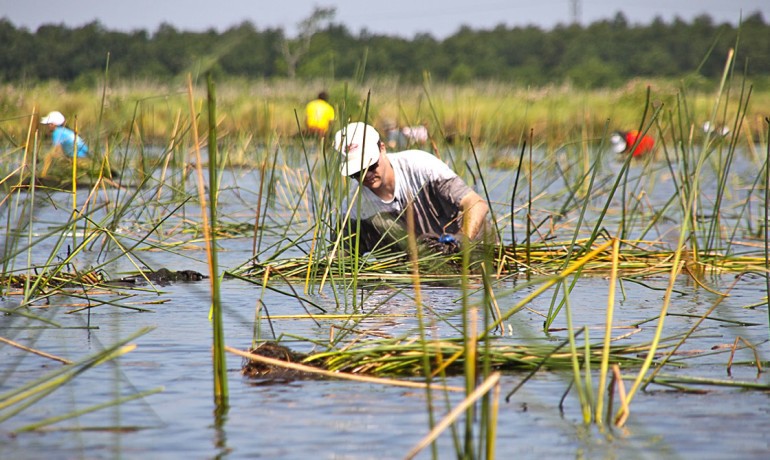 When restoring coastal wetlands, it’s long been common practice to leave space between new plants to prevent overcrowding and reduce competition for nutrients and sunlight.

It turns out that’s likely all wrong.

A new study, conducted to restore degraded salt marshes in Florida and the Netherlands, has found that clumping newly planted marsh grasses next to each other, with little or no space in between, can spur positive interactions between the plants and boost growth and survival by 107 percent, on average, by the end of one growing season.

In some test plots, plant density and vegetative cover increased by as much as 300 percent by season’s end.

“This is a really small design change that can yield greatly improved results, without adding to restoration costs or time,” says Brian R. Silliman, an associate professor of marine conservation biology at Duke University. “It’s essentially free success—higher yields at no added expense.”

Silliman and his colleagues published the new peer-reviewed research in the Proceedings of the National Academy of Sciences.

WE’VE BEEN DOING IT WRONG FOR DECADES

Their finding, which is applicable to a wide array of coastal restoration efforts worldwide, upends a 40-year-old theory borrowed from forestry that new plants—called outplants by restoration ecologists—need to be spaced well apart from each other to reduce competition and generate the highest growth rates.