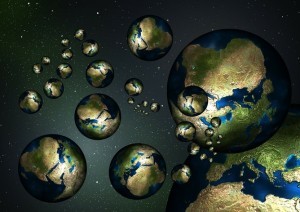 Eugene Lim, King’s College London
The existence of parallel universes may seem like something cooked up by science fiction writers, with little relevance to modern theoretical physics. But the idea that we live in a “multiverse” made up of an infinite number of parallel universes has long been considered a scientific possibility – although it is still a matter of vigorous debate among physicists. The race is now on to find a way to test the theory, including searching the sky for signs of collisions with other universes.

It is important to keep in mind that the multiverse view is not actually a theory, it is rather a consequence of our current understanding of theoretical physics. This distinction is crucial. We have not waved our hands and said: “Let there be a multiverse”. Instead the idea that the universe is perhaps one of infinitely many is derived from current theories like quantum mechanics and string theory.