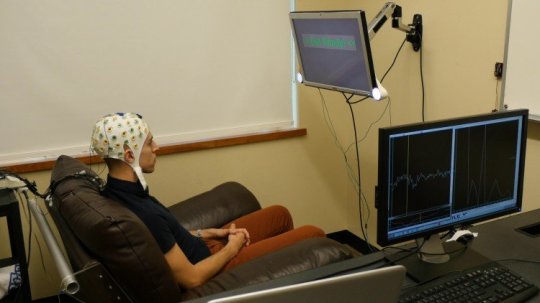 Researchers at the University of Washington in Seattle have discovered that they can connect two people’s brains over the internet using specially designed skull caps. Once connected, study participants played a question and answer game where the person responding had the correct answer 72% of the time.

A fantastic article on Science Daily’s website provides the details:

University of Washington researchers recently used a direct brain-to-brain connection to enable pairs of participants to play a question-and-answer game by transmitting signals from one brain to the other over the Internet. The experiment, detailed today in PLOS ONE, is thought to be the first to show that two brains can be directly linked to allow one person to accurately guess what’s on another person’s mind.

“This is the most complex brain-to-brain experiment, I think, that’s been done to date in humans,” said lead author Andrea Stocco, an assistant professor of psychology and a researcher at UW’s Institute for Learning & Brain Sciences.

“It uses conscious experiences through signals that are experienced visually, and it requires two people to collaborate,” Stocco said.

Here’s how it works: The first participant, or “respondent,” wears a cap connected to an electroencephalography (EEG) machine that records electrical brain activity. The respondent is shown an object (for example, a dog) on a computer screen, and the second participant, or “inquirer,” sees a list of possible objects and associated questions. With the click of a mouse, the inquirer sends a question and the respondent answers “yes” or “no” by focusing on one of two flashing LED lights attached to the monitor, which flash at different frequencies.

A “no” or “yes” answer both send a signal to the inquirer via the Internet and activate a magnetic coil positioned behind the inquirer’s head. But only a “yes” answer generates a response intense enough to stimulate the visual cortex and cause the inquirer to see a flash of light known as a “phosphene.” The phosphene — which might look like a blob, waves or a thin line — is created through a brief disruption in the visual field and tells the inquirer the answer is yes. Through answers to these simple yes or no questions, the inquirer identifies the correct item.

The experiment was carried out in dark rooms in two UW labs located almost a mile apart and involved five pairs of participants, who played 20 rounds of the question-and-answer game. Each game had eight objects and three questions that would solve the game if answered correctly. The sessions were a random mixture of 10 real games and 10 control games that were structured the same way.

But how did the researchers make sure that study participants weren’t gaming the system somehow? We answer that question on the next page…