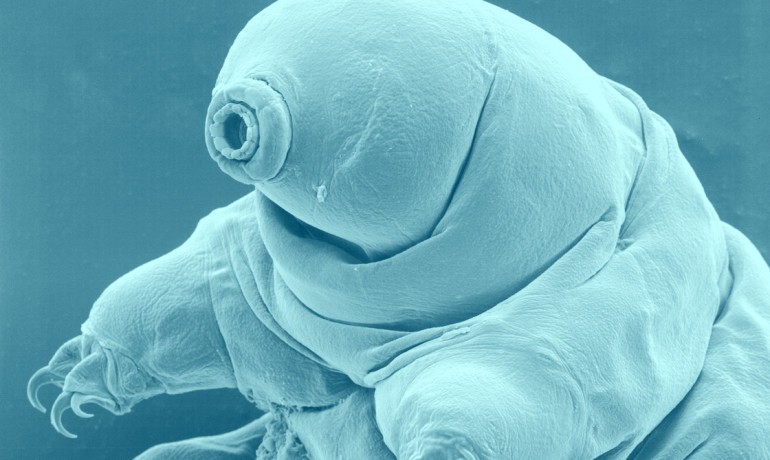 The tardigrade’s remarkable ability to withstand extreme environments of hot and cold, and even the vacuum of space inspired Juan de Pablo, professor in molecular engineering at the University of Chicago.

Specifically, he read about what happens when scientists dry out tardigrades, then revive them with water years later.

“When you remove the water, they very quickly coat themselves in large amounts of glassy molecules,” says de Pablo. “That’s how they stay in this state of suspended animation.”

The glass discovery appeared this spring in the Proceedings of the National Academy of Sciences. Now, a new paper in the Journal of Chemical Physics bolsters the earlier research, which found indications of molecular order in a material thought to be entirely amorphous and random.

“These are intriguing materials. They have the structure of a liquid, and yet they’re solids. They’re found everywhere, and we still do not understand how this process of turning from a liquid into a solid occurs,” says de Pablo.

Their results potentially offer a simple way to improve the efficiency of electronic devices such as light-emitting diodes, optical fibers, and solar cells. They also could have important theoretical implications for understanding the still surprisingly mysterious materials called glasses.

The molecular order that the researchers found came as a big surprise. “Randomness is almost the defining feature of glasses,” de Pablo says. “At least we used to think so.

“What we have done is to demonstrate that one can create glasses where there is some well-defined organization. And now that we understand the origin of such effects, we can try to control that organization by manipulating the way we prepare these glasses.”

Next, find out how they were able to mimic the tardigrade’s natural ability and produce similar new glass materials…