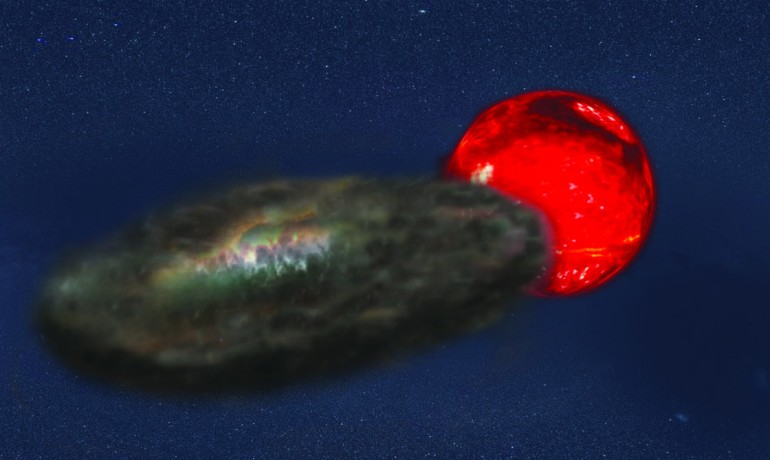 The newly discovered system, known only by its astronomical catalog number TYC 2505-672-1, sets a new record for both the longest duration stellar eclipse and the longest period between eclipses in a binary system.

“It’s the longest duration stellar eclipse and the longest orbit for an eclipsing binary ever found … by far,” says Joey Rodriguez, a doctoral student at Vanderbilt University and first author of the paper, which has been accepted for publication in the Astronomical Journal.

The previous record holder is Epsilon Aurigae, a giant star that is eclipsed by its companion every 27 years for periods ranging from 640 to 730 days.

“Epsilon Aurigae is much closer—about 2,200 light years from Earth—and brighter, which has allowed astronomers to study it extensively,” Rodriguez says. Epsilon Aurigae consists of a yellow giant star orbited by a normal star slightly bigger than the sun embedded in a thick disk of dust and gas oriented nearly edge on when viewed from Earth.

“One of the great challenges in astronomy is that some of the most important phenomena occur on astronomical timescales, yet astronomers are generally limited to much shorter human timescales,” says coauthor Keivan Stassun, professor of physics and astronomy. “Here we have a rare opportunity to study a phenomenon that plays out over many decades and provides a window into the types of environments around stars that could represent planetary building blocks at the very end of a star system’s life.”

Continue reading to learn how over 100 years of astronomical observations, including data from a relatively new telescope system made this serendipitous discovery possible.