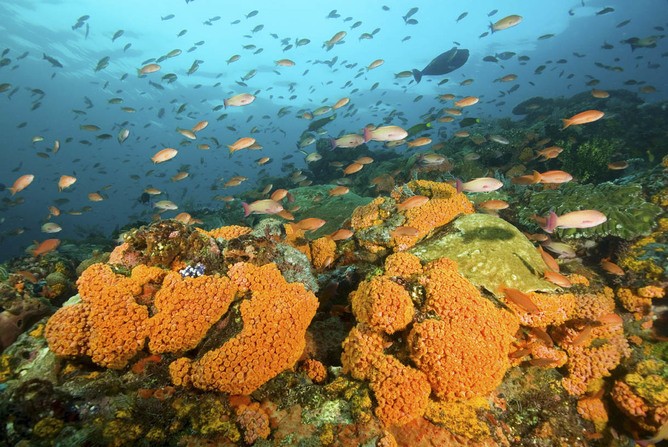 It was Charles Darwin, almost 200 years ago, who first asked how it could be that coral reefs could flourish in relatively barren parts of the Pacific Ocean. This conundrum subsequently became known as Darwin’s Paradox.

A study published this week in Nature Communications helps answer just how coral oases can exist in oceanic deserts.

The simple explanation is the presence of microscopic aquatic plants known as phytoplankton. The more complicated, scientific answer – that asks why coral islands are such productive hotspots – is known as the Island Mass Effect (IME).

The findings of the new study provide scientists who study marine fisheries and habitats with important insights into how coral reef island systems can be so productive, acting as hotspots of species diversity which, in turn, help populate fisheries and provide coastal protection. This knowledge can help inform ocean management plans, particularly as ecosystems respond to climate change.

The IME, first described by the University of Hawaii botanist Maxwell S. Doty and colleagues, is a phenomenon in which the growth of phytoplankton is enhanced close to island-reef ecosystems.

Until now, all studies trying to explain the reasons for the IME have been done over small, geographically confined areas, such as a single island or coral reef group.

This is where the Nature Communications paper’s lead author, Jamison Gove of the National Oceanic and Atmospheric Administration (NOAA), and his colleagues come in.