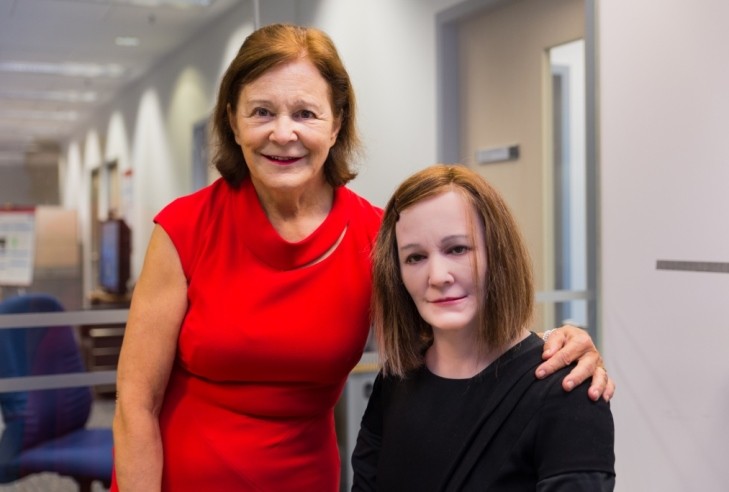 If you haven’t heard of Nanyang Technological University in Singapore, then it’s time to put them on your robotics research radar – a recent news release from NTU reveals some startlingly-incredible new robots that are amazingly human-like.

Two robots, with very different functions, were unveiled in their mind-bending press release:

Say hello to Nadine, a “receptionist” at Nanyang Technological University (NTU Singapore). She is friendly, and will greet you back. Next time you meet her, she will remember your name and your previous conversation with her.

She looks almost like a human being, with soft skin and flowing brunette hair. She smiles when greeting you, looks at you in the eye when talking, and can also shake hands with you. And she is a humanoid.

Unlike conventional robots, Nadine has her own personality, mood and emotions. She can be happy or sad, depending on the conversation. She also has a good memory, and can recognise the people she has met, and remembers what the person had said before.

Nadine is the latest social robot developed by scientists at NTU. The doppelganger of its creator, Prof Nadia Thalmann, Nadine is powered by intelligent software similar to Apple’s Siri or Microsoft’s Cortana. Nadine can be a personal assistant in offices and homes in future. And she can be used as social companions for the young and the elderly.

A humanoid like Nadine is just one of the interfaces where the technology can be applied. It can also be made virtual and appear on a TV or computer screen, and become a low-cost virtual social companion.

With further progress in robotics sparked by technological improvements in silicon chips, sensors and computation, physical social robots such as Nadine are poised to become more visible in offices and homes in future.

The rise of social robots

Prof Thalmann, the director of the Institute for Media Innovation who led the development of Nadine, said these social robots are among NTU’s many exciting new media innovations that companies can leverage for commercialisation.

“Robotics technologies have advanced significantly over the past few decades and are already being used in manufacturing and logistics. As countries worldwide face challenges of an aging population, social robots can be one solution to address the shrinking workforce, become personal companions for children and the elderly at home, and even serve as a platform for healthcare services in future,” explained Prof Thalmann, an expert in virtual humans and a faculty from NTU’s School of Computer Engineering.

“Over the past four years, our team at NTU have been fostering cross-disciplinary research in social robotics technologies – involving engineering, computer science, linguistics, psychology and other fields – to transform a virtual human, from within a computer, into a physical being that is able to observe and interact with other humans.

“This is somewhat like a real companion that is always with you and conscious of what is happening. So in future, these socially intelligent robots could be like C-3PO, the iconic golden droid from Star Wars, with knowledge of language and etiquette.”

Nadine’s robot-in-arms, EDGAR, was also put through its paces at NTU’s new media showcase, complete with a rear-projection screen for its face and two highly articulated arms.

EDGAR is a tele-presence robot optimised to project the gestures of its human user. By standing in front of a specialised webcam, a user can control EDGAR remotely from anywhere in the world. The user’s face and expressions will be displayed on the robot’s face in real time, while the robot mimics the person’s upper body movements.

EDGAR can also deliver speeches by autonomously acting out a script. With an integrated webcam, he automatically tracks the people he meets to engage them in conversation, giving them informative and witty replies to their questions.

Such social robots are ideal for use at public venues, such as tourist attractions and shopping centres, as they can offer practical information to visitors.

Led by Assoc Prof Gerald Seet from the School of Mechanical & Aerospace Engineering and the BeingThere Centre at NTU, this made-in-Singapore robot represents three years of research and development.

“EDGAR is a real demonstration of how telepresence and social robots can be used for business and education,” added Prof Seet. “Telepresence provides an additional dimension to mobility. The user may project his or her physical presence at one or more locations simultaneously, meaning that geography is no longer an obstacle.

“In future, a renowned educator giving lectures or classes to large groups of people in different locations at the same time could become commonplace. Or you could attend classes or business meetings all over the world using robot proxies, saving time and travel costs.”

Given that some companies have expressed interest in the robot technologies, the next step for these NTU scientists is to look at how they can partner with industry to bring them to the market.

Ready or not, here they come!