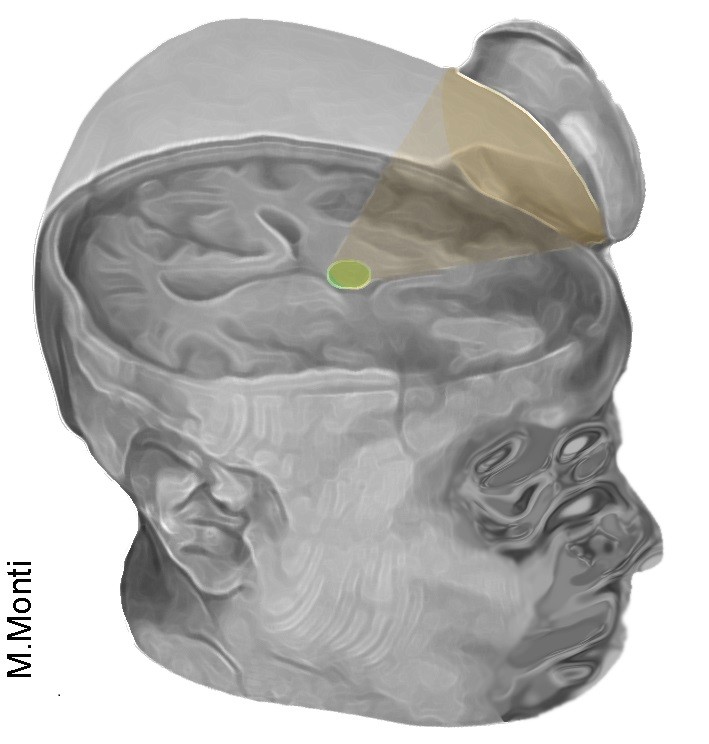 UCLA reports in a news release that a 25-year-old man recovering from a coma has made remarkable progress following a treatment at UCLA to jump-start his brain using ultrasound. The technique uses sonic stimulation to excite the neurons in the thalamus, an egg-shaped structure that serves as the brain’s central hub for processing information.

“It’s almost as if we were jump-starting the neurons back into function,” said Martin Monti, the study’s lead author and a UCLA associate professor of psychology and neurosurgery. “Until now, the only way to achieve this was a risky surgical procedure known as deep brain stimulation, in which electrodes are implanted directly inside the thalamus,” he said. “Our approach directly targets the thalamus but is noninvasive.”

Monti said the researchers expected the positive result, but he cautioned that the procedure requires further study on additional patients before they determine whether it could be used consistently to help other people recovering from comas.

“It is possible that we were just very lucky and happened to have stimulated the patient just as he was spontaneously recovering,” Monti said.

A report on the treatment is published in the journal Brain Stimulation. This is the first time the approach has been used to treat severe brain injury.

The technique, called low-intensity focused ultrasound pulsation, was pioneered by Alexander Bystritsky, a UCLA professor of psychiatry and biobehavioral sciences in theSemel Institute for Neuroscience and Human Behavior and a co-author of the study. Bystritsky is also a founder of Brainsonix, a Sherman Oaks, California-based company that provided the device the researchers used in the study.

That device, about the size of a coffee cup saucer, creates a small sphere of acoustic energy that can be aimed at different regions of the brain to excite brain tissue. For the new study, researchers placed it by the side of the man’s head and activated it 10 times for 30 seconds each, in a 10-minute period.

Monti said the device is safe because it emits only a small amount of energy — less than a conventional Doppler ultrasound.

Before the procedure began, the man showed only minimal signs of being conscious and of understanding speech — for example, he could perform small, limited movements when asked. By the day after the treatment, his responses had improved measurably. Three days later, the patient had regained full consciousness and full language comprehension, and he could reliably communicate by nodding his head “yes” or shaking his head “no.” He even made a fist-bump gesture to say goodbye to one of his doctors.

“The changes were remarkable,” Monti said.

The technique targets the thalamus because, in people whose mental function is deeply impaired after a coma, thalamus performance is typically diminished. And medications that are commonly prescribed to people who are coming out of a coma target the thalamus only indirectly.

Under the direction of Paul Vespa, a UCLA professor of neurology and neurosurgery at the David Geffen School of Medicine at UCLA, the researchers plan to test the procedure on several more people beginning this fall at the Ronald Reagan UCLA Medical Center. Those tests will be conducted in partnership with the UCLA Brain Injury Research Center and funded in part by the Dana Foundation and the Tiny Blue Dot Foundation.

If the technology helps other people recovering from coma, Monti said, it could eventually be used to build a portable device — perhaps incorporated into a helmet — as a low-cost way to help “wake up” patients, perhaps even those who are in a vegetative or minimally conscious state. Currently, there is almost no effective treatment for such patients, he said.