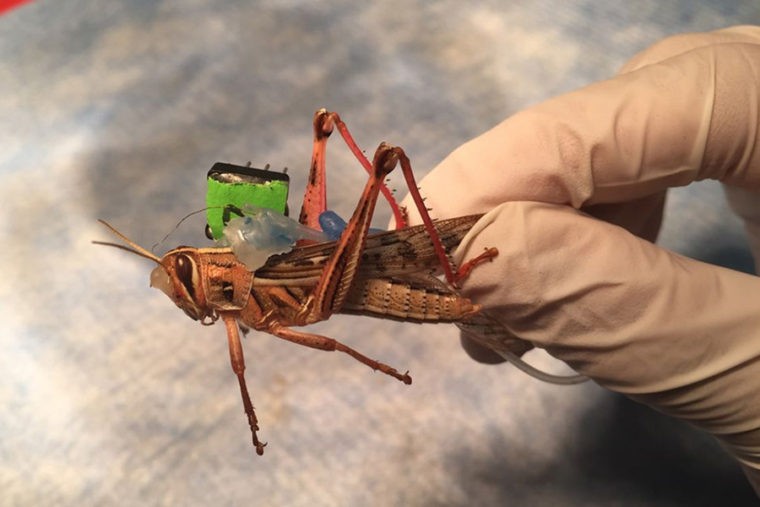 Engineers at Washington University in St. Louis are attaching sensors to locusts so they can monitor how the insects sniff out odors.

What they learn could be the basis for biorobotic sensing systems that detect dangerous chemicals or explosives.

“Why reinvent the wheel? Why not take advantage of the biological solution?”

Biological sensing systems are far more complex than their engineered counterparts, including the chemical sensing system responsible for our sense of smell, says Baranidharan Raman, associate professor of biomedical engineering at Washington University in St. Louis.

Raman has been studying how sensory signals are received and processed in relatively simple brains of locusts. He and his team have found that odors prompt dynamic neural activity in the brain that allow the locust to correctly identify a particular odor, even with other odors present.

In other research, his team also has found that locusts trained to recognize certain odors can do so even when the trained odor was presented in complex situations, such as overlapping with other scents or in different background conditions.

“Why reinvent the wheel? Why not take advantage of the biological solution?” Raman says. “That is the philosophy here. Even the state-of-the-art miniaturized chemical sensing devices have a handful of sensors. On the other hand, if you look at the insect antenna, where their chemical sensors are located, there are several hundreds of thousands of sensors and of a variety of types.”

Locust ‘Tattoos,’ or, How to Steer a Locust

The team intends to monitor neural activity from the insect brain while they are freely moving and exploring and decode the odorants present in their environment.

Such an approach will also require low power electronic components to collect, log and transmit data.

Shantanu Chakrabartty, professor of computer science and engineering, will collaborate with Raman to develop this component of the work.

The team also plans to use locusts as a biorobotic system to collect samples using remote control.

Srikanth Singamaneni, associate professor of materials science, will develop a plasmonic “tattoo” made of a biocompatible silk to apply to the locusts’ wings that will generate mild heat and help to steer locusts to move toward particular locations by remote control.

The tattoos, studded with plasmonic nanostructures, also can collect samples of volatile organic compounds in their proximity, which would allow the researchers to conduct secondary analysis of the chemical makeup of the compounds using more conventional methods.

“The canine olfactory system still remains the state-of-the-art sensing system for many engineering applications, including homeland security and medical diagnosis,” Raman says. “However, the difficulty and the time necessary to train and condition these animals, combined with lack of robust decoding procedures to extract the relevant chemical sending information from the biological systems, pose a significant challenge for wider application.

“We expect this work to develop and demonstrate a proof-of-concept, hybrid locust-based, chemical-sensing approach for explosive detection.”

Source: Republished from Futurity.org as a derivative work under the Attribution 4.0 International license. Original article posted to Futurity by  Beth Miller-WUSTL.