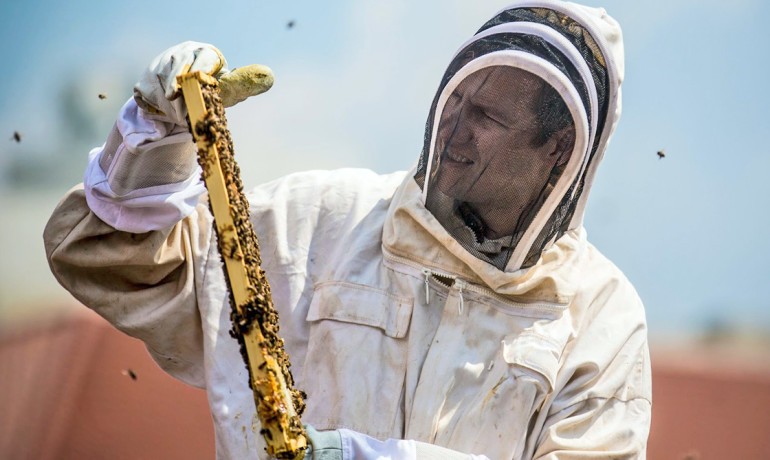 A growing number of pollinator species that are key to the world’s food supply are headed towards extinction, warns a new United Nations report—one of the first global assessments of pollinators.

“If pollinator declines continue at this rate it will have serious implications not just for human food security and economics but also for biodiversity and the health of ecosystems in general,” says Berry Brosi, assistant professor of environmental sciences at Emory University.

75% OF THE WORLD’S FOOD CROPS DEPEND ON POLLINATION BY AT LEAST ONE OF THE 20,000 SPECIES OF POLLINATORS.

Brosi, a biologist and ecologist whose research focuses on both managed honeybees and wild bees, was among 77 international experts who worked on the UN’s Intergovernmental Panel for Biodiversity Ecosystem Services (IPBES) pollinator assessment. They spent two years evaluating information from more than 3,000 scientific papers, as well as indigenous and local knowledge from more than 60 locations around the world.

“When we lose even one pollinator species from an ecosystem, it can degrade the functioning of the system overall,” Brosi says. “Studies have shown this relationship between biodiversity of pollinators and both agricultural productivity and plant reproduction in wild ecosystems.”

The report cites diverse pressures on pollinators, many of them human-made, including habitat loss, use of pesticides such as neonicotinoid insecticides, parasites and pathogens, and global warming.

“Pollinators are important to many of the foods that are key sources of the vitamins and minerals in our diets, such as fruits, vegetables, nuts, and seeds,” Brosi says. “Nutritionally, the pollinator declines will likely have the biggest impact on the poorest people of the world.”

Many crops also represent an important source of income in developing countries, such as coffee and cocoa. The report found that the annual total value of global crops directly affected by pollinators is between $235 billion and $577 billion.

“Pollinator decline is a multi-faceted issue with many drivers contributing to it,” Brosi says. “We can’t just fix one thing and have the problem go away.”

The report provides a portfolio of ways to reduce the risk to pollinators, including the promotion of sustainable agriculture, reducing pesticide use and maintaining patches of natural habitat amid agricultural fields.

“I hope this report will raise the visibility of this issue globally and help spur more efforts to reverse the trend of pollinator declines,” Brosi says. “We need a global-scale effort and coordination among different countries and regions.”

The global assessment follows several calls for action at a national level, including the National Strategy to Promote the Health of Honeybees and Other Pollinators launched last year by President Obama.

Source: Republished from Futurity.org as a derivative work under the Attribution 4.0 International license. Original article posted to Futurity by Carol Clark-Emory.