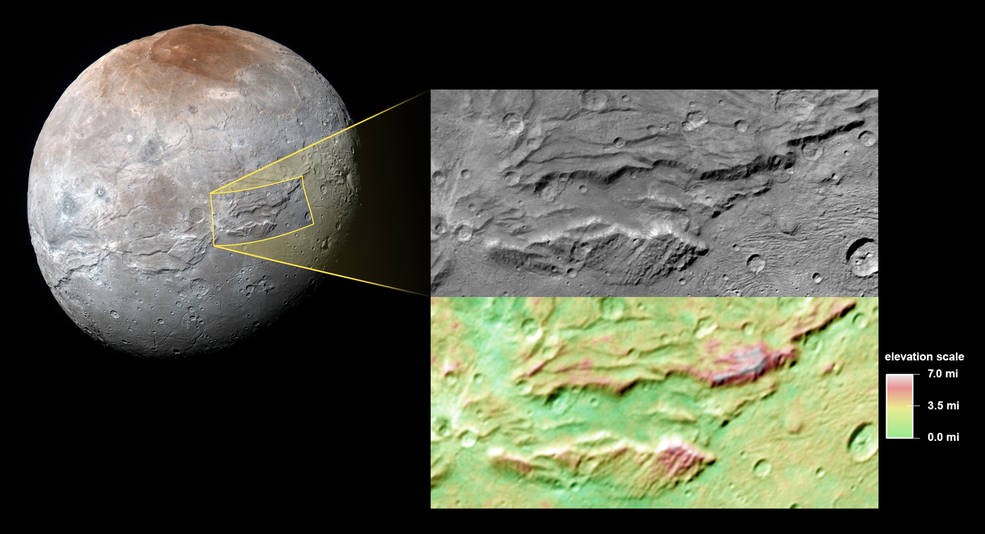 NASA scientists studying images of Pluto’s largest moon, Charon, from the New Horizons flyby data have discovered a fascinating feature of the surface of that moon: like the Incredible Hulk growing too big for his shirt, its surface is covered with “pull-apart” faults indicating that it has expanded and cracked.

A very interesting article on the NASA website provides the details of this fantastic situation:

Pluto’s largest moon may have gotten too big for its own skin.

Images from NASA’s New Horizons mission suggest that Pluto’s moon Charon once had a subsurface ocean that has long since frozen and expanded, pushing outward and causing the moon’s surface to stretch and fracture on a massive scale.

The side of Pluto’s largest moon viewed by NASA’s passing New Horizons spacecraft in July 2015 is characterized by a system of “pull apart” tectonic faults, which are expressed as ridges, scarps and valleys—the latter sometimes reaching more than 4 miles (6.5 kilometers) deep. Charon’s tectonic landscape shows that, somehow, the moon expanded in its past, and – like Bruce Banner tearing his shirt as he becomes the Incredible Hulk – Charon’s surface fractured as it stretched.

The outer layer of Charon is primarily water ice. This layer was kept warm when Charon was young by heat provided by the decay of radioactive elements, as well as Charon’s own internal heat of formation. Scientists say Charon could have been warm enough to cause the water ice to melt deep down, creating a subsurface ocean. But as Charon cooled over time, this ocean would have frozen and expanded (as happens when water freezes), lifting the outermost layers of the moon and producing the massive chasms we see today.

The lower portion of the image shows color-coded topography of the same scene. Measurements of the shape of this feature tell scientists that Charon’s water ice layer may have been at least partially liquid in its early history, and has since refrozen.

This image was obtained by the Long-Range Reconnaissance Imager (LORRI) on New Horizons. North is up; illumination is from the top-left of the image. The image resolution is about 1,290 feet (394 meters) per pixel. The image measures 240 miles (386 kilometers) long and 110 miles (175 kilometers) wide. It was obtained at a range of approximately 48,900 miles (78,700 kilometers) from Charon, about an hour and 40 minutes before New Horizons’ closest approach to Charon on July 14, 2015.

NASA scientists continue to be amazed by the geological features of both Pluto and Charon that have been revealed by the New Horizons mission, and since the data is still streaming back from the spacecraft, we can expect a lot more to come.