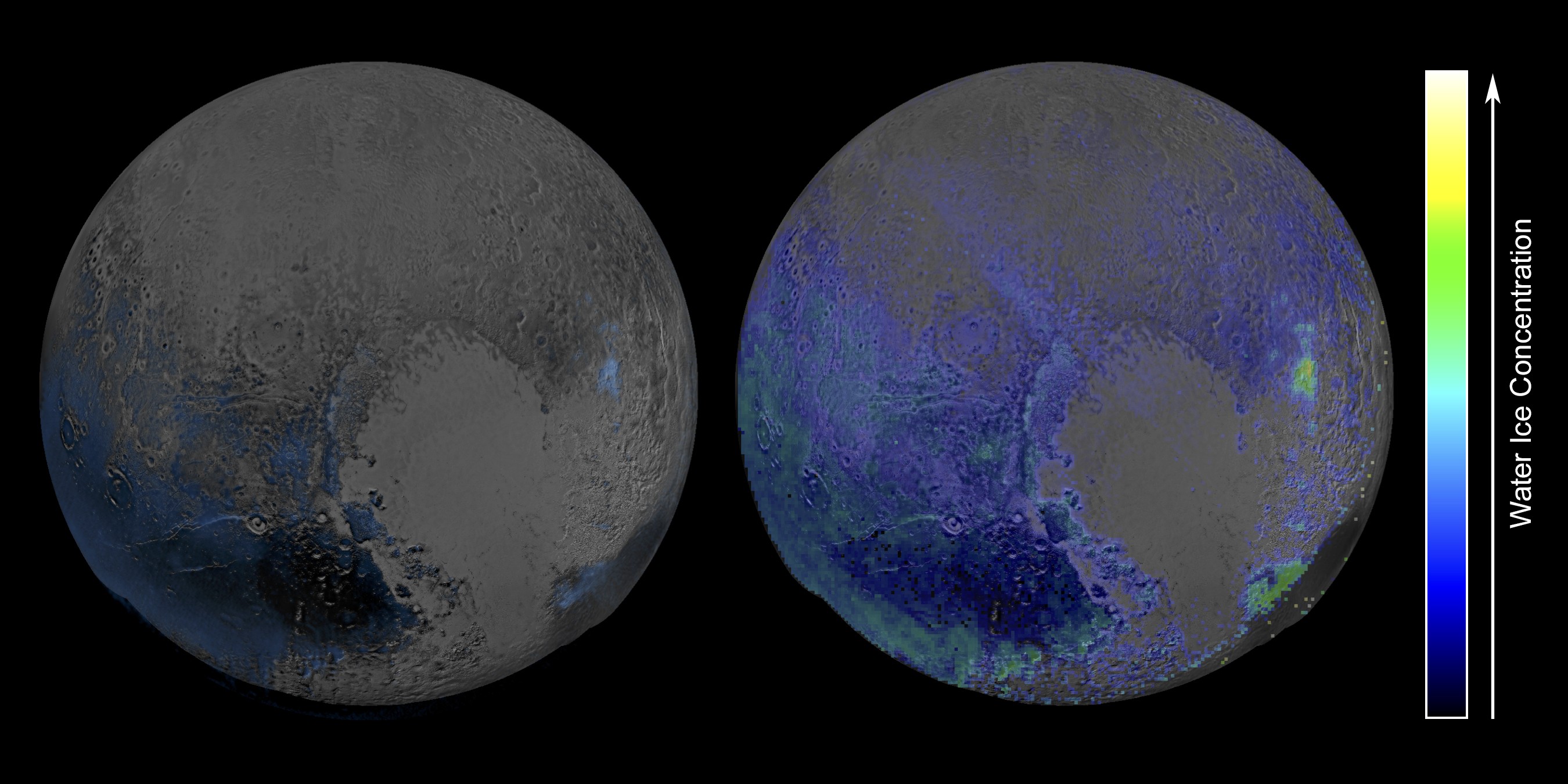 A new analysis in the infrared spectrum by New Horizons mission scientists has revealed that water-based ice is widespread on Pluto and, in fact, is the “crustal bedrock” of the dwarf planet, according to a recent article on the NASA website.

Researchers were very interested in reanalyzing the data because found that they needed to refine the initial analysis that of the spacecraft’s LEISA instrument data in order to gain a better understanding of the prevalence of water ice.

This false-color image [shown below], derived from observations in infrared light by the Ralph/Linear Etalon Imaging Spectral Array (LEISA) instrument, shows where the spectral features of water ice are abundant on Pluto’s surface. It is based on two LEISA scans of Pluto obtained on July 14, 2015, from a range of about 67,000 miles (108,000 kilometers).

The scans, taken about 15 minutes apart, were stitched into a combined multispectral Pluto “data cube” covering the full hemisphere visible to New Horizons as it flew past Pluto. A data cube like this is a three-dimensional array in which an image of Pluto is formed at each LEISA-sensitive wavelength.

A disadvantage of that technique is that water ice’s spectral signature is easily masked by methane ice, so that map was only sensitive to areas that were especially rich in water ice and/or depleted in methane. The much more sensitive method used on the right involves modeling the contributions of Pluto’s various ices all together. This method, too, has limitations in that it can only map ices included in the model, but the team is continually adding more data and improving the model.

The new map shows exposed water ice to be considerably more widespread across Pluto’s surface than was previously known — an important discovery. But despite its much greater sensitivity, the map still shows little or no water ice in the informally named places called Sputnik Planum (the left or western region of Pluto’s “heart”) and Lowell Regio (far north on the encounter hemisphere). This indicates that at least in these regions, Pluto’s icy bedrock is well hidden beneath a thick blanket of other ices such as methane, nitrogen and carbon monoxide.

This incredible discovery may mean that Pluto could someday be used as a water top-up stop for interstellar missions.