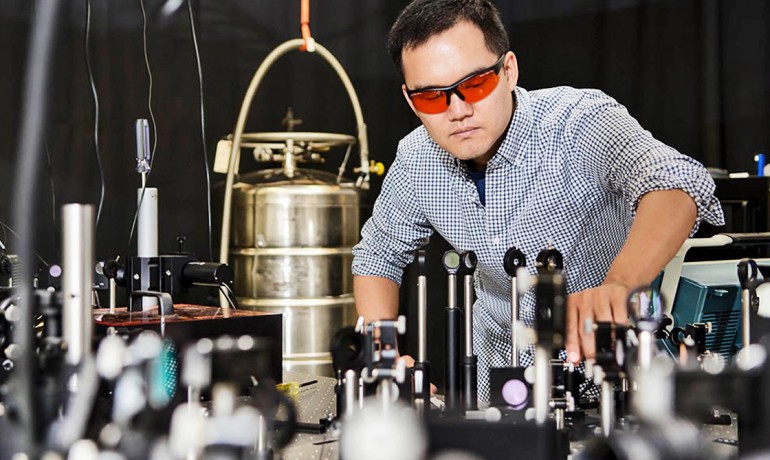 A team of physicists has discovered an unusual form of matter—not a conventional metal, insulator, or magnet, for example, but something entirely different.

This phase, characterized by an unusual ordering of electrons, offers possibilities for new electronic device functionalities and could hold the solution to a long-standing mystery in condensed matter physics having to do with high-temperature superconductivity—the ability for some materials to conduct electricity without resistance, even at “high” temperatures approaching –100 degrees Celsius.

“The discovery of this phase was completely unexpected and not based on any prior theoretical prediction,” says David Hsieh, an assistant professor of physics at California Institute of Technology (Caltech), who previously was on a team that discovered another form of matter called a topological insulator.

“The whole field of electronic materials is driven by the discovery of new phases, which provide the playgrounds in which to search for new macroscopic physical properties.”

Hsieh and his colleagues describe their findings in Nature Physics. Liuyan Zhao, a postdoctoral scholar in Hsieh’s group, is lead author.

PICTURE ELECTRONS IN A CRYSTAL

The physicists made the discovery while testing a laser-based measurement technique that they recently developed to look for what is called multipolar order. To understand multipolar order, first consider a crystal with electrons moving around throughout its interior. Under certain conditions, it can be energetically favorable for these electrical charges to pile up in a regular, repeating fashion inside the crystal, forming what is called a charge-ordered phase. The building block of this type of order, namely charge, is simply a scalar quantity—that is, it can be described by just a numerical value, or magnitude.

In addition to charge, electrons also have a degree of freedom known as spin. When spins line up parallel to each other (in a crystal, for example), they form a ferromagnet—the type of magnet you might use on your refrigerator and that is used in the strip on your credit card. Because spin has both a magnitude and a direction, a spin-ordered phase is described by a vector.

Over the last several decades, physicists have developed sophisticated techniques to look for both of these types of phases. But what if the electrons in a material are not ordered in one of those ways? In other words, what if the order were described not by a scalar or vector but by something with more dimensionality, like a matrix?

This could happen, for example, if the building block of the ordered phase was a pair of oppositely pointing spins—one pointing north and one pointing south—described by what is known as a magnetic quadrupole. Such examples of multipolar-ordered phases of matter are difficult to detect using traditional experimental probes.

As it turns out, the new phase that the Hsieh group identified is precisely this type of multipolar order, they just had to figure out how to detect it. Find out how they approached that puzzle on the next page…