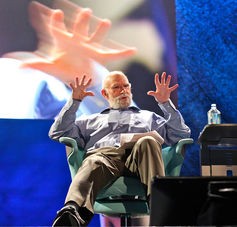 Oliver Sacks, the celebrated neurologic storyteller who died at the end of August at age 82, once described himself as “strongly atheist by disposition.”

Sacks could write sensitively about religion, including a recent article on the role of the Sabbath in his own life, but in writing about mystical experiences, he typically repaired to his professional lexicon, referring to them as hallucinations – seemingly authentic visual and auditory experiences traceable not to any external reality, but only to the brain itself. Sacks had witnessed in many of his patients the depths of human longing, including a deep hunger for God, but to him they revealed truths only about our own psyches.

The notion that God represents but a chimera, a projection of inner human needs, goes back at least to the 19th-century philosopher Ludwig Feuerbach, who wrote that our longing for God reveals nothing more than a desire to make gods of ourselves.

More recently, some philosophers and scientists have suggested that belief in God is nothing more than a delusion that springs from our need to discern patterns and even intentions in otherwise purposeless events taking place around us. Belief in God, they say, offers a refuge from the world’s cold incomprehensibility.