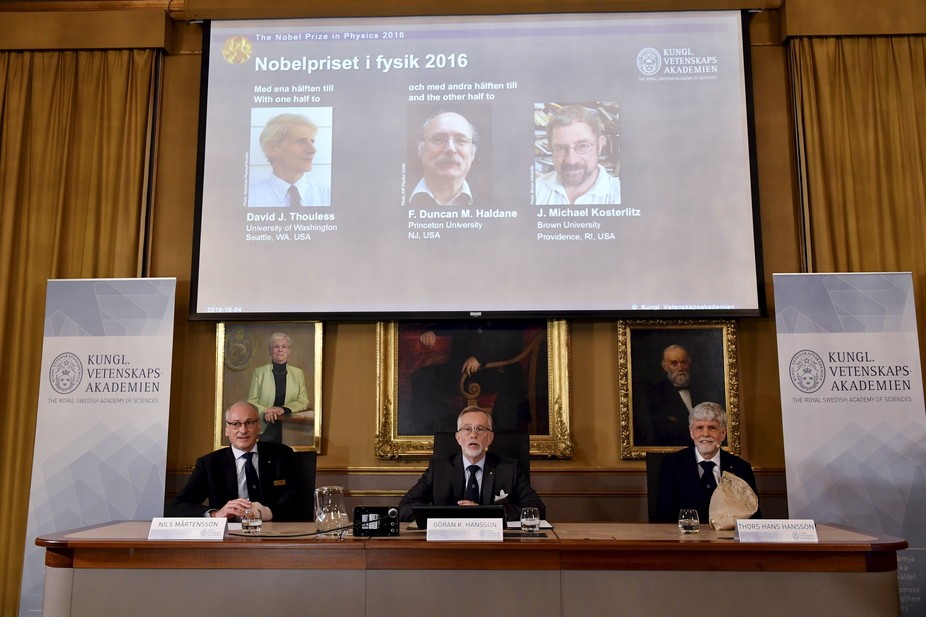 By Stephen Clark, University of Bath.

The Nobel Prize in Physics for 2016 has been awarded to three British scientists working in the US for their theoretical work explaining strange states of matter, including superconductors, superfluids and thin magnetic films.

The prize was split between David J Thouless of the University of Washington, Duncan M Haldane of Princeton and J Michael Kosterlitz of Brown University. They will share a sum of US$928,000. Their work has helped shape an enormous amount of research over the past three decades and this well-deserved prize reflects the continuing importance of new discoveries that have and will continue to emerge from it.

“Normal” states of matter are ones you’re likely familiar with: solids, liquids and gases. The transition between these states is characterised by what is referred to as “symmetry breaking”.

For example, in a liquid, atoms are arranged uniformly in space and it looks identical no matter how you rotate it. However, when a liquid turns into a solid the atoms are locked into a crystal lattice. This new state of matter is less symmetrical in the sense that it only looks the same if it is rotated at certain angles. However, Thouless, Haldane and Kosterlitz found that matter is a lot more interesting than this. Their work showed how new phases of matter can occur where no symmetry is broken – and they used a mathematical idea to explain this. What distinguished these phases of matter – which display strange behaviour such as unusual patterns of electrical conductivity – were “topological properties”.

Topology is the mathematical study of how surfaces can be deformed continuously and smoothly. A famous example is the surface of an orange, a croissant, a coffee cup and a doughnut. To a mathematician, all these objects are imagined to be made of a malleable material that we are allowed to deform continuously without cutting or tearing. In this way an orange and croissant are identical, since we could mould both of them into a sphere. Likewise the coffee cup and doughnut are also the same to a mathematician because they both have one hole – the cup has a hole in its handle and the doughnut at its centre.

So, in this abstract sense the orange and croissant are in one distinct class, while the coffee cup and doughnut are in another. The difference between them boils down to whether their surface has a hole in it or not. This is the topological property of the object that is robust to any form of moulding we might do. The work of Thouless, Kosterlitz and Haldane made important steps in understanding how the notion of topology plays a role in the phases of matter.

This connection was exposed by considering the energies that electrons in materials can occupy – which can be plotted as a surface (when presented as a function of their momentum). In the 1980s scientists discovered that electrons in certain two-dimensional thin films move in a strange way when subjected to a strong magnetic field. These electrons order into perfectly conducting channels, located at the edge of the material, based on a quantum mechanical property known as spin.

What’s more, this conductivity increases in discrete steps as the magnetic field increases – an effect called the quantum Hall effect. Thouless and coworkers found that the “energy surface” for these materials could be described as a doughnut in topological terms, and the channels of energy that were seen were effectively the number of holes in that surface. Along with further work by Kosterlitz and Haldane on other systems, like vortices superconductors and hidden ordering in magnetic materials, their work demonstrated that the idea of topology could be used to predict the behaviour of solids.

Thouless, Kosterlitz and Haldane’s work has laid the foundations for new emerging fields. In particular they have been crucial to an area of solid state physics called topological insulator materials. These are new three-dimensional materials that carry electricity on the surface but not in their interior. Their energy surface can also be described by topology. These materials have many “spintronic applications”, and heads of hard drives based on this technology are currently used in industry.

Technological applications of materials often rely on how they behave when they are “excited” as a result of some energy transfer. We can imagine an excitation as being a bit like a pulse travelling down a string if we shake it at one end.

One device that is currently being studied is made of topological insulator layered on top of a superconductor (a material with zero electrical resistance at low temperatures). If we poke this system in the right way then it is excited at the interface between the materials. These excitations carry a topological property, like a hole in a doughnut, which is robust to noise and imperfections that might scatter the excitation (which could be some sort of signal).

This effect is potentially very useful for quantum computing. The “bits” of data in a normal computer are 1 or 0. However a quantum computer uses quantum bits, which can be in superpositions of states (according to quantum mechanics) – making calculations super fast. Currently scaling quantum computing up to commercially applicable sizes is hampered by noise from the external environment, such as something shaking. However, by exploiting excitations of topological materials, the information encoded in them could be protected and preserved.

This is an exciting avenue of research that could help revolutionise information processing technologies.