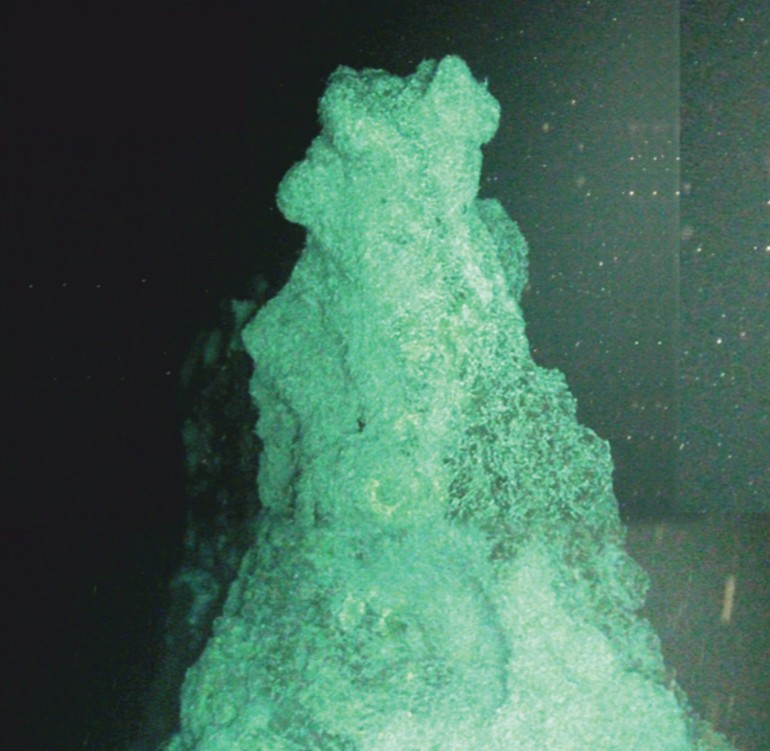 Normally, deep ocean hydrothermal vents are made of sulphide minerals, but in strange twist, oceanic researchers from the University of Southampton have found vents in the Caribbean that are unlike anything that has been discovered before. These vents are made of talc.

Researchers analyzed samples from active vents in the Von Damm Vent Field (VDVF), a vent field south of the Cayman Islands discovered by scientists and crew on board the RRS James Cook in 2010. Their findings appear in the journal Nature Communications.

“This vent site is home to a community of fauna similar to those found at the Mid-Atlantic Ridge in the Atlantic Ocean, but the minerals and chemistry at the Von Damm site are very different to any other known vents,” says Matthew Hodgkinson, a postgraduate research student at the National Oceanography Centre Southampton at the University of Southampton.

“The discovery of this new class of vent system serves to demonstrate our limited understanding of the ocean floor and the importance of and role for ‘discovery science’ in the oceans,” says Steve Roberts, professor of geology.

Hydrothermal vents form in areas where the Earth’s tectonic plates are spreading. At these sites, circulating seawater is heated by magma below the seafloor and becomes more acidic—leaching metals from the surrounding rocks and redepositing them as the hot water spews out of vents or ‘chimneys’ at the seabed and hits the cold seawater.

The Von Damm Vent Field system, however, is highly unusual compared to the typical hydrothermal vent that scientists are familiar with, besides the fact that they are made of talc. Continue to the next page to see what else has surprised the researchers about these vents…