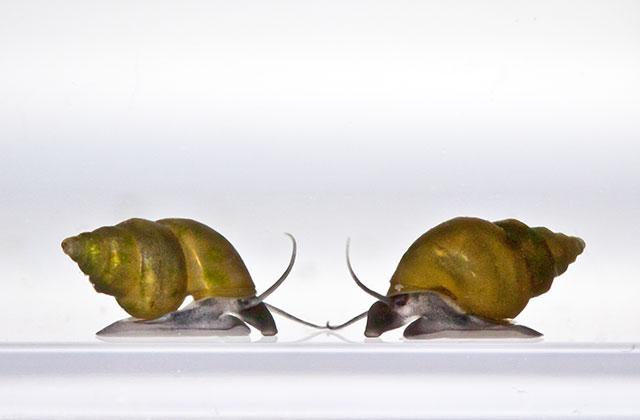 A team lead by biologist Maurine Neiman of the University of Iowa had published a study in early 2016 indicating that a New Zealand snail seemingly made a case for sex being almost pointless.  This same team has now found that there indeed may be a very good point for sexual vs. asexual reproduction in this snail species (Potamopyrgus antipodarum), indicating that male-female mating—factored over generations—helps creatures keep pace with an ever-changing world and fend off threats, which may perhaps broadly be applicable to all species.

In this new study, researchers documented the concentration of sexual females and asexual females at multiple sites in the same lake and compared how their populations were affected by a parasitic worm commonly associated with the snails.

In areas of the lake where the worm was prevalent, male snails were plentiful (indicating sexually reproducing female snails were present). The researchers also found male snails roaming in areas where the parasite concentration was as low as four percent, as well as in higher numbers where parasite activity was heavier.

The results offer another encouraging sign that sexually produced offspring are getting a genetic boost from mommy and daddy. For instance, the offspring get two genetic blueprints (one from each parent), rather than just their mother’s genome, which they would if they were born to an asexual female.

Viewed over generations, sexual reproduction can produce new gene combinations that are needed to deal with changing environments.

“These results are consistent with the idea that there are advantages to sex related to the ability to produce diverse offspring,” says Maurine Neiman, associate professor in biology at the University of Iowa and corresponding author on the paper published in the New Zealand Journal of Ecology. “Snails born with rare gene combinations would be harder to infect because the parasites have rarely, if ever, encountered those shuffled genetic combinations.”

Neiman and others in her field have been studying the freshwater snails for years, in large part because some females can bear offspring without males. The snails also are vulnerable to a well-documented threat—a parasitic worm (Microphallus livelyi) that lives within the snail as it awaits a chance to glom on to its final host: ducks that eat infected snails.

This study adds to other analyses linking parasite activity to sexual and asexual female populations within a small mountain lake, Lake Grasmere. This study is distinctive because the researchers found dramatic differences in the percentage of female sexual and asexual snails (using males’ presence as a proxy) and parasite prevalence between sites as close as two football fields apart, “suggesting that these evolutionary links between sex and parasites can operate at a remarkably small scale,” Neiman says.

Neiman and her colleagues think the parasitic worm invades the snail by tricking its immune system into believing it’s not a threat. Some diseases do the same with humans, fooling our immune system just enough to lodge themselves within our bodies and make us ill. Yet, over time, humans have inherited and passed down new gene combinations that protect better against those diseases. That’s genetic diversity and natural selection at work.

Like humans, the snails’ best defense against the parasitic worm is to pass down gene combinations that are new to the parasite. That shuffling of genes is much more likely to occur through male-female mating than asexual reproduction, where the daughter inherits her mother’s exact genetic makeup.

The team visited Lake Grasmere in January 2014. There, 25 undergraduates from Carleton College, in Minnesota, assisted Neiman and the paper’s first author, Carleton College biologist Mark McKone, by collecting 1,800 snails at 18 sites, either on foot or by kayak, and examining each under a microscope to catalog sex and infection rates. Carleton College funded the study, which is published in the New Zealand Journal of Ecology.

Source: Republished from Futurity.org as a derivative work under the Attribution 4.0 International license. Original article posted to Futurity by Richard Lewis-Iowa.