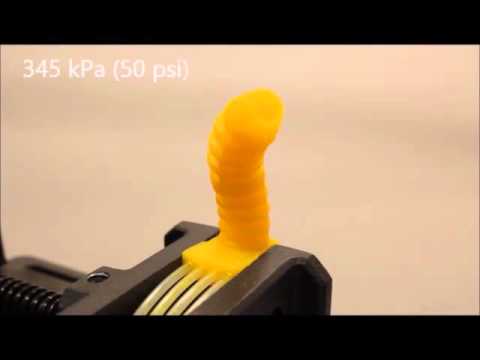 Scientists have created a new lightweight and stretchable polymer foam and used it to make a pump that mimics both the shape and function of a human heart.

The foam is unique because it can be formed and has connected pores that allow fluids to be pumped through it. Scientists say it has the potential for use in other artificial organs as well as prosthetic body parts and soft robotics.

The polymer foam starts as a liquid that can be poured into a mold to create shapes. Because of the pathways for fluids, when air or liquid is pumped through it, the material moves and can change its length by 300 percent.

While applications for use inside the body require federal approval and testing, researchers say they’re close to making prosthetic body parts with the so-called “elastomer foam.”

“We are currently pretty far along for making a prosthetic hand this way,” says Rob Shepherd, assistant professor of mechanical and aerospace engineering at Cornell University.

The porous channels are made by mixing salt with the rubbery elastomer when it’s still a liquid. Once the elastomer cures and hardens, the salt is removed. To seal an organ or prosthetic so air or fluid can be pumped through it without escaping, researchers coated the outside with the same polymer but without the salt.

In the paper, published in the journal Advanced Materials, researchers explained how they used carbon fiber and silicone on the outside to fashion a structure that expands at different rates on the surface—to make a spherical shape into an egg shape, for example, that would hold its form when inflated.

“This paper was about exploring the effect of porosity on the actuator, but now we would like to make the foam actuators faster and with higher strength, so we can apply more force,” Shepherd says. “We are also focusing on biocompatibility.”

In a separate study published last month, Shepherd and colleagues developed an elastomer with a 3D printer to create layers and duplicate muscles of an octopus tentacle (see video above), with comparable agility and freedom of movement as a real tentacle. The research was groundbreaking since until now 3D printing methods could not directly print a device with as much agility and degree of freedom as the new method provides, Shepherd says.

The research was funded by the Air Force Office of Scientific Research, 3M, and the National Science Foundation.

Source: This article was reproduced from Futurity.org under the Attribution 4.0 International license with a new title and additional article links and one image omitted.