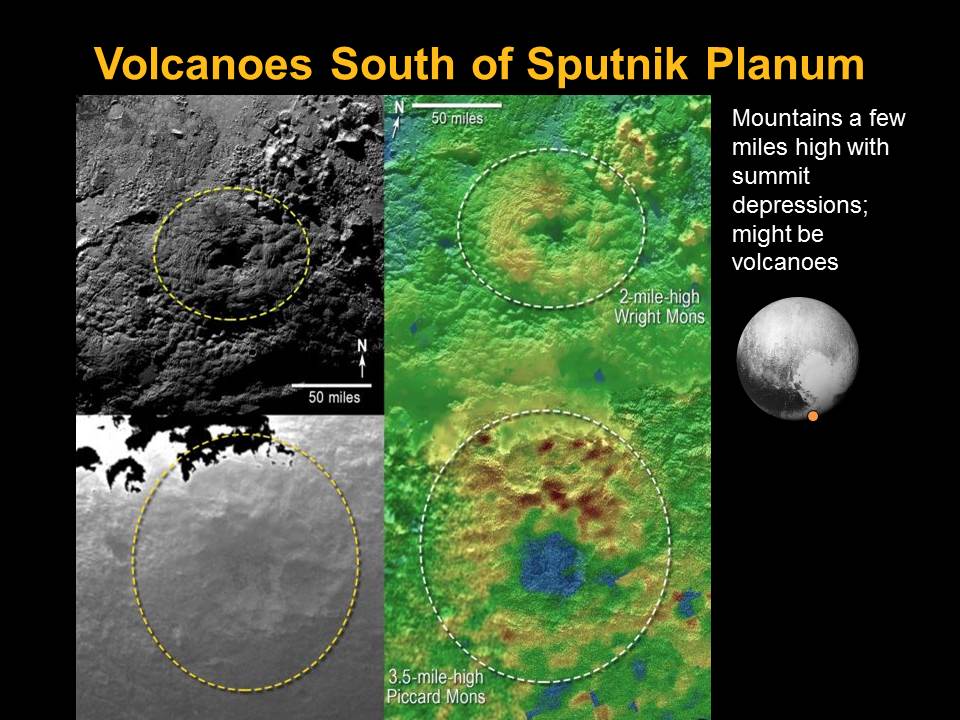 The New Horizons flyby of Pluto has yielded a jackpot of amazing discoveries about the icy world, and at the  47th Annual Meeting of the American Astronomical Society’s Division for Planetary Sciences, NASA scientists revealed the latest jaw dropper: possible ice volcanoes.

“The New Horizons mission has taken what we thought we knew about Pluto and turned it upside down,” said Jim Green, director of planetary science at NASA Headquarters in Washington. “It’s why we explore — to satisfy our innate curiosity and answer deeper questions about how we got here and what lies beyond the next horizon.”

For one such discovery, New Horizons geologists combined images of Pluto’s surface to make 3-D maps that indicate two of Pluto’s most distinctive mountains could be cryovolcanoes — ice volcanoes that may have been active in the recent geological past.

“It’s hard to imagine how rapidly our view of Pluto and its moons are evolving as new data stream in each week. As the discoveries pour in from those data, Pluto is becoming a star of the solar system,” said mission Principal Investigator Alan Stern of the Southwest Research Institute in Boulder, Colorado. “Moreover, I’d wager that for most planetary scientists, any one or two of our latest major findings on one world would be considered astounding. To have them all is simply incredible.”

“These are big mountains with a large hole in their summit, and on Earth that generally means one thing — a volcano,” said Oliver White, New Horizons postdoctoral researcher at NASA’s Ames Research Center in Moffett Field, California. “If they are volcanic, then the summit depression would likely have formed via collapse as material is erupted from underneath. The strange hummocky texture of the mountain flanks may represent volcanic flows of some sort that have traveled down from the summit region and onto the plains beyond, but why they are hummocky, and what they are made of, we don’t yet know.”

While their appearance is similar to volcanoes on Earth that spew molten rock, ice volcanoes on Pluto are expected to emit a somewhat melted slurry of substances such as water ice, nitrogen, ammonia, or methane. If Pluto proves to have volcanoes, it will provide an important new clue to its geologic and atmospheric evolution.

“After all, nothing like this has been seen in the deep outer solar system,” said Jeffrey Moore, New Horizons Geology, Geophysics and Imaging team leader, at Ames.