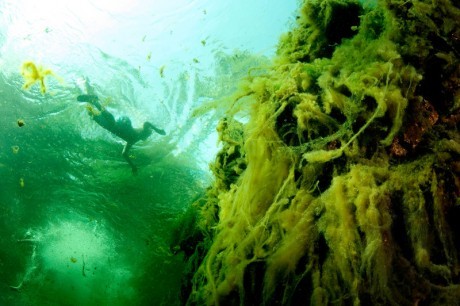 Florida’s freshwater springs with extensive underwater caves have long been a coveted destination for divers, but over the past 25 years, many of the springs have been invaded by slimy algae. Discover’s website has a really interesting article that reports on the changes that have occurred:

Twenty-five years ago, the striking blue waters of Florida’s Peacock Springs were as clear as glass, “like a fantasy,” recalls environmental scientist and cave diver Pete Butt. Snorkeling at the surface, he could see through the water to the limestone bottom and its craggy portals to one of the longest underwater cave systems in the nation.

Divers still converge on Peacock and the other springs that sparkle azure in the forests of northern and central Florida. Yet outbreaks of algae have started to cloud the crystal waters — along with the future of Florida’s collection of more than 1,000 freshwater springs, one of the world’s largest concentrations.

Algae clump on the surface in smelly mats, smother native aquatic vegetation with slime or grow along the bottom in hairy, green strands. “Amorphous goo,” Butt calls it. “Atrocious.”

While scientific conventional wisdom has tied such algae growths to increased nitrate pollution from farming runoff and other sources, as well as pumping of ground water for drinking water, it turns out that the picture may be a lot more complex than that.  On the next page, we explore why that is…