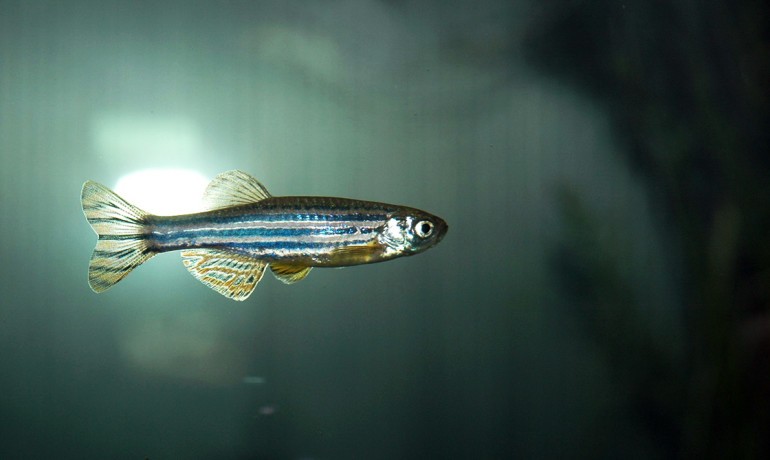 The first large-scale screening in a vertebrate animal for genes that regulate sleep has identified a gene that causes severe insomnia when it’s overactivated.

Expression of the gene, called neuromedin U (Nmu), also seems to serve as nature’s stimulant—zebrafish lacking the gene take longer to wake up in the morning and are less active during the day.

The findings, published in the journal Neuron, improve understanding of how sleep is regulated—a process that we know surprisingly little about despite its clear importance, researchers say. In the long term, the results suggest Nmu as a potential candidate for new therapies to address sleep disorders.

“Sleep is a mysterious process,” says David Prober, assistant professor of biology at California Institute of Technology. “We spend a third of our lives doing it, and every animal with a complex nervous system seems to do it, so it must be important. But we still don’t understand why we do it or how it’s regulated.”

Genetic screens are a powerful method that can help identify the genetic basis of such behaviors. They typically involve mutating the DNA of thousands of animals, raising them, identifying any resulting physical or behavioral differences, and determining which altered gene produced each mutation. This approach works well for simple model organisms, such as fruit flies and worms, because their anatomy is relatively simple and it is easy to raise large numbers of them, but is far more difficult in vertebrates, such as rodents.

Recently, zebrafish have emerged as a valuable vertebrate model system for studying sleep. Compared to a mouse, the small, striped fish are much easier to work with. Many can be raised in a small space (a larva is about 4 millimeters long, about the same size as a fruit fly); they develop quickly, exhibiting complex behaviors, such as hunting, by the time they are five days old; and they are transparent during their embryonic and larval stages, making it simpler for researchers to track what is happening inside their brains.

Like humans, zebrafish sleep for consolidated periods of time at night. Furthermore, “anatomical and molecular similarities between zebrafish and mammalian brains suggest that the basic neural circuits regulating sleep in zebrafish are likely conserved in mammals.” Prober says.

Read on to learn the fascinating details of this research.