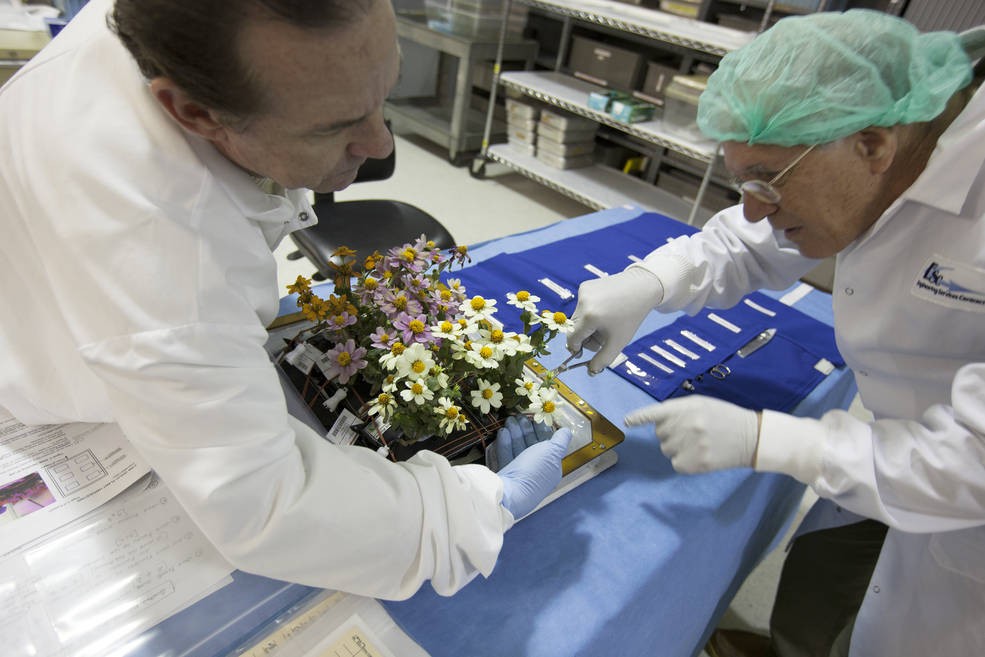 Zinnia plants from the Veggie ground control experiment at NASA’s Kennedy Space Center in Florida were harvested Feb. 11 in the same way that crew member Scott Kelly also harvested the zinnias growing in the Veggie system aboard the International Space Station on Feb. 14—Valentine’s Day. Flowering plants will help scientists learn more about growing crops for deep-space missions and NASA’s journey to Mars.

The ground plants didn’t experience some of the same stressors as those grown simultaneously on the ISS — like unexpected fungus growth. However, some of the zinnia plants aboard the floating laboratory pulled through due to collaboration between the astronauts and the ground team at Kennedy. Ultimately, the experiment that went off-script when astronaut Scott Kelly became an autonomous gardener, provided researchers with even more information about how to effectively grow plants in space than they expected.

“I think we’ve learned a lot about doing this kind of experiment. We’re being farmers in space,” Kelly said. “I was extra motivated to bring the plants back to life.”

Researchers hope to gather good data regarding long-duration seed stow and germination. Also, whether pollen could affect crew health and how having growing colorful flowering plants to grow could improve crew morale

Veggie is the biggest plant/flower experiment to fly on the station. Experiments involving space plants have been a favorite of astronauts, especially those staying in space for long durations like Scott Kelly. According to behavioral health scientists, part of the pleasure for astronauts is just being involved in meaningful work. But crews in space aren’t the only ones positively affected by growing plants.

“We are sad to see them go,” said Chuck Spern, a project engineer with Vencore on the Engineering Services Contract at Kennedy, “We’ve been caring for them for quite a while. But it’s for the interest of science so we can go to Mars.”

At Kennedy, Spern removed the Veggie base tray from a controlled environment chamber in the Space Station Processing Facility, and moved it to the Flight Equipment Development Laboratory for harvesting.

Continue reading to learn the details about the experiment and why it will help with understanding crop production on future deep-space missions.