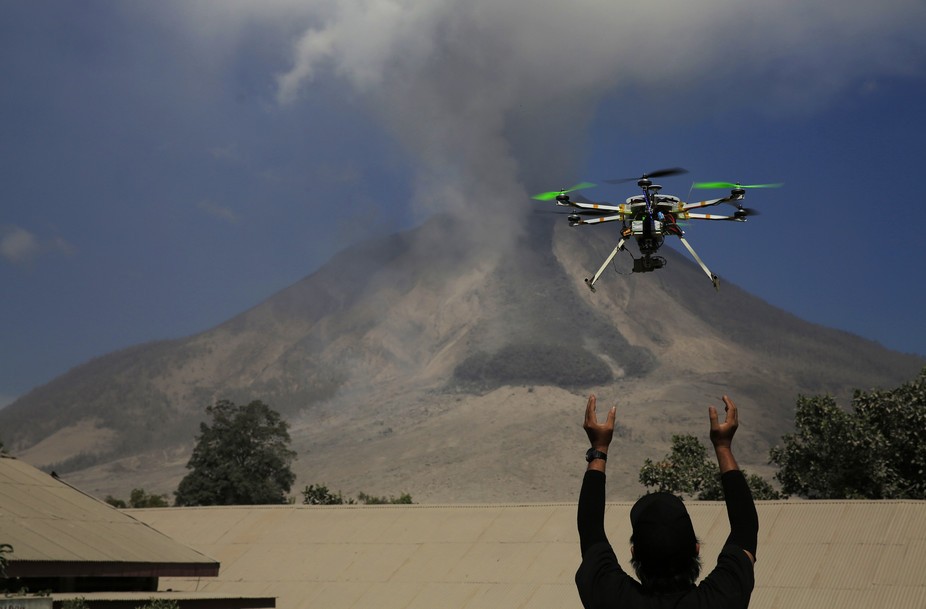 By Elizabeth Basha, University of the Pacific.

Drones – and promises about drones – seem ubiquitous these days. And some of what we associate with drones comes with varying degrees of scariness.

We think of automated planes shooting missiles, drones flying near sensitive nuclear power plants or quadcopters crashing into crowds while filming. If we think about everyday possibilities, we envision toys for children or companies promising deliveries, which sounds like a futuristic version of Hitchcock’s horror film “The Birds.”

However, drones – or, to use the technical term, unmanned aerial vehicles (UAVs) – show promise to help with a large number of societal and environmental problems.

As a researcher in aerial robotics, I’m trying to bring some cutting-edge ideas for using drones closer to reality. Some of these projects aim to keep sensors alive, measure hazardous or remote environments, and deal with scenarios that would be dangerous to humans.

Links to power and data

As our world becomes more filled with sensors – such as on roads and bridges, as well as machines – it will be important to ensure the increasingly distributed monitoring devices have power. Here, drones can help. UAVs can provide wireless recharging to hard-to-access locations such as sensors monitoring bridges or floating sensors on lakes.

Dr. Carrick Detweiler at the University of Nebraska-Lincoln and I have developed a system that allows a UAV to fly to a bridge, identify which battery to charge, and wirelessly recharge it, in a manner similar to those pads on which you can just drop your cellphone.

Over time, the UAV can visit repeatedly, recharging all of the batteries and keeping all the sensors live. That will provide more data to determine when the bridge needs repair. Lack of even one or two key pieces of data can make the rest of the monitoring less helpful, so having functioning, charged sensors is critical to keeping the information flowing.

Our ongoing research also explores how to retrieve measurements from floating sensors, which will allow us to monitor water quality. Similar to working with bridge monitors, the UAV flies over the sensors, collecting data from each one and returning to a base station.

This speeds up data processing, and improves data collection: without the UAV, researchers would have to get in a boat to collect all of the sensors. This is tedious and can be expensive, as the scientists need to drive a boat to a boat ramp, spend all day collecting the data from the sensors, reset the sensors and then analyze the data.

If a sensor has failed in the time since the last visit, the scientist will discover this only when collecting data and will have lost all potential data, creating a hole in the data set and making it more difficult for the scientist to understand that environment. With a UAV, the scientist can relax in her office, send the UAV out for data on a daily basis, quickly identify failed sensors and have the UAV replace those sensors. The likelihood of gathering a good set of data that the scientist can use to learn more about our environment then increases.

In addition to supporting monitoring devices, UAVs can take measurements themselves. Research at UNL is using UAVs to measure agricultural crop heights; Arizona State University scholars are gathering remote imagery to study the role of water in the environment; and Swiss researchers are mapping forest trails.

Without UAVs, these tasks are harder. Crop heights would require farmers to visit all of their fields; ecohydrology would need expensive satellite or plane data collection; and forest trail mapping would require regular confirmation from hikers. These are only a few of the many ways that UAVs can help gather hard-to-measure things in hard-to-reach locations.

UAVs can also help respond to disasters. We are exploring how UAVs can monitor rivers to predict floods, an extension of our prior work that only used sensors.

Timely prediction of flooding requires extensive data, something easily obtainable in urban, developed areas. For rural and less developed areas, though, the infrastructure to measure rivers and weather for prediction is often too expensive. UAVs can supplement measurements to easily provide the appropriate information to improve predictions and save lives.

Dr. Detweiler is also looking at how to start controlled burns with UAVs, to help fight wildfires and help with land management. Fire breaks help restrict wildfire movement, but creating them is dangerous to firefighters who are directly in the line of the fire.

A UAV can fly close to the fire and drop small capsules in precise locations. Those capsules self-ignite and start a small controlled burn. Firefighters do not have to get close at all; they just have to identify the location for the UAV.

They can also help with more man-made disasters. A group at DePaul University uses UAVs to monitor the Dead Sea and reveal archaeological sites that are being looted. Typically solving this problem would use satellites, where measurements are expensive and rare. UAVs provide more frequent and cheap options that could allow archaeologists to save these sites.

As promising as UAVs are, though, much of the potential of these systems remains distant. Until the FAA decides how best to manage these systems (especially in the commercial context), UAVs will not fly around freely, especially out of the eyesight of a pilot. In addition, technical challenges remain, including reliable methods for avoiding obstacles and handling changing weather conditions (such as sudden high winds).

Overall, UAVs have great potential for the good and useful. Hopefully, we remember that when the news focuses on the dangerous and frivolous.

Elizabeth Basha, Professor of Electrical and Computer Engineering, University of the Pacific