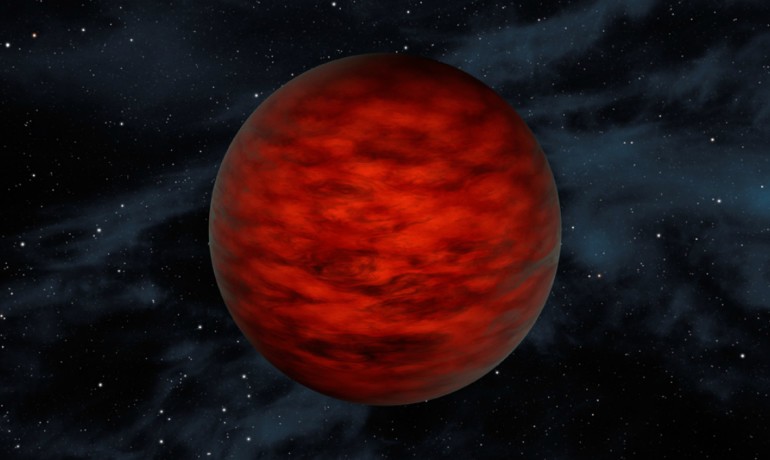 Our galaxy may have billions of free-floating planets that exist in the darkness of space without any companion planets or even a host sun.

But scientists say it’s possible that some of those lonely worlds aren’t actually planets but rather light-weight stars called brown dwarfs.

Take, for example, the newfound object called WISEA 1147. It’s estimated to be between roughly five to 10 times the mass of Jupiter.

WISEA 1147 is one of the few free-floating worlds where astronomers can begin to point to its likely origins as a brown dwarf and not a planet. Because the object was found to be a member of the TW Hydrae family of very young stars, astronomers know that it is also very young—only 10 million years old.

And because planets require at least 10 million years to form, and probably longer to get themselves kicked out of a star system, WISEA 1147 is likely a brown dwarf. Brown dwarfs form like stars but lack the mass to fuse atoms at their cores and shine with starlight.

“With continued monitoring, it may be possible to trace the history of WISEA 1147 to confirm whether or not it formed in isolation,” says Adam Schneider of the University of Toledo in Ohio, lead author of a new study in the Astrophysical Journal.

HOW MANY ARE OUT THERE?

Of the billions of possible free-floating worlds thought to populate our galaxy, some may be very low-mass brown dwarfs, while others may in fact be bona fide planets, kicked out of nascent solar systems. At this point, the fraction of each population remains unknown.

Tracing the origins of free-floating worlds, and determining whether they are planets or brown dwarfs, is a difficult task, precisely because they are so isolated.

“We are at the beginning of what will become a hot field—trying to determine the nature of the free-floating population and how many are planets versus brown dwarfs,” says study coauthor Davy Kirkpatrick of NASA’s Infrared Processing and Analysis Center, or IPAC, at the California Institute of Technology.+4

Astronomers found WISEA 1147 by sifting through images taken of the entire sky by NASA’s Wide-field Infrared Survey Explorer (WISE) in 2010, and the Two Micron All Sky Survey, or 2MASS, about a decade earlier. They were looking for nearby, young brown dwarfs.

One way to tell if something lies nearby is to check to see if it’s moved significantly relative to other stars over time. The closer an object, the more it will appear to move against a backdrop of more distant stars. By analyzing data from both sky surveys taken about 10 years apart, the close objects jump out.

AN EASIER WAY TO STUDY EXOPLANETS

Finding low-mass objects and brown dwarfs is also well suited to WISE and 2MASS, both of which detect infrared light. Brown dwarfs aren’t bright enough to be seen with visible-light telescopes, but their heat signatures light up when viewed in infrared images.

The brown dwarf WISEA 1147 was brilliantly “red” in the 2MASS images (where the color red had been assigned to longer infrared wavelengths), which means that it’s dusty and young.

“The features on this one screamed out, ‘I’m a young brown dwarf,’” says Schneider.

After more analysis, the astronomers realized that this object belongs to the TW Hydrae association, which is about 150 light-years from Earth and only about 10 million years old. That makes WISEA 1147, with a mass between about five and 10 times that of Jupiter, one of the youngest and lowest-mass brown dwarfs ever found.

Another reason that astronomers want to study these isolated worlds is that they resemble planets but are easier to study. Planets around other stars, called exoplanets, are barely perceptible next to their brilliant stars. By studying objects like WISEA 1147, which has no host star, astronomers can learn more about their compositions and weather patterns.

“We can understand exoplanets better by studying young and glowing low-mass brown dwarfs,” says Schneider. “Right now, we are in the exoplanet regime.”

Other authors of the study include James Windsor and Michael Cushing of the University of Toledo, and Ned Wright of UCLA, who was also the principal investigator of the WISE mission. Their study is published in the Astrophysical Journal.

Source: Republished from Futurity.org as a derivative work under the Attribution 4.0 International license. Original article posted to Futurity by Whitney Clavin-Caltech/JPL/NASA.