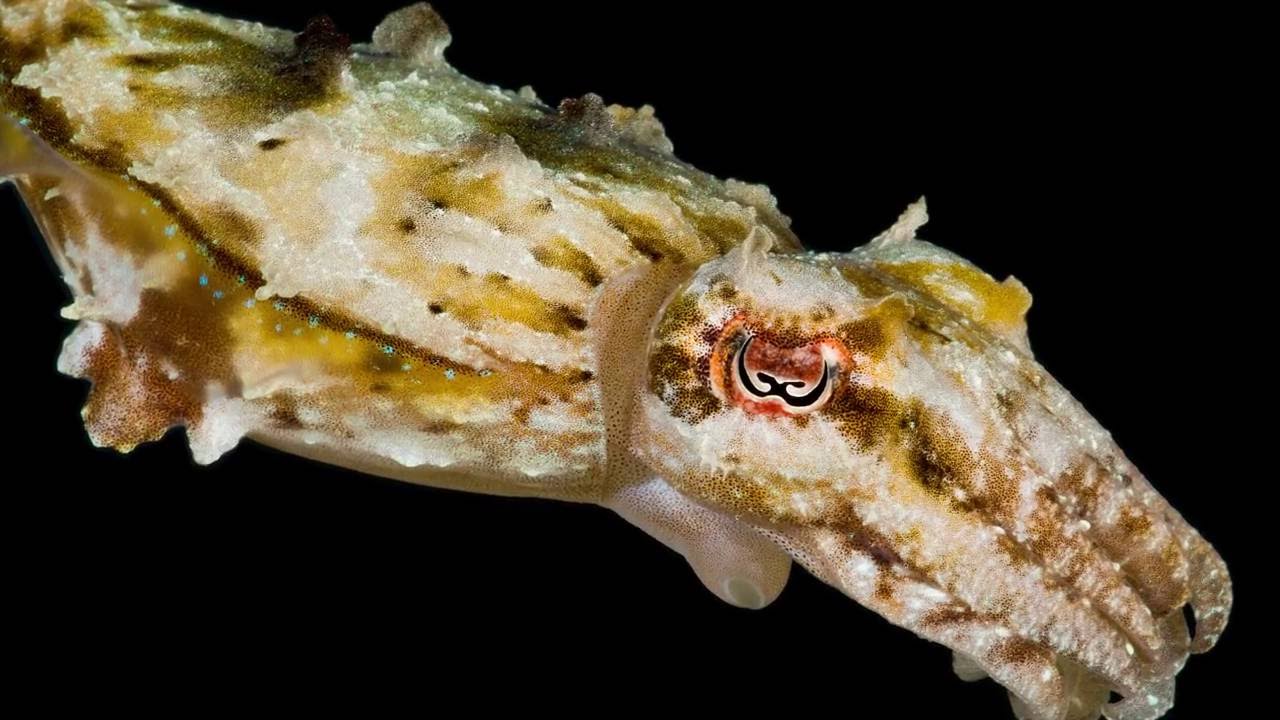 Biologists have puzzled for decades over the paradox of octopus vision. Despite their brilliantly colored skin and ability to rapidly change color to blend into the background, cephalopods like octopuses and squid have eyes with only one type of light receptor—which basically means they see only black and white.

Why would a male risk flashing its bright colors during a mating dance if the female can’t even see him—but a nearby fish can, and quickly gulps him down? And how could these animals match the color of their skin with their surroundings as camouflage if they can’t actually see the colors?

A new study shows that cephalopods may actually be able to see color—just differently from any other animal.

Their secret? An unusual pupil—U-shaped, W-shaped, or dumbbell-shaped—that allows light to enter the eye through the lens from many directions, rather than just straight into the retina.

Humans and other mammals have eyes with round pupils that contract to pinholes to give us sharp vision, with all colors focused on the same spot. But as anyone who’s been to the eye doctor knows, dilated pupils not only make everything blurry, but create colorful fringes around objects—what is known as chromatic aberration.

This is because the transparent lens of the eye—which in humans changes shape to focus light on the retina—acts like a prism and splits white light into its component colors. The larger the pupillary area through which light enters, the more the colors are spread out. The smaller our pupil, the less the chromatic aberration. Camera and telescope lenses similarly suffer from chromatic aberration, which is why photographers stop down their lenses to get the sharpest image with the least color blurring.

Cephalopods, however, evolved wide pupils that accentuate the chromatic aberration and might have the ability to judge color by bringing specific wavelengths to a focus on the retina, much the way animals like chameleons judge distance by using relative focus. They focus these wavelengths by changing the depth of their eyeball, altering the distance between the lens and the retina, and moving the pupil around to changes its off-axis location and thus the amount of chromatic blur.

“We propose that these creatures might exploit a ubiquitous source of image degradation in animal eyes, turning a bug into a feature,” says Alexander Stubbs, a graduate student at the University of California, Berkeley. “While most organisms evolve ways to minimize this effect, the U-shaped pupils of octopus and their squid and cuttlefish relatives actually maximize this imperfection in their visual system while minimizing other sources of image error, blurring their view of the world but in a color-dependent way and opening the possibility for them to obtain color information.”

Stubbs came up with the idea that cephalopods could use chromatic aberration to see color after photographing lizards that display with ultraviolet light, and noticing that UV cameras suffer from chromatic aberration. He teamed up with his father, Christopher Stubbs, professor of physics and of astronomy at Harvard University, to develop a computer simulation to model how cephalopod eyes might use this to sense color. Their findings appear in the Proceedings of the National Academy of Sciences.

They concluded that a U-shaped pupil like that of squid and cuttlefish would allow the animals to determine the color based on whether or not it was focused on its retina. The dumbbell-shaped pupils of many octopuses work similarly, since they’re wrapped around the eyeball in a U shape and produce a similar effect when looking down. This may even be the basis of color vision in dolphins, which have U-shaped pupils when contracted, and jumping spiders.

“Their vision is blurry, but the blurriness depends on the color,” Stubbs says. “They would be comparatively bad at resolving white objects, which reflect all wavelengths of light. But they could fairly precisely focus on objects that are purer colors, like yellow or blue, which are common on coral reefs and rocks and algae. It seems they pay a steep price for their pupil shape but may be willing to live with reduced visual acuity to maintain chromatically-dependent blurring, and this might allow color vision in these organisms.”

“We carried out extensive computer modeling of the optical system of these animals, and were surprised at how strongly image contrast depends on color,” says Christopher Stubbs. “It would be a shame if nature didn’t take advantage of this.”

Alexander Stubbs extensively surveyed 60 years of studies of color vision in cephalopods, and discovered that, while some biologists had reported an ability to distinguish colors, others reported the opposite.

The negative studies, however, often tested the animal’s ability to see solid colors or edges between two colors of equal brightness, which is hard for this type of eye because, as with a camera, it’s hard to focus on a solid color with no contrast. Cephalopods are best at distinguishing the edges between dark and bright colors, and in fact, their display patterns are typically regions of color separated by black bars.

“We believe we have found an elegant mechanism that could allow these cephalopods to determine the color of their surroundings, despite having a single visual pigment in their retina,” he says. “This is an entirely different scheme than the multi-color visual pigments that are common in humans and many other animals. We hope this study will spur additional behavioral experiments by the cephalopod community.”

UC Berkeley’s Museum of Vertebrate Zoology, a Graduate Research Fellow Program grant to Alexander Stubbs, and Harvard University supported the work. Their work is published in the Proceedings of the National Academy of Sciences.

Source: Republished from Futurity.org as a derivative work under the Attribution 4.0 International license. Original article posted to Futurity by Robert Sanders, UC Berkeley.