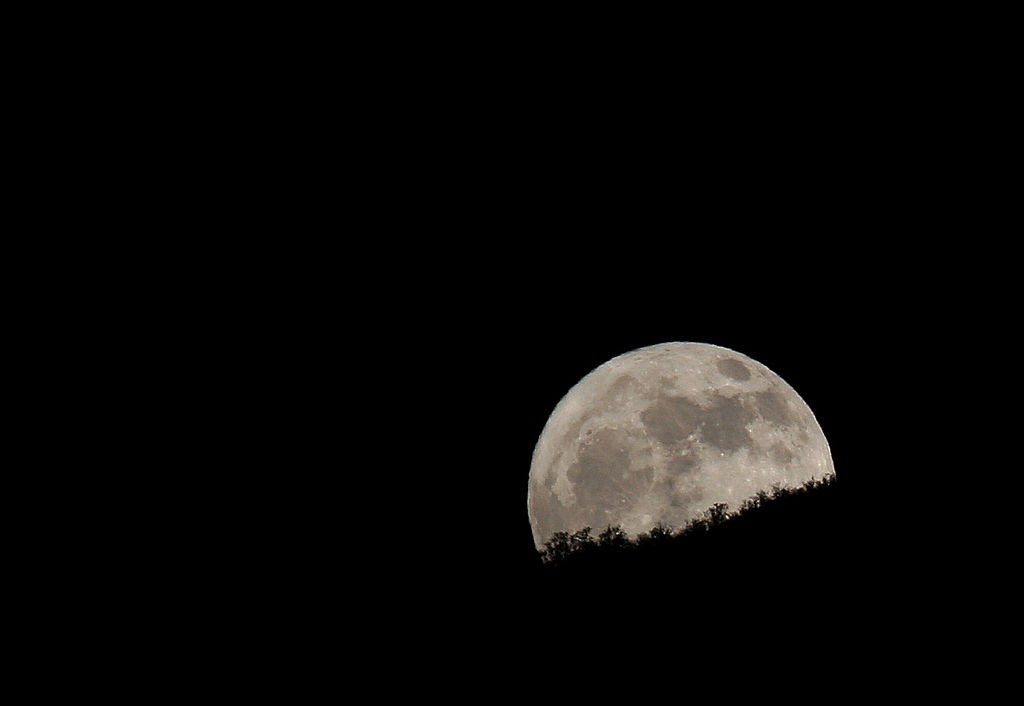 Scientists have new evidence that our moon formed when a planet-sized object struck the infant Earth some 4.5 billion years ago.

Lab simulations show that a giant impact of the right size would not only send a huge mass of debris hurtling into space to form what would become the moon. It would also leave behind a stratified layer of iron and other elements far below Earth’s surface, just like the layer that seismic imaging shows is actually there.

Johns Hopkins University geoscientist Peter Olson says a giant impact is the most prevalent scientific hypothesis on how the moon came to be, but has been considered unproven because there has been no “smoking gun” evidence.

“We’re saying this stratified layer might be the smoking gun,” says Olson, a research professor in earth and planetary sciences. “Its properties are consistent with it being a vestige of that impact.”

“Our experiments bring additional evidence in favor of the giant impact hypothesis,” says Maylis Landeau, lead author of the paper and a postdoctoral fellow at Johns Hopkins when the simulations were done. “They demonstrate that the giant impact scenario also explains the stratification inferred by seismology at the top of the present-day Earth’s core. This result ties the present-day structure of Earth’s core to its formation.”

The argument compares evidence on the stratified layer—believed to be some 200 miles (322 kilometers) thick and 1,800 miles (2,897 kilometers) below the Earth’s surface—with lab simulations of the turbulence of the impact. The turbulence in particular is believed to account for the stratification—meaning there are materials in layers rather than a homogeneous composition—at the top of the planet’s core.

The stratified layer is believed to contain iron and lighter elements, including oxygen, sulfur, and silicon. The existence of the layer is understood from seismic imaging; it is far too deep to be sampled directly.

Up to now, most simulations of the hypothetical big impact have been done in computer models and have not accounted for impact turbulence, Olson says. Turbulence is difficult to simulate mathematically, he adds.

The researchers simulated the impact using liquids meant to approximate the turbulent mixing of materials that would have occurred when a planetary object struck when Earth was just about fully formed—a “proto-Earth,” as scientists call it.

Olson says the experiments depended on the principle of “dynamic similarity.” In this case, that means scientists can make reliable comparisons of fluid flows without doing an experiment as big and powerful as the original Earth impact, which—of course—is impossible. The study in Olson’s lab was meant to simulate the key ratios of forces acting on each other to produce the turbulence of the impact that could leave behind a layered mixture of material.

The researchers conducted more than 60 trials in which about 3.5 ounces of saline or ethanol solutions representing the planetary projectile that hit the Earth were dropped into a rectangular tank holding about 6 gallons of fluid representing the early Earth. In the tank was a combination of fluids in layers that do not mix: oil floating on the top to represent the Earth’s mantle and water below representing the Earth’s core.

Analysis showed that a mix of materials was left behind in varying amounts and that the distribution of the mixture depended on the size and density of the projectile hitting the Earth. The authors argue for a moon-forming projectile smaller or equal to the size of Mars, a bit more than half the size of Earth.

A summary of the study has been published by the journal Nature Geoscience.

Source: Republished from Futurity.org as a derivative work under the Attribution 4.0 International license. Original article posted to Futurity by Arthur Hirsch-Johns Hopkins.