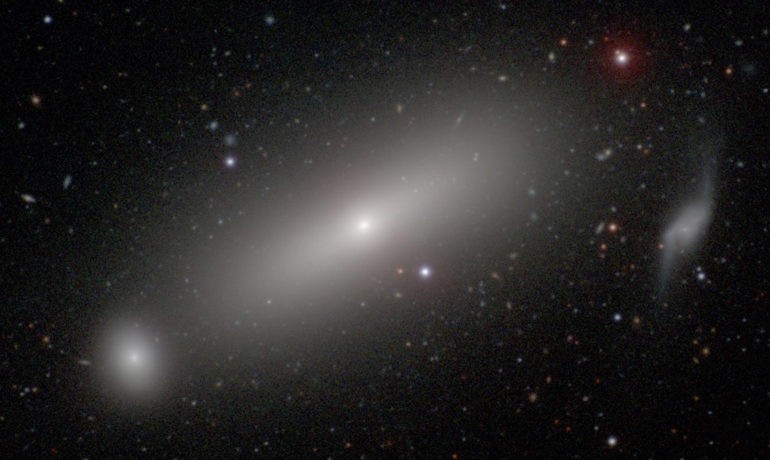 Scientists have measured with unprecedented accuracy a black hole that is about 660 million times as massive as our sun, and is encircled by a cloud of gas moving at about 1.1 million miles per hour.

The supermassive black hole sits at the center of a galaxy dubbed NGC 1332, which is 73 million light-years from Earth.  Scientists made the observations using the Atacama Large Millimeter/submillimeter Array (ALMA) in Chile.

Black holes—the most massive typically found at the centers of galaxies—are so dense that their gravity pulls in anything that’s close enough, including light, says Andrew J. Baker, an associate professor in the astrophysics group of the physics and astronomy department at Rutgers University.

A black hole can form after matter, often from an exploding star, condenses via gravity. Supermassive black holes at the centers of massive galaxies grow by swallowing gas, stars, and other black holes. But, “just because there’s a black hole in your neighborhood, it does not act like a cosmic vacuum cleaner,” Baker says.

Stars can come close to a black hole, but as long as they’re in stable orbits and moving fast enough, they won’t enter it. “The black hole at the center of the Milky Way, which is the biggest one in our own galaxy, is many thousands of light-years away from us,” he says. “We’re not going to get sucked in.”

Scientists think every massive galaxy, like the Milky Way, has a massive black hole at its center, Baker says. “The ubiquity of black holes is one indicator of the profound influence that they have on the formation of the galaxies in which they live.”

Understanding the formation and evolution of galaxies is one of the major challenges for modern astrophysics. The new findings, published in the Astrophysical Journal Letters, have important implications for how galaxies and their central supermassive black holes form. The ratio of a black hole’s mass to a galaxy’s mass is important in understanding their makeup.

Part of understanding supermassive black holes is measuring their exact masses. That lets scientists determine if a black hole is growing faster or slower than its galaxy. If black hole mass measurements are inaccurate, scientists can’t draw any definitive conclusions.

“This has been a very active area of research for the last 20 years, trying to characterize the masses of black holes at the centers of galaxies,” Baker says. “This is a case where new instrumentation has allowed us to make an important new advance in terms of what we can say scientifically.”

Source: Republished from Futurity.org as a derivative work under the Attribution 4.0 International license. Original article posted to Futurity by  Todd Bates-Rutgers.