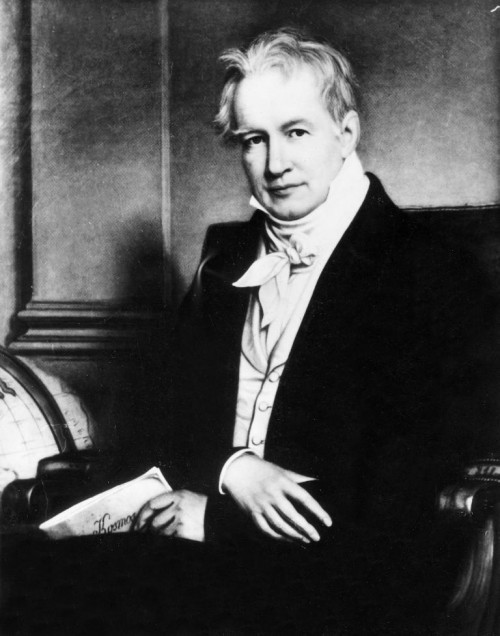 There was a man who left Europe in 1799 to explore what we now call Latin America. He made some prescient predictions about climate change based on what he saw, and was a towering figure in his time. In fact, according to a wonderful interview we found on National Geographic’s website, Darwin would not be Darwin if it weren’t for Alexander Humboldt. National Geographic interviewed Andrea Wulf, author of “The Invention of Nature: Alexander von Humboldt’s New World”  a new book that is attempting to restore Humboldt to his rightful prominence in history.

When asked why Humboldt has slipped between the cracks of history, Wulf replies:

I think there are several reasons. He was the last of the great polymaths who lived at a time when you could hold all the world’s knowledge in your head. As science became specialized, people like Humboldt got pushed to the boundaries.

The other thing, which is probably more important, is that he remained famous in the English-speaking world until World War I, when there was a lot of anti-German sentiment. In Cleveland, in 1859, they celebrated Humboldt’s centennial. But with the outbreak of war, they burned all the German books in the library. And he has never really recovered.

According to Wulf, on his adventures in Latin America, Humboldt ascended every accessible volcano, including Chimborazo, which is just under 21,000 feet. At the time, it was considered the tallest mountain in the world.  Wulf continues:

They have terrible shoes and clothing. It’s snowing and freezing cold. He has an injured foot from a previous climb, his feet are bleeding because the soles of his shoes have been shredded on the jagged rocks, and all the time the peak of Chimborazo is covered in fog.

Then suddenly the fog lifts and they see this snowcapped peak against the blue sky. They also see this huge crevasse in front of them. There’s no way to the top, so they stop there, at around 19,400 feet, about 1,000 feet below the peak. This is still the world record. No one has ever climbed that high. Not even air balloons have been that high. So he’s literally standing on top of the world.

Wulf felt compelled to follow in Humboldt’s footsteps, find out why on the next page…