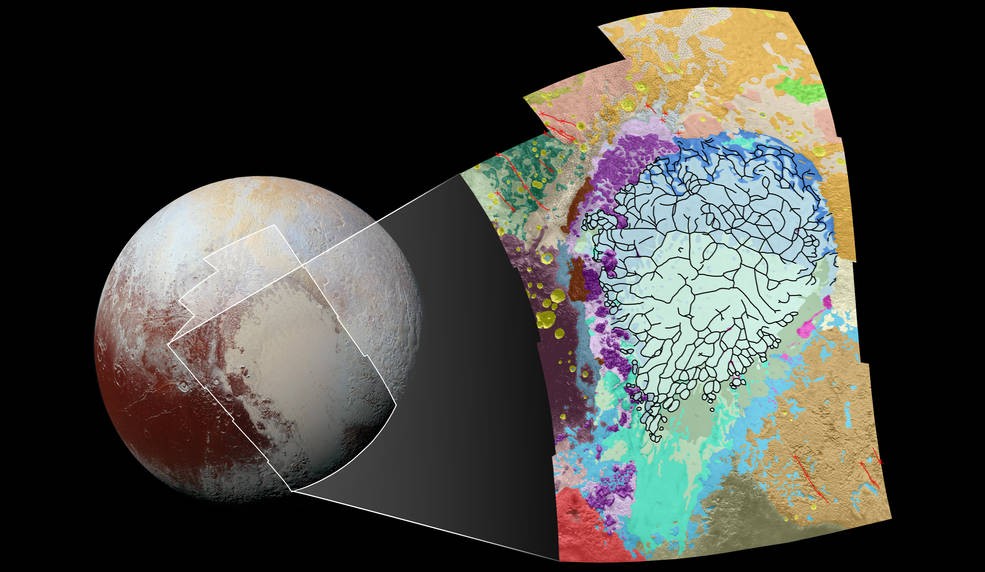 Just in time for Valentine’s Day, NASA has release a new image analysis of the “heart of Pluto” which looks like psychedelic artwork, but is actually some very serious science. This image is a compilation of  12 different images of the heart taken by the Long Range Reconnaissance Imager (LORRI) on the New Horizons spacecraft. The resulting image was then overlaid with colors representing the various types of geological features observed, creating this final image:

This next image shows the location of the analysis in relationship Pluto’s heart:

The NASA website provides a detailed explanation of the image and how scientists are using it to understand more about the nature of Pluto’s geology:

How to make sense of Pluto’s surprising geological complexity? To help understand the diversity of terrain and to piece together how Pluto’s surface has formed and evolved over time, mission scientists construct geological maps like the one shown above.

This map covers a portion of Pluto’s surface that measures 1,290 miles (2,070 kilometers) from top to bottom, and includes the vast nitrogen-ice plain informally named Sputnik Planum and surrounding terrain.  As the key in the figure below indicates, the map is overlaid with colors that represent different geological terrains.  Each terrain, or unit, is defined by its texture and morphology – smooth, pitted, craggy, hummocky or ridged, for example.  How well a unit can be defined depends on the resolution of the images that cover it.  All of the terrain in this map has been imaged at a resolution of approximately 1,050 feet (320 meters) per pixel or better, meaning scientists can map units with relative confidence.

The various blue and greenish units that fill the center of the map represent different textures seen across Sputnik Planum, from the cellular terrain in the center and north, to the smooth and pitted plains in the south.  The black lines represent troughs that mark the boundaries of cellular regions in the nitrogen ice.  The purple unit represents the chaotic, blocky mountain ranges that line Sputnik’s western border, and the pink unit represents the scattered, floating hills at its eastern edge.  The possible cryovolcanic feature informally named Wright Mons is mapped in red in the southern corner of the map.  The rugged highlands of the informally named Cthulhu Regio are mapped in dark brown along the western edge, pockmarked by many large impact craters, shown in yellow.

By studying how the boundaries between units crosscut one another, mission scientists can determine which units overlie others, and assemble a relative chronology for the different units. For example, the yellow craters (at left, on the western edge of the map) must have formed after their surrounding terrain. Producing such maps is important for gauging what processes have operated where on Pluto, and when they occurred relative to other processes at work.

The base map for this geologic map is a mosaic of 12 images obtained by the Long Range Reconnaissance Imager (LORRI) at a resolution of 1,280 feet (about 390 meters) per pixel.  The mosaic was obtained at a range of approximately 48,000 miles (77,300 kilometers) from Pluto, about an hour and 40 minutes before New Horizons’ closest approach on July 14, 2015.

For all the details and even higher resolution images, check out the excellent short article on the NASA website.