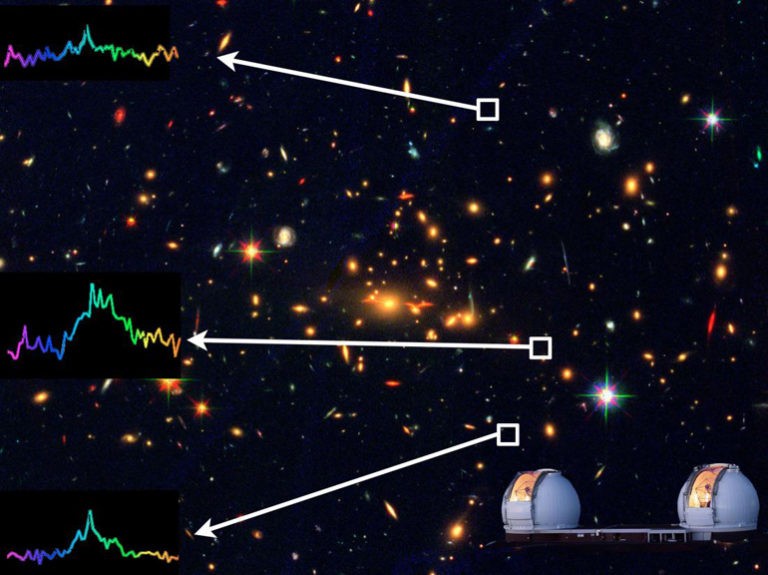 Astronomers have discovered the faintest early-universe galaxy yet and say the new object—seen as it was about 13 billion years ago—could help understand the “reionization epoch” when stars became visible for the first time.

The team was able to see the incredibly faint object using gravitational lensing and a special instrument on the 10-meter telescope at the W.M. Keck Observatory on the summit of Mauna Kea, Hawaii.

Albert Einstein first predicted gravitational lensing. Because gravity can bend the path of light, it’s possible for a distant galaxy to be magnified through the “lens” created by the gravity of another object between it and the viewer.

In this case, the detected galaxy was behind the cluster MACS2129.4-0741, which is massive enough to create three different images of the object. The astronomers were able to show that the three images were of the same galaxy because they showed similar spectra.

It would not have been visible at all if its light was not magnified by the gravitational lens, says Kuang-Han Huang a  postdoctoral researcher at the University of California, Davis.

At 13 billion years old, the galaxy lies near the end of the reionization epoch, during which most of the hydrogen gas between galaxies transitioned from being mostly neutral to being mostly ionized, and the stars appeared for the first time. The discovery shows how gravitational lensing can help us understand the faint galaxies that dominate this important period of the early universe, Huang says.

“This galaxy is exciting because the team infers a very low stellar mass, or only 1 percent of 1 percent of the Milky Way galaxy,” says Marc Kassis, staff astronomer at the Keck Observatory.  “It’s a very, very small galaxy and at such a great distance, it’s a clue in answering one of the fundamental questions astronomy is trying to understand: What is causing the hydrogen gas at the very beginning of the universe to go from neutral to ionized about 13 billion years ago? That’s when stars turned on and matter became more complex.”

The galaxy’s magnified images were originally seen separately in both Keck Observatory and Hubble Space Telescope data. Researchers used the DEIMOS (DEep Imaging and Multi-Object Spectrograph) instrument on the 10-meter Keck II telescope to confirm that the three images were of the same object.

Other researchers from UC Davis and from the Keck Observatory, University of California, Los Angeles, and the Leibniz Institute for Astrophysics were coauthors of the study that is published in Astrophysical Journal Letters.

Source: Republished from Futurity.org as a derivative work under the Attribution 4.0 International license. Original article posted to Futurity by  Andy Fell-UC Davis.