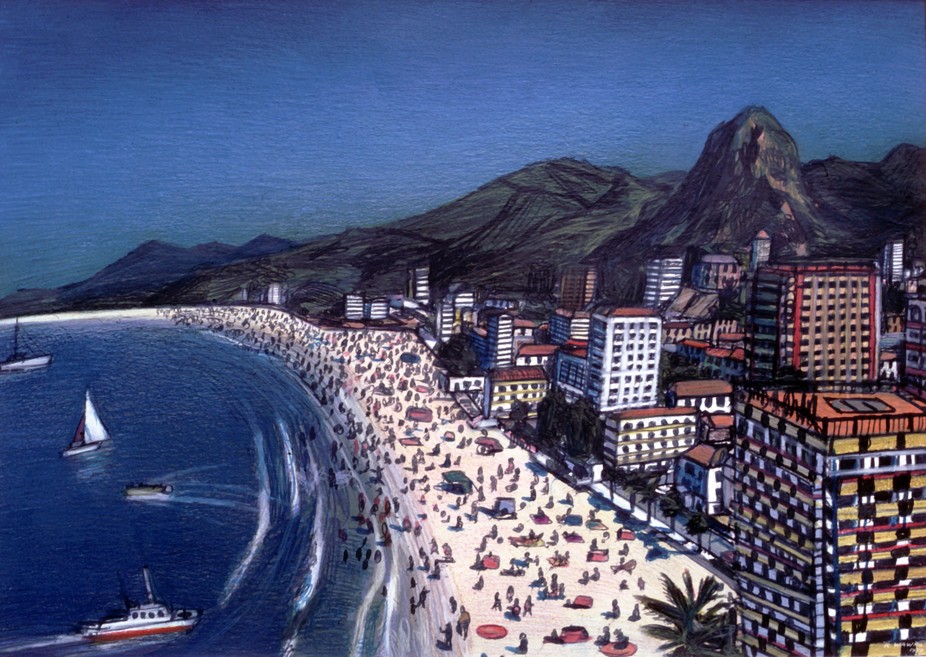 As a toddler growing up in the 1950s, Richard Wawro threw violent tantrums. Often, he would tap the same piano key for long stretches of time.

When he was three, his parents took him for testing at a nearby hospital. They were told that he was moderately to severely retarded. His family, however, never believed that his IQ was as low as the experts claimed.

A special education teacher began working with Richard when he was six. She introduced him to drawing with crayons, which he took to quickly.

He began filling sketchbooks (and the wallpaper of his Scotland home) with startlingly accurate depictions of cartoon characters like Yogi Bear. When Richard was 12, his artwork astounded a visiting artist who said that his drawings were created “with the precision of a mechanic and the vision of a poet.”

Richard could never read or write well. His speech remained limited. But his involvement with the art world spurred his social development. He participated in dozens of exhibitions and became a well-known artist. His artwork was celebrated by the media and in a documentary, “With Eyes Wide Open.” Both Margaret Thatcher and Pope John Paul II owned Wawro’s originals.

Richard was a savant, an individual with a spike in a particular ability combined with an impairment or disability. In Richard’s case, that underlying condition was autism. Autism is a condition characterized by social and communication challenges, like difficulty making eye contact or making conversation, along with repetitive behaviors or intense interests.

It turns out that many savants have autism. In a 2015 paper, the savant expert Darold Treffert reported that among the congenital savants in his registry, 75 percent had an autism spectrum disorder, a term used to describe a group of disorders with variable symptoms and severity.

Not every autistic individual has extraordinary talents.

In fact, autism can be accompanied by serious challenges that last a lifetime (as was also the case for Wawro, whose family handled his daily living needs until he died at age 53).

But when the astounding abilities are there, they are often rooted in extreme memory, excellent attention to detail and passionate interests – traits also linked to autism.

My work has been with child prodigies, those astounding individuals who perform at an adult-professional level in a demanding field before adolescence.

But there’s a key difference between the two. While in savants, these extreme abilities are paired with an underlying impairment or disability, prodigies don’t typically have any such disability.

Still, as I recount in my new book, The Prodigy’s Cousin, I have found the overlap between prodigy and autism to be striking. Even though prodigies are not typically autistic, they have the same excellent memories, extreme attention to detail, and passionate interests linked to autism and autistic savants.

The prodigies’ excellent memories were almost immediately apparent. When I investigated nine prodigies across two studies, each one scored in the 99th percentile for this ability. When this group was expanded to 18 prodigies in a 2014 study, the prodigies’ average working memory score was 140 – north of the 95th percentile.

Reports linking extreme memory and autism date back to the first published reports of Leo Kanner and Hans Asperger, the two scientists credited with identifying autism as an independent condition in the 1940s.

In his landmark 1943 study, Kanner remarked upon his subjects’ “excellent memory for events of several years before, the phenomenal rote memory for poems and names, and the precise recollection of complex patterns and sequences.”

He included a report of a boy, Donald T., with “an unusual memory for faces and names,” who had memorized “an inordinate number of pictures in a set of Compton’s Encyclopedia.” Another, Charles N., could distinguish between 18 symphonies at age one-and-a-half.

Since Kanner’s time, scientists have found that memory in autism is complex. But in a 2015 study, a team of researchers found that more than half of their 200 autistic subjects had notable memories. Treffert has described excellent memory as “integral” for savants in particular.

As part of my 2012 study, the child prodigies I worked with were given the Autism-Spectrum Quotient, a self-administered test designed to measure autistic traits. On attention to detail, they outscored not only the controls, but also those with an autism spectrum disorder.

Child prodigies are also exceptionally passionate about their area of expertise.

Such passionate interests are closely associated with autism. They are even part of autism’s diagnostic criteria.

This trait has been observed since the early days of autism research. Kanner’s 1943 paper includes a description of Alfred L., a child whose mother noted his tendency toward intense interests. As she put it:

He talks of little else while the interest exists, he frets when he is not able to indulge in it (by seeing it, coming in contact with it, drawing pictures of it), and it is difficult to get his attention because of his preoccupation.

This sort of passion can result in prolific output, as it did for Richard Wawro, who created at least 2,453 pictures in his lifetime.

Why do prodigies have autistic relatives?

The link between prodigy and autism could be even deeper than we think.

In addition to drawing from a similar well of cognitive abilities, there appears to be a family link between prodigy and autism. In a study I conducted in 2012, more than half of the prodigies investigated had a close autistic relative. In one instance, a prodigy had five autistic relatives.

The same traits that are celebrated in prodigies – like their excellent attention to detail and the passionate interests – are often recognized as strengths in the context of autism, too, though sometimes families report that the extreme nature of autistic interests can take a toll on family life.

This is a real challenge, as are other aspects of autism. Figuring out the best way to support those with autism and their families is essential.

But let’s remember the strengths of autism as well as the challenges.

Kimberly Stephens, coauthor of The Prodigy’s Cousin, contributed to this piece.