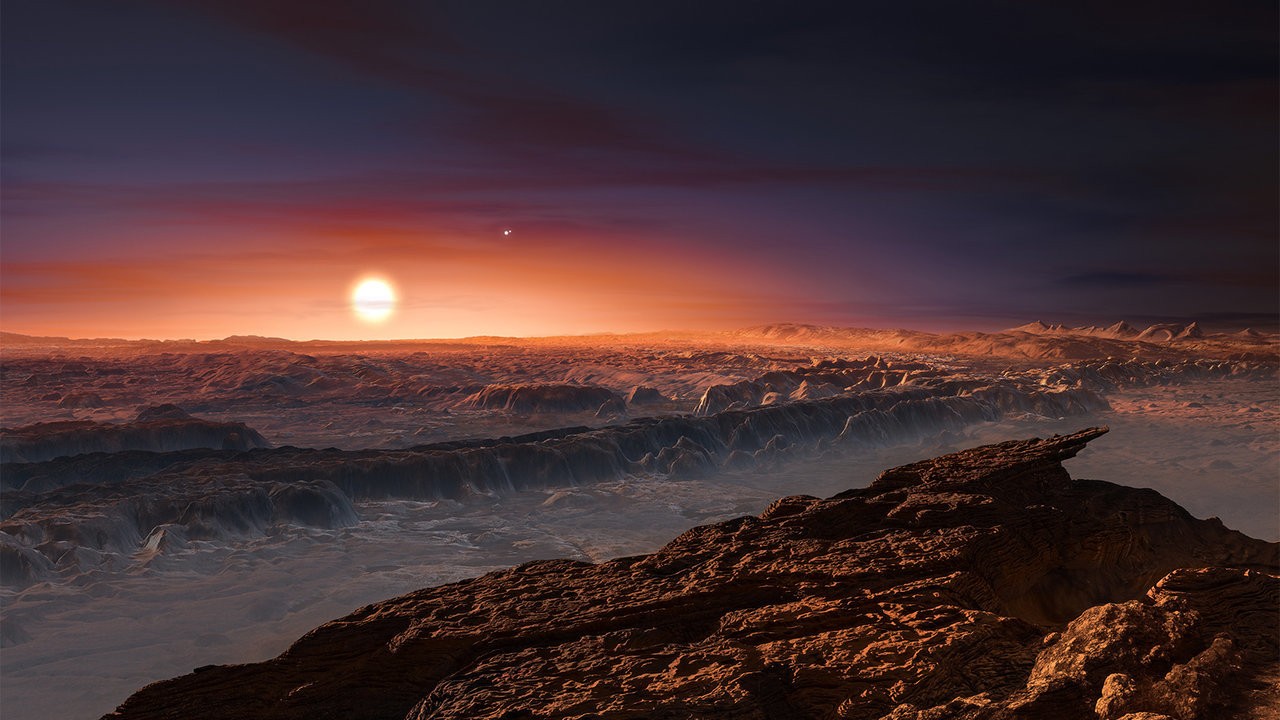 A rocky extrasolar planet with a mass similar to Earth’s was recently detected around Proxima Centauri, the nearest star to our sun. This planet, called Proxima b, is in an orbit that would allow it to have liquid water on its surface, thus raising the question of its habitability. In a study to be published in The Astrophysical Journal Letters, an international team led by researchers at the Marseille Astrophysics Laboratory (CNRS/Aix-Marseille Université) has determined the planet’s dimensions and properties of its surface, which actually favor its habitability.

The team says Proxima b could be an “ocean planet,” with an ocean covering its entire surface, the water perhaps similar to that of subsurface oceans detected inside icy moons around Jupiter and Saturn. The researchers also show that Proxima b’s composition might resemble Mercury’s, with a metal core making up two-thirds of the mass of the planet. These results provide the basis for future studies to determine the habitability of Proxima b.

Proxima Centauri, the star nearest the sun, has a planetary system consisting of at least one planet. The new study analyzes and supplements earlier observations. These new measurements show that this planet, named Proxima Centauri b or simply Proxima b, has a mass close to that of Earth (1.3 times Earth’s mass) and orbits its star at a distance of 0.05 astronomical units (one tenth of the sun-Mercury distance). Contrary to what one might think, such a small distance does not imply a high temperature on the surface of Proxima b because the host star, Proxima Centauri, is a red dwarf with a mass and radius that are only one-tenth that of the Sun, and a brightness a thousand times smaller than the sun’s. Hence Proxima b is in the habitable zone of its star and may harbor liquid water at its surface.

However, very little is known about Proxima b, particularly its radius. It is therefore impossible to know what the planet looks like, or what it is made of. The radius measurement of an exoplanet is normally done during transit, when it eclipses its star. But Proxima b is not known to transit.

There is another way to estimate the radius of a planet. If we know its mass, we can simulate the behavior of the constituent materials. This is the method used by a French-American team of researchers from the Marseille Astrophysics Laboratory (CNRS/Aix-Marseille University) and the Department of Astronomy at Cornell University. With the help of a model of internal structure, they explored the different compositions that could be associated with Proxima b and deduced the corresponding values for the radius of the planet. They restricted their study to the case of potentially habitable planets, simulating dense and solid planets, formed with the metallic core and rocky mantle found in terrestrial planets in our solar system. They also allowed the incorporation of a large mass of water in their composition.

These assumptions allow a wide variety of compositions for Proxima b. The radius of the planet may vary between 0.94 and 1.40 times the radius of the Earth (3,959 miles, or 6,371 kilometers). The study shows that Proxima b has a minimum radius of 3,722 miles (5,990 kilometers), and the only way to get this value is to have a very dense planet, consisting of a metal core with a mass equal to 65 percent of the planet, the rest being rocky mantle (formed of silicate). The boundary between these two materials is then located about 932 miles (1,500 kilometers) depth. With such a composition, Proxima b is very close to the planet Mercury, which also has a very solid metal core. This first case does not exclude the presence of water on the surface of the planet, as on Earth where the water body does not exceed 0.05 percent of the mass of the planet. In contrast, Proxima b can also have a radius of 5,543 miles (8,920 kilometers), provided that it is composed of 50 percent rock surrounded by 50 percent water. In this case, Proxima b would be covered by a single liquid ocean 124 miles (200 kilometers) deep. Below, the pressure would be so strong that liquid water would turn to high-pressure ice before reaching the boundary with the mantle to 1,926 miles (3,100 kilometers) depth. In these extreme cases, a thin gas atmosphere could cover the planet, as on Earth, making Proxima b potentially habitable.

Such findings provide important additional information to different composition scenarios that have been proposed for Proxima b. Some involve a completely dry planet, while others permit the presence of a significant amount of water in its composition. The work of the research team included providing an estimate of the radius of the planet for each of these scenarios. Similarly, this would restrict the amount of water available on Proxima b, where water is prone to evaporation by ultraviolet and X-rays from the host star, which are much more violent than those from the sun.

Future observations of Proxima Centauri will refine this study. In particular, the measurement of stellar abundances of heavy elements (magnesium, iron, silicon) will decrease the number of possible compositions for Proxima b, allowing determination more accurate radius Proxima b.

Source: News release on NASA.gov used under public domain rights and in compliance with the NASA Media Guidelines