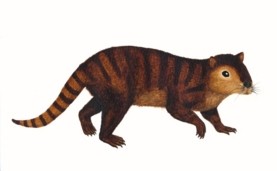 Archaeologists have identified a mammal that was uncovered during a dig in northwestern New Mexico in 2014, and what’s exciting about this find is that the beaver-like mammal is a new member of the list of species that survived the mass extinction at the end of the Cretaceous Period. That is the mass-extinction event that took out the dinosaurs, an event that is widely believed to have been from a comet colliding with the earth.

A very informative article on the Scientific American website provides the details:

A furry, beaverlike mammal that survived the apocalyptic dinosaur-killing space rock that crashed to Earth 66 million years ago hid out in what is now New Mexico, grinding up leafy meals with its enormous molars.

Though small, the mammal is an exciting find, the researchers said. It belongs to a group of rodentlike mammals called multituberculates, named for the numerous cusps, or tubercles, found on their teeth. Multituberculates lived alongside dinosaurs, but managed to survive the mass extinction at the end of the Cretaceous period. They lived for another 30 million years before they, too, went extinct, the researchers said.

“This was a pretty big [multituberculate] and one that clearly ate plants, [which we can tell] because of the complexity of its teeth,” said study co-researcher Steve Brusatte, a paleontologist at the University of Edinburgh in Scotland.

University of Nebraska-Lincoln undergraduate Carissa Raymond discovered the fossil during a 2014 dig in northwestern New Mexico, a place rich with dinosaur and mammal fossils, Brusatte said.

The new fossil is dated to between 65.5 million and 66 million years ago, or just after the dinosaur-killing asteroid hit Earth, he said.

“It lived only a couple hundred thousand years after the extinction, so it’s kind of neat to find a fairly large [mammal]—we’re talking beaver size,” Brusatte said.

The article goes on to describe the details of this exciting find, you can read the excellent full article on the Scientific American website.