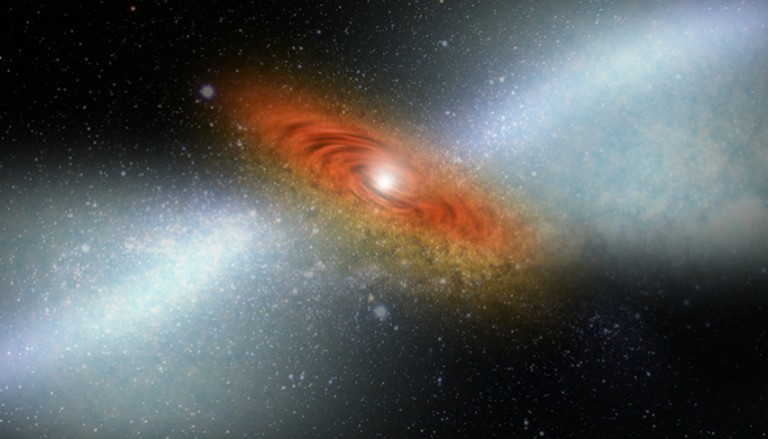 Intense radiation from quasars has likely caused the precipitous slowdown of star formation in the universe that started some 11 billion years ago.

New observations suggest that the exceptionally powerful radiation and galaxy-scale winds emitted by quasars—the most luminous objects in the universe—heat up clouds of dust and gas, preventing the material from cooling, forming denser clouds, and eventually becoming new stars, researchers say.

“I would argue that this is the first convincing observational evidence of the presence of quasar feedback when the universe was only a quarter of its present age, when the cosmic star formation was most vigorous,” says Tobias Marriage, assistant professor of physics and astronomy at Johns Hopkins University.

While the new findings are not absolutely conclusive, scientists believe the evidence is compelling. And they’re are excited.

“It’s like finding a smoking gun with fingerprints near the body, but not finding the bullet to match the gun,” Marriage saiys

Quasars are incredibly bright, active, and distant. They are believed to be areas immediately around supermassive black holes in the centers of immense galaxies formed when smaller galaxies merge. They can emit more electromagnetic energy than 100 normal galaxies, and be more than a trillion times brighter than the sun, according to NASA.

“IT’S LIKE FINDING A SMOKING GUN WITH FINGERPRINTS NEAR THE BODY, BUT NOT FINDING THE BULLET TO MATCH THE GUN.”

Galaxies reached their busiest star-making pace about 11 billion years ago, then slowed down. A team of astronomers more than three years ago estimated that the pace of star formation observed now is one-thirtieth as fast as when it peaked. The question of what happened has puzzled scientists for years—but the chief suspect has been the quasar feedback process, Marriage says.

Investigators looked at information on 17,468 galaxies and examined a tracer of energy known as the Sunyaev-Zel’dovich Effect. The phenomenon, named for two Russian physicists who predicted it nearly 50 years ago, appears when high-energy electrons disturb the cosmic microwave background. The CMB is a pervasive sea of microwave radiation, a remnant from the superheated birth of the universe some 13.7 billion years ago.

The thermal energy levels were analyzed to see if they rise above predictions for what it would take to stop star formation. A large number of galaxies were studied to give the study statistical heft, says graduate student Devin Crichton, lead author of the new paper published in the Monthly Notices of the Royal Astronomical Society. “For feedback to turn off star formation, it must be occurring broadly.”

To take the faint temperature measurements that would show the Sunyaev-Zel’dovich Effect, the team used information gathered by two ground-based telescopes and one receiver mounted on a space observatory. Using several instruments with different strengths in search of the SZ Effect is relatively new, Marriage says. “It’s a pretty wild sort of thermometer.”

Information gathered in the Sloan Digital Sky Survey by an optical telescope at the Apache Point Observatory in New Mexico was used to find quasars. Thermal energy and evidence of the SZ Effect were found using information from the Atacama Cosmology Telescope, an instrument designed to study the CMB that stands in the Atacama Desert in northern Chile. To focus on the dust, investigators used data from the SPIRE, or Spectral and Photometric Imaging Receiver, on the Herschel Space Observatory.

The National Science Foundation, Princeton University, the University of Pennsylvania. and the Canada Foundation for Innovation supported the work.

Source: Republished from Futurity.org as a derivative work under the Attribution 4.0 International license. Original article posted to Futurity by Arthur Hirsch-Johns Hopkins.