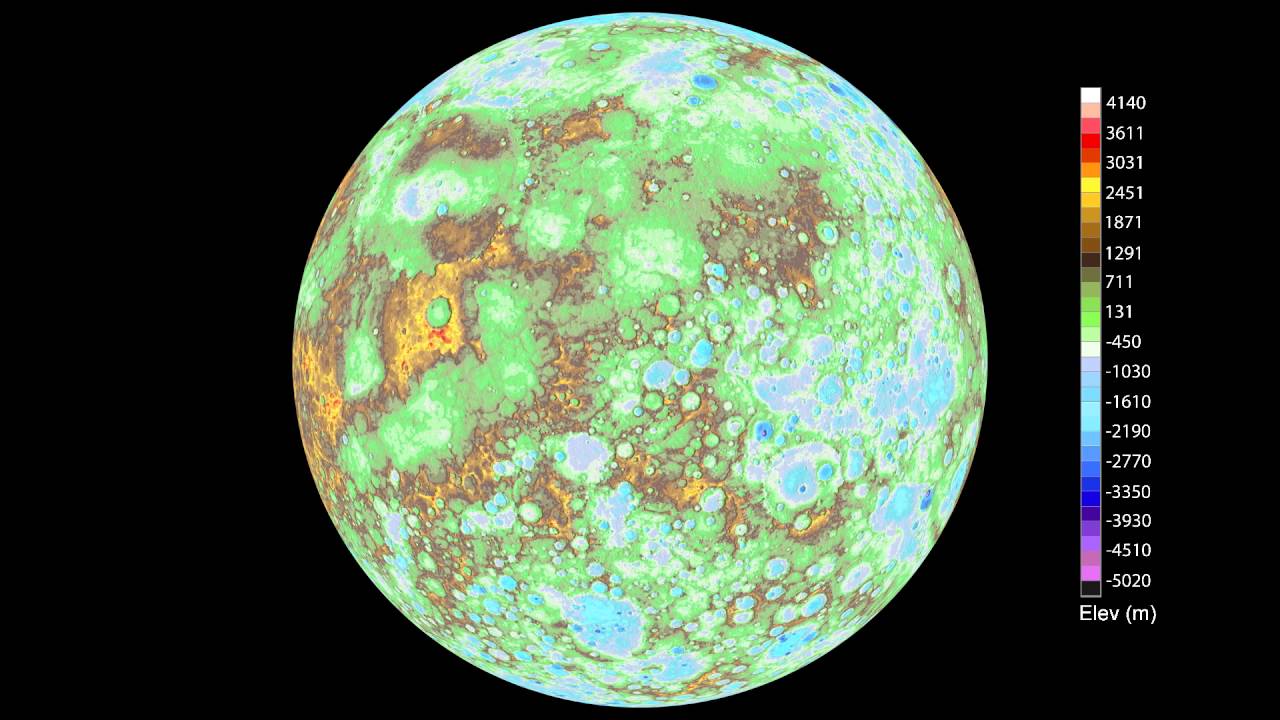 NASA has released the first global digital model of Mercury’s peaks and valleys, revealing in stunning detail the topography of the innermost planet.

The model, compiled from more than 100,000 images taken by the Messenger probe during more than four years in orbit around Mercury, is represented in an animation showing the planet’s high and low points and everything in between.

The model and other new data pave the way to explore and fully explain the planet’s geologic history, scientists say.

“The wealth of these data … will continue to enable exciting scientific discoveries about Mercury for decades to come,” says Susan Ensor, manager of the Messenger science operations center and a software engineer at the Johns Hopkins University Applied Physics Laboratory.

The model shows that Mercury’s highest elevation is 4.48 kilometers (2.78 miles) above average elevation, at a point just south of the equator in some of the planet’s oldest terrain. The lowest, 5.38 kilometers (3.34 miles) below Mercury’s average, is on the floor of Rachmaninoff basin, an area suspected to host some of the most recent volcanic deposits on the planet.

Messenger launched in 2004 and in 2011 became the first spacecraft to orbit the planet closest to the sun. After circling the planet for more than four years—a mission three years longer than initially planned—it fell to the surface on April 30, 2015. Johns Hopkins APL built and operated the spacecraft and manages the mission for NASA.

Although Mercury is rocky like Earth, Venus, and Mars, the planet is quite different from Earth in other ways—far smaller, denser, and, because of a lack of atmosphere, far hotter on its sun-facing side and colder on the night side. It also has the oldest surface among the terrestrial planets. Understanding how it is different from Earth is crucial to understanding the formation and evolution of planets in the solar system.

Researchers have also released a new map providing an unprecedented view of the region near Mercury’s north pole.

“Messenger had previously discovered that past volcanic activity buried this portion of the planet beneath extensive lavas, more than a mile deep in some areas and covering a vast area equivalent to approximately 60 percent of the continental United States,” says Nancy Chabot of APL.

Because the region is near Mercury’s north pole, the sun is always low on the horizon there, casting long shadows that can obscure the color of the rocks. The new map is produced from photos by Messenger’s Mercury Dual Imaging System, carefully captured through five different narrow-band color filters when the shadows were relatively short. The map reveals Mercury’s northern volcanic plains in striking color.

“This has become one of my favorite maps of Mercury,” says Chabot, instrument scientist for the imaging system. “Now that it is available, I’m looking forward to it being used to investigate this epic volcanic event that shaped Mercury’s surface.”

Source: Republished from Futurity.org as a derivative work under the Attribution 4.0 International license. Original article posted to Futurity by Paulette Campbell-Johns Hopkins.