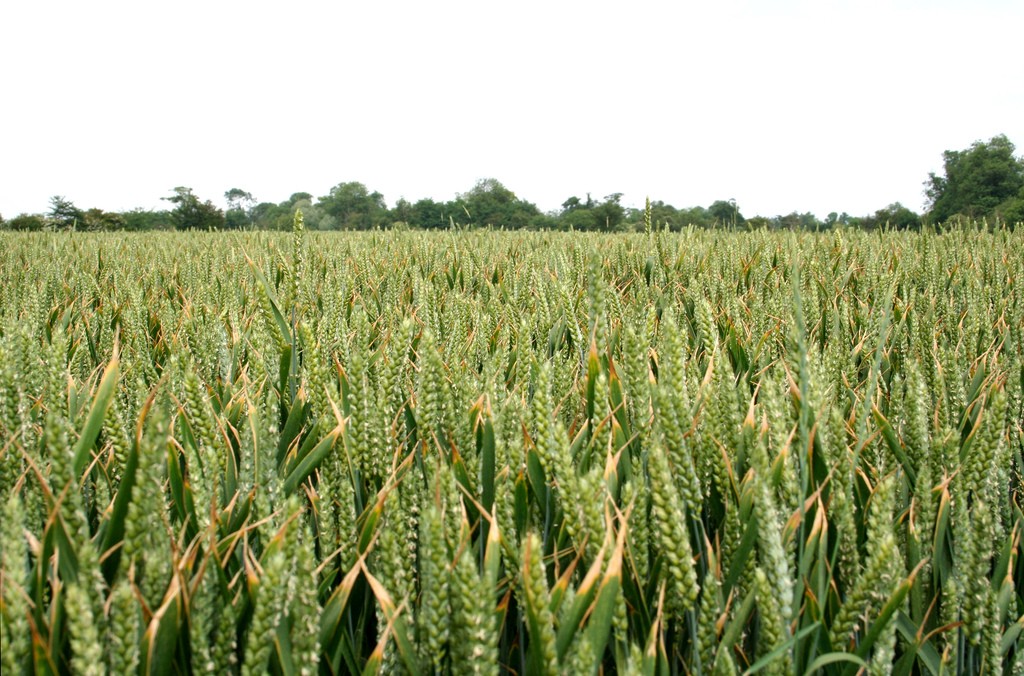 When you pick up the perfect apple in the supermarket it’s easy to forget that plants get sick just like we do. A more realistic view might come from a walk outside during summer: try to find a leaf without a speck, spot or blemish. Tough, huh? Those are the signs of a microscopic battle waged every day in and on plants.

Just like us, plants are covered in microbes. And just like us, plants have evolved an immune system to protect against the dangerous ones. But our current agricultural system works against plants’ natural immune defenses, by limiting the tools plants have to fight back and restricting evolution of new tools.

Pesticides provide us with most of the spotless produce in the grocery store. Even so, many apples still don’t make it to market. About a third end up as juice or applesauce, because they don’t meet the beauty standards of the American consumer. Forget about blemishes – Panama Disease threatens nearly all of the world’s banana production, and the only effective treatment is toxic to the soil.

Scientists studying plant immunity are figuring out how to fight plant diseases without chemical pesticides. Some researchers plan to give our crops vaccines, just like the shots we administer to ourselves to fend off the flu or smallpox. My lab seeks to identify ways plants defend themselves in the wild. With that information, we can use modern breeding techniques and genetic engineering to strengthen the immunity of our crops and gardens.

Over the last 25 years, advances in genetics and molecular biology have revealed new secrets of plant immunity. Computers, searching mountains of plant genetic data, have identified thousands of “resistance genes” that help plants fend off infection.

Resistance proteins also contain a switch to alert the plant that a potential threat has been found. Without the proper lock and key combination, the plant never knows the pathogen is there. If the resistance protein identifies a pathogen, other immune functions and defenses turn on to fight the intruder and attempt to keep the plant from getting “sick.”

Animals’ immunity has a distinct advantage over plants’, though. New antibodies are made fresh by human immune cells to recognize new pathogens we might encounter. Plants are stuck with what they’ve got. All the resistance genes they have were passed down from their parents.

Diversity is a key part of plant immune systems

Bacteria and fungi with short life cycles can evolve more quickly than plants. These pathogens can complete a life cycle in a week and produce millions of offspring. If even one changes or drops the molecular “keys” recognized by a resistance protein, it could start a new family of pathogens capable of infecting the plant.

Resistance genes’ modular nature allows computers to find them, and is also critical for their evolution. This characteristic allows for quick rearrangements and new combinations. The mixing of genes during plant sex can lead to new chimeric resistance genes made of bits and pieces of the parents’ genes. Even as the pathogens change to evade the plant, resistance genes can evolve over the generations to recognize and fight them.

Human beings’ reliance on monoculture for our food supply works against the plants’ natural defenses. Without a variety of resistance gene modules to work with, the plant community struggles to hit on new winning combinations. Not only are we halting the natural evolution of resistance genes, but if every plant in the field is identical, then disease that infects one can infect them all.

The plant pathogens are evolving, but we continue to grow the same plants, with the same resistance genes. To compensate, we rely more and more on pesticides to keep our crop plants healthy. Without new resistance genes our current crops of bananas and potatoes may fail.

Compensating for the diversity our crops lack

Our lab and collaborators seek to find resistance genes in wild relatives of the soybean to breed into commercial varieties. We play the role of natural selection by choosing diverse resistance that protects against economically important diseases.

Breeding can be slow and is especially difficult if the plants are only distantly related. So other labs and companies are using genome editing technologies to introduce new resistance genes quickly.

Take the example of potatoes and late blight, the disease that caused the Irish potato famine in the 19th century. Today, farmers spray fungicide as many as 15 times a year to combat the disease on potatoes. A decade of research identified and isolated a resistance gene in wild potato to fight late blight. Chemical company BASF genetically modified (GM) cultivated potato varieties in an attempt to market a GM, disease-resistant product. The project was abandoned in 2013 due to lack of interest and high regulatory barriers.

US regulators have recently approved new “Innate” potato, a GM variety with resistance genes from wild potato relatives. These potatoes recognize, and fight back against late blight – without the help of fungicide.

The use of genetic modification in food is still controversial. Many think GM plants need more testing; others say they are not natural. McDonald’s will not use the Innate potato for its French fries. Everyone can buy and eat as they choose. But sometimes I want to bite into that perfect red apple or enjoy a bag of French fries. For me, at least, the potato plant fighting for itself with the help of an added gene is more appealing than weekly applications of fungus-killing chemical chlorothalonil.

Some scientists are going a step further. Just this year researchers showed how they customized a resistance gene. In this case, rather than borrowing from nature, the “locks” have been engineered in the lab to recognize a specific pathogen “key.“ Putting the new resistance gene in plants confers synthetic immunity.

This research is still only at the in-the-lab stage, but it opens the hopeful possibility that even if diseases evolve to evade all natural plant resistance, we can engineer tools to stop them.