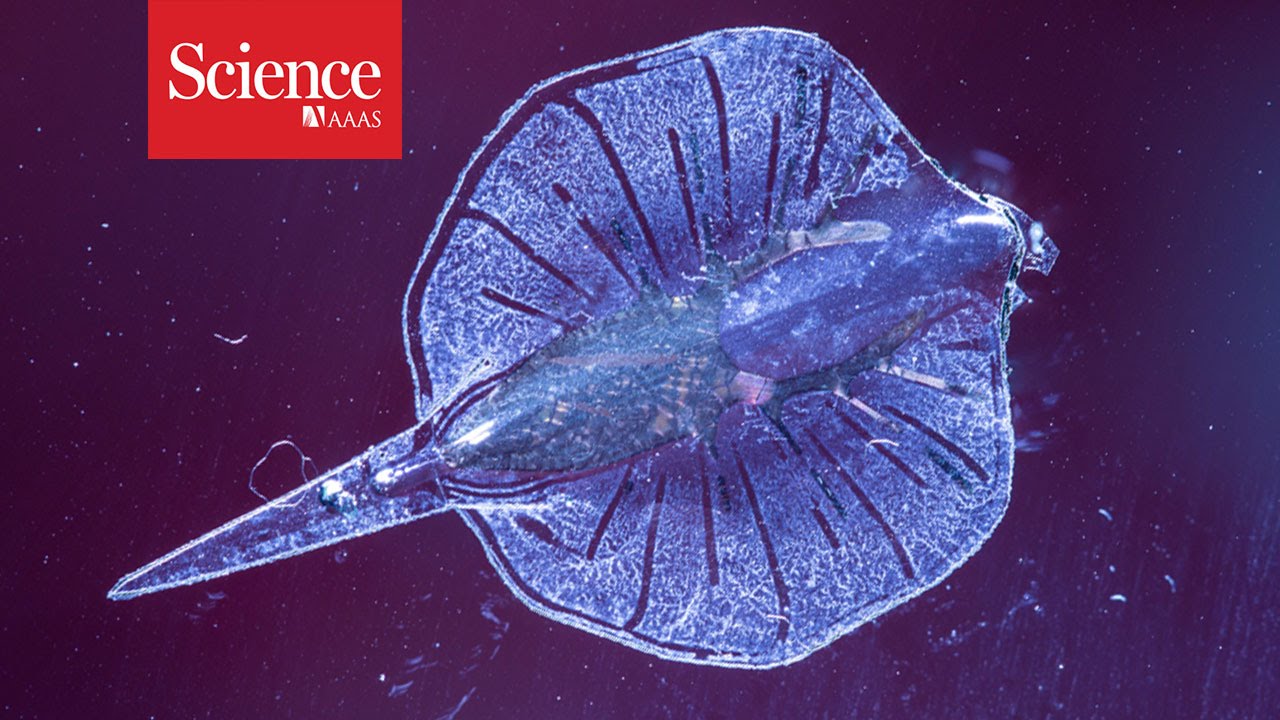 Think of a traditional robot and you probably imagine something made from metal and plastic. Such “nuts-and-bolts” robots are made of hard materials. As robots take on more roles beyond the lab, such rigid systems can present safety risks to the people they interact with. For example, if an industrial robot swings into a person, there is the risk of bruises or bone damage.

Researchers are increasingly looking for solutions to make robots softer or more compliant – less like rigid machines, more like animals. With traditional actuators – such as motors – this can mean using air muscles or adding springs in parallel with motors. For example, on a Whegs robot, having a spring between a motor and the wheel leg (Wheg) means that if the robot runs into something (like a person), the spring absorbs some of the energy so the person isn’t hurt. The bumper on a Roomba vacuuming robot is another example; it’s spring-loaded so the Roomba doesn’t damage the things it bumps into.

But there’s a growing area of research that’s taking a different approach. By combining robotics with tissue engineering, we’re starting to build robots powered by living muscle tissue or cells. These devices can be stimulated electrically or with light to make the cells contract to bend their skeletons, causing the robot to swim or crawl. The resulting biobots can move around and are soft like animals. They’re safer around people and typically less harmful to the environment they work in than a traditional robot might be. And since, like animals, they need nutrients to power their muscles, not batteries, biohybrid robots tend to be lighter too.

Researchers fabricate biobots by growing living cells, usually from heart or skeletal muscle of rats or chickens, on scaffolds that are nontoxic to the cells. If the substrate is a polymer, the device created is a biohybrid robot – a hybrid between natural and human-made materials.

If you just place cells on a molded skeleton without any guidance, they wind up in random orientations. That means when researchers apply electricity to make them move, the cells’ contraction forces will be applied in all directions, making the device inefficient at best.

So to better harness the cells’ power, researchers turn to micropatterning. We stamp or print microscale lines on the skeleton made of substances that the cells prefer to attach to. These lines guide the cells so that as they grow, they align along the printed pattern. With the cells all lined up, researchers can direct how their contraction force is applied to the substrate. So rather than just a mess of firing cells, they can all work in unison to move a leg or fin of the device.

Beyond a wide array of biohybrid robots, researchers have even created some completely organic robots using natural materials, like the collagen in skin, rather than polymers for the body of the device. Some can crawl or swim when stimulated by an electric field. Some take inspiration from medical tissue engineering techniques and use long rectangular arms (or cantilevers) to pull themselves forward.

Others have taken their cues from nature, creating biologically inspired biohybrids. For example, a group led by researchers at California Institute of Technology developed a biohybrid robot inspired by jellyfish. This device, which they call a medusoid, has arms arranged in a circle. Each arm is micropatterned with protein lines so that cells grow in patterns similar to the muscles in a living jellyfish. When the cells contract, the arms bend inwards, propelling the biohybrid robot forward in nutrient-rich liquid.

More recently, researchers have demonstrated how to steer their biohybrid creations. A group at Harvard used genetically modified heart cells to make a biologically inspired manta ray-shaped robot swim. The heart cells were altered to contract in response to specific frequencies of light – one side of the ray had cells that would respond to one frequency, the other side’s cells responded to another.

When the researchers shone light on the front of the robot, the cells there contracted and sent electrical signals to the cells further along the manta ray’s body. The contraction would propagate down the robot’s body, moving the device forward. The researchers could make the robot turn to the right or left by varying the frequency of the light they used. If they shone more light of the frequency the cells on one side would respond to, the contractions on that side of the manta ray would be stronger, allowing the researchers to steer the robot’s movement.

Toughening up the biobots

While exciting developments have been made in the field of biohybrid robotics, there’s still significant work to be done to get the devices out of the lab. Devices currently have limited lifespans and low force outputs, limiting their speed and ability to complete tasks. Robots made from mammalian or avian cells are very picky about their environmental conditions. For example, the ambient temperature must be near biological body temperature and the cells require regular feeding with nutrient-rich liquid. One possible remedy is to package the devices so that the muscle is protected from the external environment and constantly bathed in nutrients.

Another option is to use more robust cells as actuators. Here at Case Western Reserve University, we’ve recently begun to investigate this possibility by turning to the hardy marine sea slug Aplysia californica. Since A. californica lives in the intertidal region, it can experience big changes in temperature and environmental salinity over the course of a day. When the tide goes out, the sea slugs can get trapped in tide pools. As the sun beats down, water can evaporate and the temperature will rise. Conversely in the event of rain, the saltiness of the surrounding water can decrease. When the tide eventually comes in, the sea slugs are freed from the tidal pools. Sea slugs have evolved very hardy cells to endure this changeable habitat.

We’ve been able to use Aplysia tissue to actuate a biohybrid robot, suggesting that we can manufacture tougher biobots using these resilient tissues. The devices are large enough to carry a small payload – approximately 1.5 inches long and one inch wide.

A further challenge in developing biobots is that currently the devices lack any sort of on-board control system. Instead, engineers control them via external electrical fields or light. In order to develop completely autonomous biohybrid devices, we’ll need controllers that interface directly with the muscle and provide sensory inputs to the biohybrid robot itself. One possibility is to use neurons or clusters of neurons called ganglia as organic controllers.

That’s another reason we’re excited about using Aplysia in our lab. This sea slug has been a model system for neurobiology research for decades. A great deal is already known about the relationships between its neural system and its muscles – opening the possibility that we could use its neurons as organic controllers that could tell the robot which way to move and help it perform tasks, such as finding toxins or following a light.

While the field is still in its infancy, researchers envision many intriguing applications for biohybrid robots. For example, our tiny devices using slug tissue could be released as swarms into water supplies or the ocean to seek out toxins or leaking pipes. Due to the biocompatibility of the devices, if they break down or are eaten by wildlife these environmental sensors theoretically wouldn’t pose the same threat to the environment traditional nuts-and-bolts robots would.

One day, devices could be fabricated from human cells and used for medical applications. Biobots could provide targeted drug delivery, clean up clots or serve as compliant actuatable stents. By using organic substrates rather than polymers, such stents could be used to strengthen weak blood vessels to prevent aneurysms – and over time the device would be remodeled and integrated into the body. Beyond the small-scale biohybrid robots currently being developed, ongoing research in tissue engineering, such as attempts to grow vascular systems, may open the possibility of growing large-scale robots actuated by muscle.