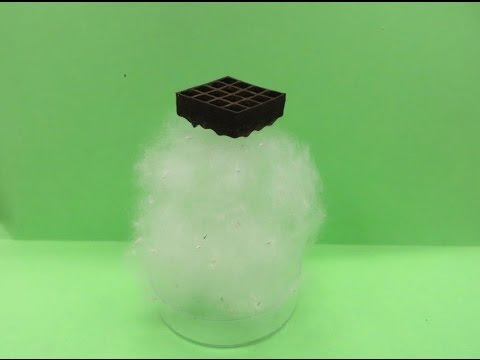 Graphene is the “rock star” of recently discovered materials, but efforts to make 3D objects out of graphene have proven very difficult.

The material, discovered in 2004, is 1 million times thinner than a human hair, 300 times stronger than steel, incredibly lightweight, and it’s the best known conductor of heat and electricity. So, it’s easy to image the potential applications, from basic everyday products all the way up to a space elevator.

Recently, scientists poured graphene oxide suspension, a gel-like form of the material, into freezing molds to create 3D objects. The process works, but only with simple structures that have limited commercial applications.

Another option is to use a 3D printer. In this scenario, scientists typically mix graphene with a polymer or other thickening agent. This helps keep the structure from falling apart. But when the polymer is removed via thermal process, it damages the delicate structure.

A research team may have solved that problem. In the journal Small, they describe how they used a modified 3D printer and frozen water to create lattice-shaped cubes and a three-dimensional truss with overhangs using graphene oxide.

The structures could be an important step toward making graphene commercially viable in electronics, medical diagnostic devices, and other industries.

“Graphene is notoriously difficult to manipulate, but the structures we built show that it’s possible to control its shape in three-dimensional forms,” says Chi Zhou, assistant professor of industrial and systems engineering at the University at Buffalo and a corresponding author of the study.