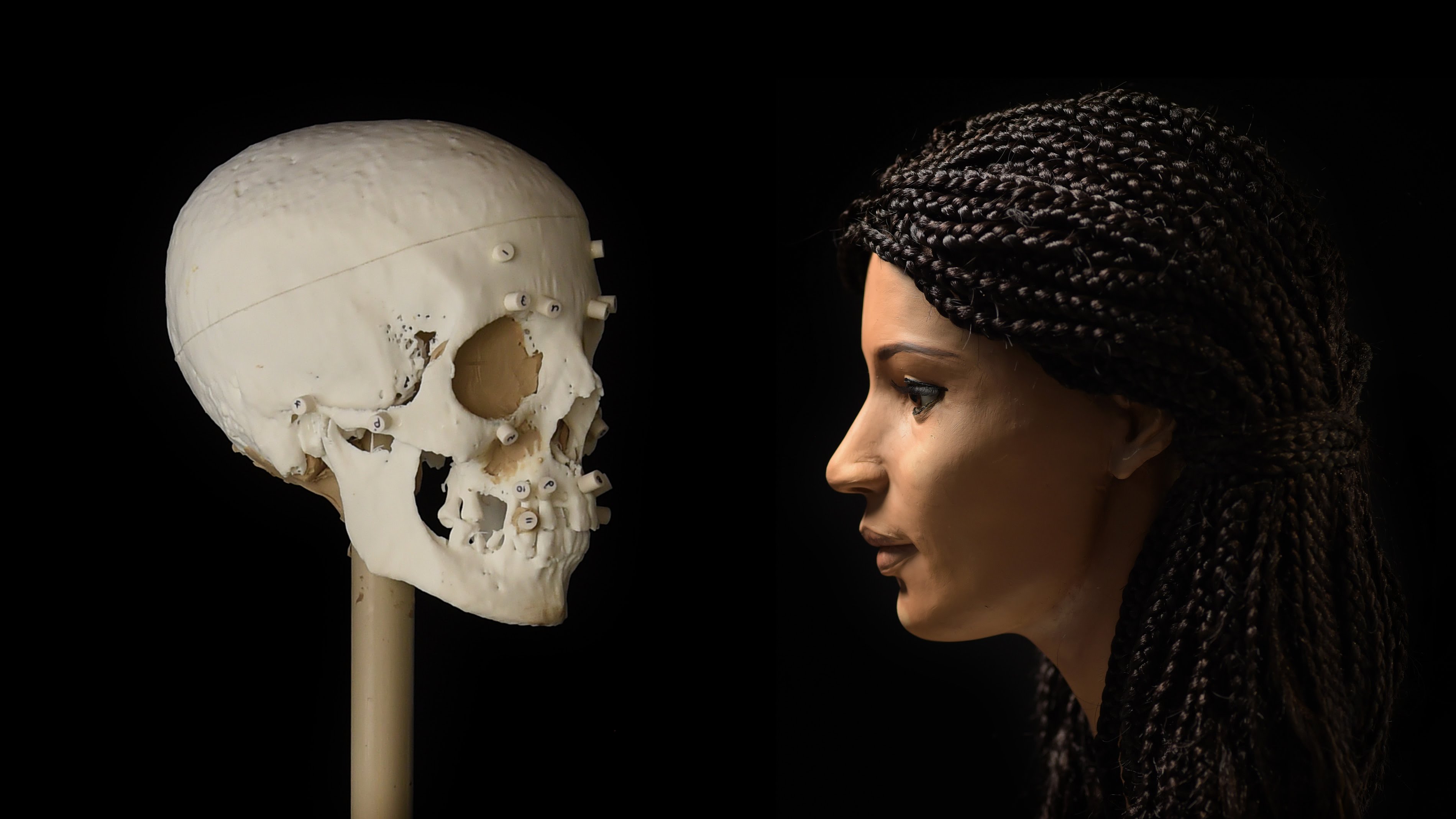 Researchers have produced a reconstruction of the head of an 18- to 25-year-old woman who lived at least 2,000 years ago in ancient Egypt.

They have named her Meritamun, which means beloved of the god Amun. Her face is only the start of the team’s work to answer questions about how she may have died, what diseases she had, when she lived, where she was from, and even what she ate.

“The idea of the project is to take this relic and, in a sense, bring her back to life by using all the new technology,” says Varsha Pilbrow, a biological anthropologist who teaches anatomy in the University of Melbourne’s department of anatomy and neuroscience.

“This way she can become much more than a fascinating object to be put on display. Through her, students will be able to learn how to diagnose pathology marked on our anatomy, and learn how whole population groups can be affected by the environments in which they live.”

How and why the University of Melbourne has a mummified Egyptian head in the basement of its medical building is a mystery. It may well have been part of the collection of Professor Frederic Wood Jones (1879-1954) who before becoming head of anatomy at the University in 1930 had undertaken archaeological survey work in Egypt.

Meritamun is housed in a purpose-built archival container alongside rows of human specimens preserved in glass jars and formaldehyde solution at the Harry Brookes Allen Museum of Anatomy and Pathology, in the School of Biomedical Sciences. She lies face up, as she would have been buried. Even though she is covered in tightly wound bandages and blackened by oil and embalming fluid, her delicate features are clear.

“Her face is kept upright because it is more respectful that way,” says museum curator Ryan Jefferies. “She was once a living person, just like all the human specimens we have preserved here, and we can’t forget that.”

The genesis of the project was Jefferies’ concern that the head, whose origin remains a mystery, could be decaying from the inside without anyone noticing. Removing the bandages wasn’t an option as it would have damaged the relic and further violated the individual who had been embalmed for the afterlife. But the scan revealed the skull to be in extraordinarily good condition. From there the opportunity to use technology to research the mystery of the head was one that was too good to resist.

“The CT scan opened up a whole lot of questions and avenues of enquiry and we realized it was a great forensic and teaching opportunity in collaborative research,” says Jefferies, a parasitologist.

Meritamun was identified as ancient Egyptian by Janet Davey, a forensic Egyptologist from Monash University who is based at the Victorian Institute of Forensic Medicine, where the head was scanned.

Davey determined Meritamun’s gender from the bone structure of her face, identifying such markers as the smallness and angle of the jaw, the narrowness of the roof of her mouth, and the roundness of her eye sockets.

Davey guesses that Meritamun was probably about five feet, four inches tall, given accepted thinking that ancient peoples were generally shorter than people today. If the researchers had bone from her arm, leg, or even just her heel they could have established a more accurate estimate.

Dating her is also difficult. Meritamun has some significant tooth decay that conventional thinking would date her to Greco-Roman times when sugar was introduced after Alexander’s conquest of Egypt in 331 BCE. But honey could also account for the decay. And while mummification was more accessible to Egyptians after Alexander’s time, the fineness of the linen bandages suggests Meritamun was high status enough anyway to be embalmed at the earlier time of the Pharaohs.

Biomedical science masters student Stacey Gorski, under the supervision of Pilbrow, is using forensic pathology to try to uncover how healthy Meritamun was and how she may have died.

Just from reading the CT scans Gorski has been able to see that in addition to two tooth abscesses, there are patches on the skull where the bone had pitted and thinned. It is a clear symptom of anemia—a lack of red blood cells that starves the body of oxygen. The thinning occurs when the bone marrow swells as it goes into overdrive in an effort to produce more red blood cells.

In Meritamun’s case, it may have been caused by parasites such as malaria or the flatworm infection schistosomiasis, both of which would have been hazards in the Nile Delta in ancient times. “The fact that she lived to adulthood suggests that she was infected later in life,” says Gorski. Nevertheless, the parasites and anemia would have left her pale and lethargic at the end.

“Anemia is a very common pathology that is found in bodies from ancient Egypt, but it usually isn’t very clear to see unless you can look directly at the skull,” says Gorski. “But it was completely clear from just looking at the images.”

Without having the rest of Meritamun’s body it will be impossible to know for sure how she died, but the anemia could certainly have been a predisposing factor, as could the abscesses if they had become seriously infected.

‘Giving back some of her identity’

It took 140 hours of printing time on a simple consumer-level 3D printer to produce the skull that has been used to reconstruct Meritamun’s face, not counting the tweaking and design work of the department of anatomy and neuroscience’s imaging technician Gavan Mitchell. Because the 3D printer builds from the bottom up and the print is always more detailed at the top, Mitchell has to print out the skull out in two sections to better capture the detail of the jaws and the base of the skull.

“It has been a hugely rewarding process to be able to transform the skull from CT data on a screen into a tangible thing that can be handled and examined,” says Mitchell.

The printed skull formed the base on which sculptor Jennifer Mann has used all her forensic and artistic skill to reconstruct Meritamun’s face.

“It is incredible that her skull is in such good condition after all this time, and the model that Gavan produced was beautiful in its details,” says Mann.

“It is really poignant work and extremely important for finally identifying these people who would otherwise have remained unknown.”

She cautions that any facial reconstruction can only be an approximation of what someone actually looked like in life, but the results she had at Texas closely matched those of the eventually identified murder victims.

The methodology involves attaching to the printed skull plastic markers to indicate different tissue depths at key points on the face, based on averages in population data. This data is derived from modern Egyptians and has been specifically selected by reconstruction experts from around the world as the best approximation for ancient Egyptians.

It was then about applying the clay according to the musculature of the face and known anatomical ratios based on the actual skull. For example, Meritamun’s nose is squashed almost flat by the tight bandaging, but Mann was able to estimate what her nose would have looked like using calculations based on the dimensions of the nasal cavity. The skull also displays a small overbite that Mann has reconstructed. Meritamun’s ears are based on the CT scan results.

“I have followed the evidence and an accepted methodology for reconstruction and out of that has emerged the face of someone who has come down to us from so long ago. It is an amazing feeling.”

The reconstruction was then cast in a polyurethane resin and painted. The researchers have taken a middle course in the long-running debate on what the predominant skin color of ancient Egyptians may have been, choosing a dark olive hue. The finishing touch was to reconstruct her hair, which has been modeled on that of an Egyptian woman, Lady Rai, who lived around 1570-1530 BCE and whose mummified body is now in the Egypt Museum in Cairo. She wears her hair in tightly-plaited thin braids either side of her head. For the Meritamun reconstruction, replicating Lady Rai’s hair was an all-day job for an African hair salon in Melbourne.

“By reconstructing her we are giving back some of her identity,” says Davey.

Source: Republished from Futurity.org as a derivative work under the Attribution 4.0 International license. Original article posted to Futurity by U. Melbourne.