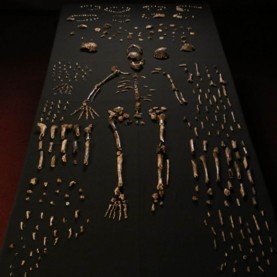 It’s not every day that you find a treasure trove of fossils that turn out to be a newly discovered human ancestor species. In fact, it’s never happened at all exactly like this, according to this excellent article published on the Scientific American website today:

In October 2013 scientists working in South Africa announced that they had discovered a trove of fossil human remains in the pitch-black depths of an underground cave system. They began a rapid recovery effort that yielded some 1,550 specimens of bones and teeth—just a fraction of the material at the site, yet already the largest assemblage of human fossils ever found in all of Africa. Now the team has published its eagerly anticipated analyses of the remains, and the conclusions are startling. The researchers suggest that the fossils represent a previously unknown species in our genus, Homo, one that had a peculiar mix of physical traits and engaged in surprisingly sophisticated behavior for its brain size. But the age of the fossils has yet to be determined, leaving other scientists unsure of what to make of them.

Cavers collected the bones from a difficult-to-reach chamber 30 meters below ground within the Rising Star cave system in South Africa’s Cradle of Humankind region, which is famous for its human fossils. In their paper describing the new remains, published today in the journal eLife, paleoanthropologist Lee Berger of the University of the Witwatersrand in Johannesburg and his colleagues report that the remains include multiples of nearly every element of the skeleton and represent at least 15 individuals. For a field in which even an isolated bone can constitute a major discovery, this find is an absolute windfall.

But where exactly they fit in the human family tree is still up for debate. More about why that is on the next page…